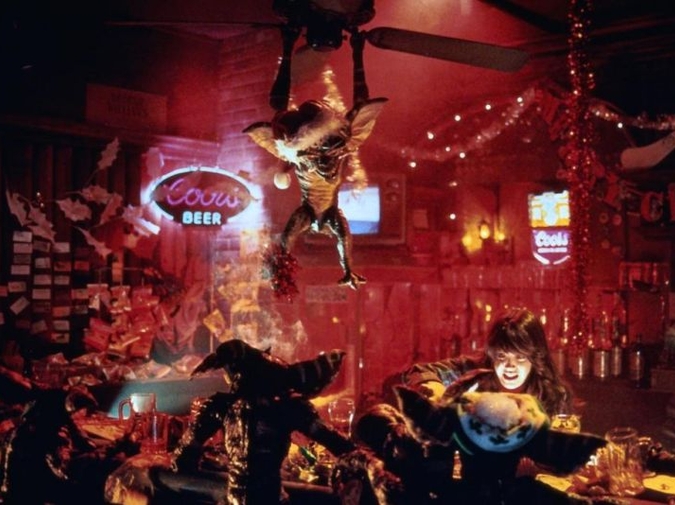 Kingston Falls, USA is the most beautiful matte painting on earth. An idyllic little town with buildings clustered together for warmth on the snow-covered streets, brush-stroke lampposts casting a golden light across the snowfall. But midway through the movie Gremlins, it would appear that all is lost. With almost no resistance, give or take the occasional blender or microwave, the little buggers have conquered the entire town, leaving its inhabitants snowed-in, murdered, or in hiding. Now, free to have their run of the place, they do what I imagine most of us would do had we newly inherited a quaint northeastern village from the harried inhabitants:  they go to the bar.

Swinging back and forth to the rhythm of the jukebox, they tilt back their beer steins, filling their little bellies with suds. (The second gremlin commandment forbidding exposure to liquids is apparently null when it comes to alcohol, thank God). They watch hockey on television under the glow of the twinkle lights and Coors signs. Some of them, having had a few too many, play Tarzan amid the ceiling fans and streamers. One gremlin passes out while his buddies look on, cackling that not-particularly-horrifying cackle that the creatures employ throughout the movie. A few gremlins snarl over cigars and play poker in the corner. Another—a gremlin after my own heart—mopes at a table over a bottle of whiskey. (Jack Daniel’s, but then, he was born out of a sore on his buddy’s spine probably 15 minutes ago. He’ll learn better). We even get a little gremlin cabaret, the less of which is said, the better for all of us.

But the gremlins aren’t here to play around. Leering over by the window, a gremlin in a trench coat exposes himself to Phoebe Cates. (There’s nothing to see, because gremlins reproduce asexually, but still, what was probably intended to be a cute gag plays as genuinely disturbing, the world’s first animatronic sex offender). Hanging from the ceiling by the door, a gremlin in a ski mask pulls a gun on Phoebe’s character, who is a sweet girl-next-door type who holds down a job at the bank in addition to the bar gig. Phoebe makes it out okay, having discovered the gremlins’ aversion to fire while trying to light one of their cigarettes. (A clear message, kids:  smoking kills, even if you’re a gremlin).

For all of the intended horror, this scene isn’t frightening. Even a little. There are several reasons for this, the most obvious and least important being the Spielbergian kitschiness of the entire production. More than that, though, is the setting. Snowy streets, a warm bar at Christmas-time. There is nothing that makes me feel safer and warmer than colored lights hanging along the dark oak paneling of a bar. Being home. This is a nostalgia that no amount of critical thinking can submerge. And I have this same feeling for the film itself, for Gremlins, a movie that I have been watching with my two brothers for years, usually at Christmas. (Movies like Die Hard and Lethal Weapon are widely celebrated as Secret Christmas Movies. Gremlins, for me, has them both beat. It’s not even close).

When my brothers and I were young, we would spend summers and half of the Christmases in Michigan, for visitation with our father. Typically, this meant we stayed with our grandparents. They both worked in a Chinese restaurant in downtown Lansing called The House of Ing, him as a janitor and her as a waitress. Because we couldn’t be left alone, we’d ride with my grandfather, Vern, to pick up my grandmother, Coleta, at the end of her shift. Depending on how long people were lingering over their fried rice, we’d often have to wait, which meant waiting at the bar. The bartender would pour us ginger ales or Pepsis out of that nozzle that looks like a gun, which we thought was incredibly cool. He’d give us little plastic swords with cherries on the end, or—if we were lucky—a cocktail umbrella to play with while we waited for Coleta to finish her shift and sucked up our watered down sodas through those thin red straws.

This bar had regulars—in my head, I see them with that impossible mix of clarity and vagueness that surrounds early childhood memories. They are an indelible mix of trucker hats, square-shaped ‘80s eyeglasses, plaid shirts. They’re friendly and warm. They smile, happy to see Coleta’s cute grandkids playing swordfight with the cocktail toothpicks. It’s a happy memory for me, at least partly. But there’s also sadness there. For one thing, what kind of person was a regular at the bar in back of a Chinese restaurant in Lansing, Michigan, right at the start of the auto industry’s long decline? There’s not much chance that story has a happy ending. And then there’s this thought:  These men were kind, sure, but the reason I remember them, the reason they are still here with me is because my father wasn’t. Isn’t. He made a choice not to be there. He’s still making it.

Nostalgia is a kind of pain. Pain that comforts us. Warm cocoa and blood spurting out of a severed neck. Christmas lights hanging from the oak walls of the dive bar. It is in longing for the familiar, for long gone days of innocence past, that we see just how much we fear change, knowledge, adulthood. The future.

Gremlins is a parable about that fear of change. The metaphor isn’t particularly subtle. Rand Peltzer, father to the movie’s hero, Billy, is responsible for the catastrophic introduction of the gremlins to idyllic Kingston Falls via a misguided purchase of contraband in Chinatown. Peltzer is an inventor, and throughout the movie the gremlins are associated with technology. They fire guns, they short out a disabled woman’s stair lift, they drive bulldozers through people’s houses. They are the invading horde bent on our destruction.

Early in the film, in a scene much more chilling than the antics the gremlins will get up to later, Phoebe Cates helps a slurring, stumbling character named Mr. Futterman out the door of the bar. Futterman has lost his job at the factory, and worse, someone at the garage has had the temerity to use “foreign parts” to service his car—which is, for some reason, a snowplow. Before driving away, he warns Phoebe Cates and Billy, the heroes of the film, to beware of the “gremlins” that the Japanese have been installing in our watches and gadgets. They’re the same gremlins, he says, that they used to take down American planes in WWII. (There’s something so quaint about a technophobic movie from the 1980s: as if blenders and calculator watches were the ultimate in technological dystopia. If they remade the movie today, I imagine Rand Peltzer would be a failed IOS app developer).

Mr. Futterman, drunken and stumbling home in the snow, reminds me of my grandfather. Not because of the drinking. The only thing I ever saw Vern drink was black coffee out of the same yellow mug, the inside stained from thousands of cup-fulls. It’s the trucker’s hat, the puffy vest, the plaid shirt, the constant racist complaints about foreign cars ruining America. It’s all very Michigan. Futterman could be my grandfather, could be any of the Vaseline-lensed faces at the House of Ing bar, could be any of my father’s friends spouting nonsense over beers on his leather couch. The thing they have in common is fear of the future. Wishing to be in the past.

It’s an easy thing to dismiss. It’s easy to say that Futterman deserves to be done in by the gremlins.  The future is not full of monsters, is not made of gremlins stealing away our jobs, “foreigners” taking what is ours and making our town their own. The problem is that, in my own way, I want the past back, too.

Futterman, my grandfather, those men in the bar, they diagnosed the symptoms, just not the disease. It wasn’t the gremlins who closed down Futterman’s factory, it was the bank, run by the husband of the evil woman who tries to get Billy’s dog taken away in an early scene. In Lansing, it wasn’t the Japanese cars taking away jobs and sending the newly unemployed to the House of Ing bar to drown their sorrows, it was failed economic policy and the incompetence of the U.S. auto companies.

If you look closely at a gremlin, you start to see that it’s made of cheap rubber. The teeth are too bendy. The ears don’t seem to animate as much as you would like. As they drink, their heads vibrate slightly, as if the weight of the prop glass is too much for their little animatronic necks. Their eyes are dolls eyes: look inside them, and there’s nothing there. We made them. We are the ones who fed them after midnight. Who poured water onto their backs. Who let them out into the sun.

So when I see those gremlins tearing that bar to shreds, baring their teeth, taking up arms against us, I don’t feel afraid. I can’t help it. I want to go back, too. It’s Christmas. I want to be in that bar. With them. With my brothers. With those long disappeared men laughing their way to last call. With my grandfather, who’s been dead more than 15 years. Drinking a ginger ale with a cherry at the bottom, the Christmas lights reflecting on the ice.