Graceland, Too: Home of the World's Biggest Elvis Fan, and That's Just Some Mickey Mouse Shit 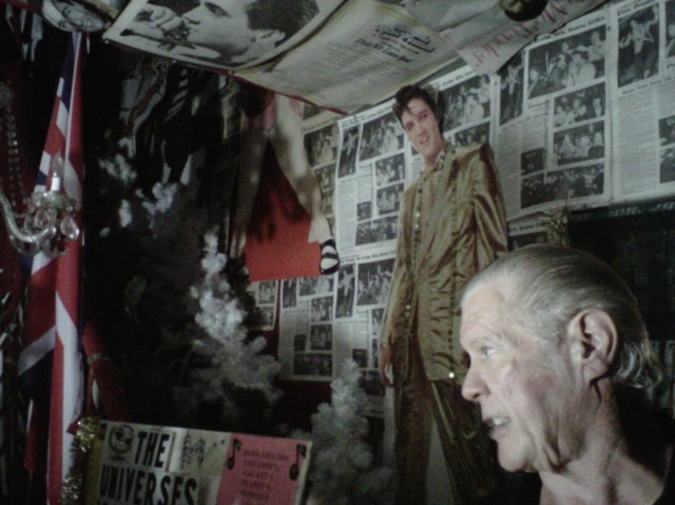 You’re in a car tunneling in the wake of its own headlights. Last you remember, you were in a bar, in Oxford, Mississippi, and you had walked there. As you come to, you realize the car is full, and people are still drinking. The driver is still drinking. (c.f. Mississippi’s open container laws). They’re playing Elvis, or Paul Simon—whichever seems more appropriate—and Faulkner’s Big Woods are illuminated by your vehicle’s headlights and those headlights only. You are going to Graceland Too. You are going to Paul’s house.

Graceland Too is the home of a certain Paul MacLeod, the most dedicated Elvis fan in the world. This is an easy claim to make, because no matter how much you love the King you don’t operate your actual residence as a 24-7-365 museum to the legend, you don’t name your only child “Elvis Aaron Presley,” and you don’t divorce your wife when she presents the ultimatum “me or the collection.” Hell, compared to this guy, nobody even likes Elvis. Anyone who even came close put their head beneath a Cadillac when the King slouched off his porcelain throne (reading about the Shroud of Turin, Paul will tell you.) You see, Paul’s got all this insider knowledge on Mr. Presley, because the two were best buds, or Paul was a stalker, or he was just really lucky to be there for the legendary musician’s last moments. The narrative is never really clear with Paul. What he tells you is usually 99% bullshit and 1% snake-oil salesmanship. He’ll point to an album on the wall and say in a rapid-fire Mississippi backwoods accent, “There’s an album where Elvis answers four questions the backside is blank Time magazine says its the most expensive album in the world 50 million dollars” and then his dentures will slide out and he’ll slurp them back up and clap them into place. He’ll proceed to tell you that Bill Clinton popped round (with his daughter “stoned out of her damn melon,” Paul will be sure to add) because the president’s secret service codename was “Elvis” and that ole Bill offered Paul 100 million dollars for that one album. What was Paul’s answer? “You can take that money, you can burn it.” And when you say, “Wow, Paul, that’s incredible!” he’ll say “No brag, pure fact” and lead you into the next room which, like all rooms in his house, is literally littered with Elvis paraphernalia. The really valuable things (those that Paul claims are in the hundred million dollar range) are locked up, but his equally impressive collection of every time the word “Elvis” came up in the TV Guide (cut out and pasted by Paul himself) just lays around on top of a stack of poster sized pictures of Paul dressed up as different film badasses wielding guns (which he decides is relevant enough to the tour to show you, every time.)

If this depiction is beginning to seem frightening, it’s only because you’re getting the right idea. The man can conceal a Saturday night special in his meaty palm, and he brandishes the tiny revolver with characteristic backcountry casualness. The particular aroma of his home is an acidic, paper-bleaching-chemical high note, over a droning midrange of dust, punctuated by low beats of congealed sausage gravy. You will not get used to it. Your only break from the smell will be the fifth leg of the tour, when Paul guides you out into his backyard, and leaves you to explore. It’s hardly a rest, however. Where the odor hasn’t followed you, the insanity has. His backyard’s done up as a jailhouse, complete with electric chair, mannequin prison guard, and gallows from which Paul threatens to hang L. Frank Baum’s munchkins—because, y’know, “Jailhouse Rock.”

This leg of the tour has been the source of a long debate among my friends. I believe that this brief break—this moment where you are left alone to stick your head above the waters, laugh, and take a photo in a model electric chair—proves that Paul is in some way self-aware of the insanity. If the tour was too frightening before, if Paul’s grip was too forceful in guiding your attention to specific Elvis artifacts, if he was too forward with his geezerly attempts to hit on the women in the group, the brief break provides enough distance to find the whole thing hilarious. I hope. “You look just like me ex-wife, and she made me come seven times a day,” was never aimed at me.

I’d have to lie to tell you everyone I’ve corralled into Graceland Too enjoyed the experience. At least one acquaintance attributes a Xanax prescription to her time in Paul’s house. “That was fun?” another demanded, bewildered on our ride home, “That was fun?” For me, it was fun, and it continues to be. But I’m a neophilic Southern male, comfortable with guns and tall tales, a member of the gender Paul doesn’t hit on. It has to be rougher for anyone paralyzed by firearms, panicked by catcalls, squirrelly about strangeness, or nauseated by an old man’s descriptions of sex. That said, the experience is unmissable if you’re happening by North Mississippi, if only for the sheer novelty.

Since I do want the largest range of people to visit Paul’s house, let me give a few tips which will allow you to fine-tune the terror of the trip. For the mildest experience: (1) Go in a large group, preferably with a Graceland Too veteran. (2) Smear Vick’s vapor rub on your upper lip to block out the smell. (3) Do not admit that any of your family is unmarried when he asks. (4) Decline to hear his stories about “the crazy shit that goes on around here” at the end of the tour. And (5) do not pursue any story of his which begins by him belittling a previous claim with, “And that’s just Mickey Mouse shit.”

However, if you’re a thrill seeker, eccentric, or a psychonaut caught in a drought, follow these instructions: (1) React with credulous surprise at everything Paul tells you. This evokes more of the “Mickey Mouse shit” anecdotes, which you will most definitely want to pursue. (2) Bring the man a Coke. He claims to drink a case a day, and that they make him horny enough to repopulate China “without the help of Jackie Chan.” (3) Ask why there are Diehard batteries in his backyard. (4) When he probes your group to determine if you can handle the graphic stories of what he claims happens late at night on his property, make sure you impress that nothing is off-limits for your gang. And (5) Live in his world, just for a bit. Believe his bullshit, and Elvis will reify like magic at Disney Land.

Paul makes many claims: that he owns the last footage of Elvis alive, that Montel Williams once came in and tried to kill him, that in that picture Paul’s pointing at right now, Elvis is having sex with four women at once, even though you can only see his face, and that Tom Cruise came in once with a dog standing on his head (this one happens to be true. I’ve seen the picture). But what’s absolutely true is that Graceland will charge you $31 for the tour, more for parking and never ever make you a member. However, if you go to Graceland Too, you’ll pay five dollars, and only ever three times, because after that you receive the coveted “Lifetime Member” card and will never have to pay another cent in your life to go to an insane man’s house in the middle of the night so that he can rant about Elvis and offer to “eat through your girlfriend’s panties to get to her slippery clit.”

Ben Ƶuerlein grew up in Little Rock, AR, where he fell in with hellions that he still holds dear and began codifying his lies into fiction. Now, he lives in Oxford, MS—specifically at Bottletree Bakery on Van Buren Avenue, Tuesday-Sunday, 9:40am to 1:15pm—where he practices yoga, drinks mid-shelf tequila, and edits papers for pretty girls.