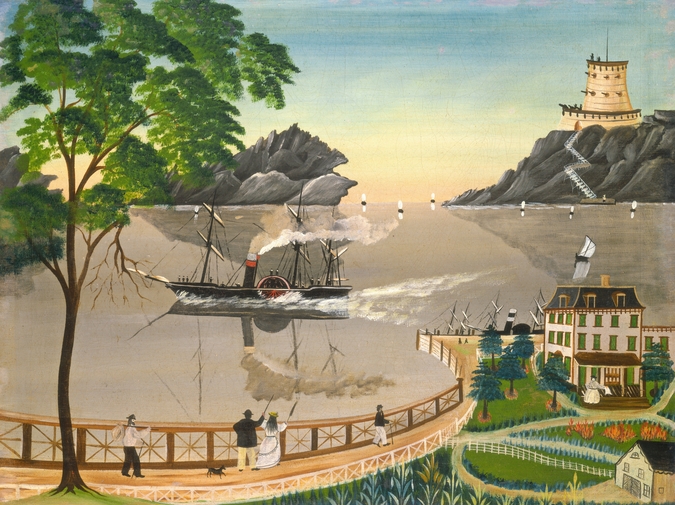 On our last outing I took my father to a small park on the Jersey side of the Hudson River. Macular degeneration had already eroded his vision, a blurring that revoked his license and declared him legally blind. Alzheimer’s had started to affect his memory and his gait but hadn’t yet robbed him of speech or made him paranoid, delusional, full of rage. It hadn’t yet interned him in the nursing home where he would die of neglect and COVID-19.

At the water’s edge, my father said he’d never been there before though it was only a ten-minute drive from his apartment. Maybe he had. He might have been there the day before. I guided him to the handrail along the water. A cool day in July. We looked across the river to Inwood Park on the northern tip of Manhattan and south to the George Washington Bridge spanning the Hudson. Everything was tinged with gray: city, river, sky. The bridge gray too, the rocks, the pavement, my father’s greasy hair and blue-gray eyes.

He talked about the river. “You used to be able to walk across it,” he said.

I chalked this miracle up to dementia but then he explained, tapping into some half-remembered material from his short-lived tenure as a history teacher, that he read in Hudson’s diary that there were so many fish in the explorer’s day that you could walk across the river on the backs of them. A river coursing with so much life it broke through the surface. I liked that. The life there, invisible but present, despite the pollution, the sewage; despite how dead still the water seemed.

My father watched the river while I watched him. He tired quickly so we returned to his apartment and sat together, huddled on the couch in the spare bedroom. It was part warehouse, housing boxes of antiques to be sold on eBay as part of my stepmother’s side hustle, and part crafts room. It had become my father’s favorite room. He woke in the night to rearrange it, taking down the wild fuchsia paintings done by my stepmother’s eccentric aunt, brash portraits of dancers and clowns that even I found unsettling. He wanted to hang his poster board in their place. He’d been making a collage of printouts of Grandma Moses scenes. Pictures of children ice skating, simple pastorals, bright and calming. The adult day care he’d been attending had brought out his crafty side. He stood, unsteadily shuffled over to his project, and proudly showed it to me. Then he perked up, grew animated, and said he called this “the room of golden light.”

“See,” he said, pointing at the window and the way the afternoon light poured in, enveloping the pell-mell antiques, the collage, the paintings on the floor, us.

I looked out the window at the parking lot he couldn’t see and the historic church beyond it, its bricks charred from a recent fire. Farther still, hidden from us both, the Hudson. I praised the light and his handiwork. We returned to the couch, father and son, and slumped into its musty cushions. He talked. I listened. The sun set.

On the two-year anniversary of his death, I wonder if this was enough. Brief moments, memories now, of life breaking through the confusion and fear and dissolution of dementia. If all I could do, if all any of us can do, is keep a person company in their little patch of brightness as their world shrinks, turns gray, and comes to an end.

Kent Kosack is a writer, editor, and educator based in Pittsburgh, PA. His work has been published in Tin House (Flash Fidelity), the Cincinnati Review, the Normal School, Hobart, and elsewhere. See more at: www.kentkosack.com