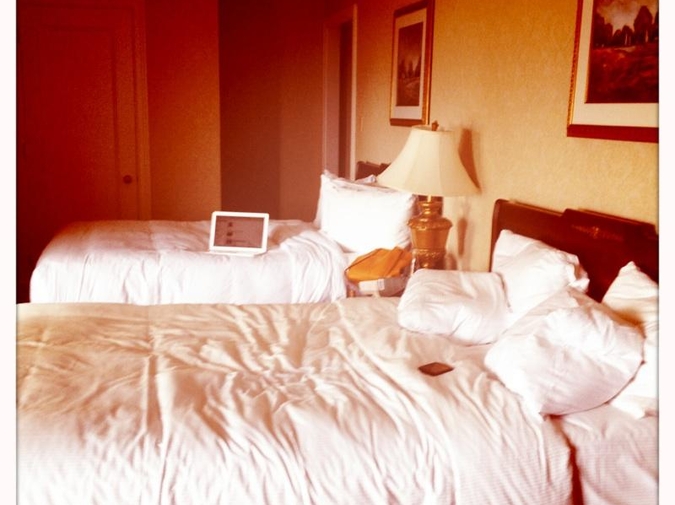 They must have been in Georgia already.  Mile-high pine trees loomed just above titanium light poles.  Rain was coming down at the car in a funny, sideways sheet.  Misting over the windshield.   The news was always saying they lived in a post-rain era, but that wasn’t true.  The sky still drizzled and spat at the world, it just never came down in buckets, with confidence.  They were in the clunker; the Chevy Malibu that belonged to Violet's Mom, which they had taken with them on this adventure.

Violet looked at her husband as he hunched over the steering wheel.  When she met Kurt he was one of those fumbling boys with shoulders too broad and legs too thick for the rest of his childlike physique.  He had a shock of loopy blond hair, and that—in addition to standing a good eight inches over the crowd at all times—differentiated him from the herd, and drew a person’s eyes upward to him, the skyscrapers, and the afternoon sun that rippled above his head.  From the first moment Violet saw Kurt standing on the corner of Mercer and East 4th Street handing out flyers for an Antediluvialist rally, she was literally looking up to him.

Kurt hadn’t driven since he got accepted to college and declared himself a New Yorker.  Now double-barreled oil trucks sped by them at ninety miles-an-hour while their Chevy was ticking along at fifty-five.  He was breathing deeply, his eyes fixed through the windshield.  The rain was beginning to separate into drops but the sun still shined through them.  Kurt turned the chugging vehicle into a highway gas station and pulled it halfway into a spot on the edge of the pavement.  He cut the engine and swung open his door, pitching his body out through the air until he hit the browned grass, smiling and shrieking.  He rolled all the way down the burnt grass parking lot hill.

He jumped to his feet and bounded over to Violet who was shoeless now, leaning against the passenger side of the car, puffing her black bangs and rolling her eyes.  He grabbed her and attempted to pick her up and press her whole body against the car, wrapping her two legs around him.  But he couldn’t do it.  He struggled for nearly a minute before his arms went limp and he headed to the gas pump.

Violet drove through the rain and thought about how things could get better.  Maybe they really would move down here, away from the North and all that came with it.  Kurt was already in charge of the college chapter of the Antediluvialists when she’d met him.  Of course there was technically no leader, but then, there was Kurt.  It was artless and easy; people wanted to listen to him.

She married Kurt just over a year ago, right after he’d graduated from college.  Antediluvialists preach the uselessness and petty bourgeois reasonableness of higher education, and so she had dropped out when Kurt graduated.  Violet’s mother had cried while Kurt’s mother framed the certificate he got from the President of the University that said his GPA was among the highest in school history.  On the night of his graduation Kurt had treated Violet to a candle-lit dinner on the rooftop of their collective house.  Stars hung low over the Brooklyn Bridge, twinkling above the cursive graffiti on the tops of buildings.  The graffiti read: You Go Girl!  And: I Still Love You.  Kurt told her he was proud of her for, “Doing what she did and getting free.”  She called him a cheese-puff.  A sweet-corny fritter.  It was a beautiful night.

Now Violet knew all of the spoken and unspoken tenets of the movement.  The way to be the perfect Antediluvialist wife is to learn to share.  Have your own bed in his house and when a new girl is traveling through: “Hello, my name is Potassium,” let her sleep in his bed and you go to yours, and never admit that it bothers you.  You are cooler than that.  Stay composed; you are a woman.  You want to do extraordinary things.  Like keep this guy.  Two weeks later Calcium comes to town and you’re on your own again, and you can hear them through the wall, pounding.  You put a pillow over your head and think about Antediluvialism.  No body is nobody’s private property.  Calcium giggles and whispers to him:  “Are you close?”  And you hear it.  You cry in front of him and he tells you that your face looks bloated when you’re sad.  He thought you were cooler than that.  A month passes and then Vitamin C sidles up beside him, and it occurs to you that he is a nourished man.

Kurt was wide awake and playing with the radio dial now.  He settled on a barely audible woman’s voice.  “Hurricane,” the voice was saying.  That was one of two words they could make out.  The other was: “Evacuate.”

It was four in the afternoon but most of the light had gone out of the sky.

“I think I want to stay in a regular hotel tonight,” Violet told Kurt.

“We can’t do that.”  Kurt said.  “We’re adventurers!  Antediluvialists!  If it wasn’t raining I’d make you sleep next to me right on the shoulder of the road over there.  And I’d make you do it naked!”

“We need to be inside, I don’t think that what happening outside is just a little storm”

“What are you, a bourgeois asshole?”  Kurt answered.

They were silent for the next hour and a half that it took them to get to Tallulah Gorge.

Inside their room at Butch’ Roadside Inn the television showed footage of New Orleans under water.  Levees had broken and the streets and cars were submerged.  People were riding through neighborhoods on motorboats.  Water had engulfed houses up to their second story windows and whole families were screaming at the news helicopters from their roofs.  Infants in diapers, grandmothers in robes; everyone was crying.  Kurt and Violet sat on the synthetic bedspread and watched the horrific images without a word. Outside their motel room rain was coming down artillery fire.  Sycamore trees were swaying in unreal movements, trunks bending at the waist, leaves and branches sweeping the ground, grasping.  A limb broke off at the shoulder and crashed against the highway pavement.

The boom of the crash made Kurt get up and push the door open.  He walked outside and stood on the green grass of the road bank.  Violet went to the open doorway and watched him.  He looked like a reed being blown back and forth, thin, with intermittent blond hair clumping upwards.  There was a sound, like a bird squawking rhythmically, mechanically.  It took her a moment to realize it was coming from Kurt.  Laughter?  And then he lowered his head and faced her:  tears.  He was sobbing, although there was a fixed tension in his face.  A smile. Rain ran down his cheeks, and his tears mixed into it.  He swung his arms around his body in a circle.

“The flood!”  He yelled to her.  “The flood!  It’s here.” His squawking sob was interrupted by victory yells now.

“The time is now Violet.  I’m going further south— this is it!  The revolution will begin!  The flood came back.  I’ve got to go down south and claim it.”

He ran to where she was standing in the doorway and put his arms on her shoulders.  “Are you coming with me?  Are you going to follow me down?”

He looked peculiar; this was not the same person she had met on Mercer and East 4th Street.  Kurt laughed and dropped his arms, stepping back into the rain.

He took another step backwards into the parking lot and looked up at the shadowy sky and then across the four lanes of empty roadway to a billboard swaying back and forth.

“I did this!”  He screamed a rebel yell.  His right hand beat his chest violently and then shot into the air.  “I did all of this!”  He laughed with his whole body and looked at Violet with yellow eyes, before turning and running down the highway.  She could only see him for a minute or two, a fuzzy grey figure moving away from the motel at a rabbit’s pace.  The last thing she heard from him, through the whirring and clattering noise all around her was his fervent, guttural cry: “I made it rain!”

Maura Roosevelt lives in Brooklyn, NY with a boyfriend and a bicycle.  She teaches essay writing to freshmen at NYU, and is at work on both a collection of linked stories and a novel.  She holds an MFA from NYU, where she was the recipient of a Starworks Fellowship.