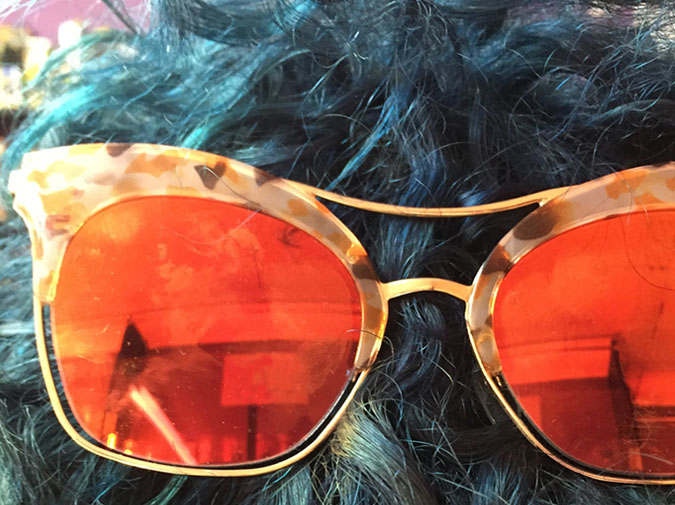 The story is usually backstabbing of some kind. Or one of us had to work hard all the way up and one of us was born into a dynasty, got everything handed to her. At the bell, we lock up, hands on shoulders. L has a move where she jumps up and hits the other girl with her ass. I am getting old and so I have less time in the ring. T was blonde but now has dark hair. T did a heel turn. You are either good or bad. We will all be bad at some point because goodness can only last so long. We have to work on our facial expressions. We have to learn how to look pretty while being mad or getting beaten. I worry about the shape of my body, and consider new gear. That’s real blood on T’s face. They say wrestling’s fake, and it is and it isn’t.

During an eighth grade graduation party for a popular girl where everyone was invited, as the DJ played a line-dancing pop song, Cat dared Dani to pierce her own bellybutton.

Dani took a safety pin that was keeping part of her jeans together and shoved it through the top of her navel. She stopped midway, as nervy pain spread like a hug around her midsection.

A boy walked by. “Sick,” he said, stopping, staring.

Dani didn’t know which kind he meant, good or bad.

Cat sat next to her, drinking orange Fanta. The boy lingered. Another came by, near him. “Don’t be a pussy,” Cat said to Dani. “Just push it through.”

Ok but see Wanda would’ve done it herself, like the actual deed, but in a sense wasn’t she kind of doing it herself by like, coming up with the whole plan, and making a phone call to Terry? Because it wouldn’t have even been a thing if she didn’t dial Terry, didn’t set the whole deal in motion. And Charlie Manson didn’t really do any of the dirty work if you wanna split hairs. And the real guilt would be saddled up tight to Wanda anyhow, not her ex-brother-in-law Terry, since Terry was a bad guy to begin with and she doubted bad guys like that felt even one ounce of guilt. Wanda was almost like a, well, a martyr. Because part of it, too, was she’d have to keep her mouth shut forever and not have Shanna ever find out about the thing her mama did in order for Shanna to get a spot on the cheerleading squad. And that thing stemmed from a tiny idea, a natural conclusion really, a simple matter-of-fact, which Wanda said out loud to herself, looked in the bathroom mirror and said, real low, Verna’s got to die.

Freshman year, they had an old guy who couldn’t hear as a sub in English. He told stories about his sad life and gave them word searches to do. Cat was bored so she took out her lighter and clicked it to make little sparks. There was a boy who sat in front of them, Charlie, who always asked Cat to go out. She liked to tease him then ignore him. Dani watched him turn around, drum his pen on the top of Cat’s desk. He moved it to Cat’s arm, dragged it slow. She eyed him, followed the pen.

Cat stopped flicking the lighter, smirked. “Get something sharp,” she said.

Dani took a pin from her book bag, a big Metallica one. It was her dad’s. She’d found it in a box of his stuff he’d never picked up from the house.

Cat lowered the lighter as the old sub told some kid a story about his dead son. He was military, but it wasn’t clear if that’s how he died. Cat clicked the lighter and the flame blacked the button’s pinback. She pulled Dani’s ear taut with her left hand. Dani felt the warmth of Cat’s fingers. The pin of the button wasn’t too sharp.

Eventually, Dani heard a pop. She felt Charlie’s eyes on her.

We are undergoing changes, the bosses say. We don’t hear any more about it for a week, so we fight as usual. T hurts her shoulder and her eye puffs up yellowy-brown. I’ve held three titles. Now I’m a jobber. I lose to make the rest of us look good. We pile into vans and one of us drives to the next show. Every day, there’s a show. Every day, they want me to lose. Losing still means people see me.  Sometimes you can’t tell if the boos mean you are good at being bad or you are just bad. We eat at chain restaurants, try to get sleep. L meets a waiter at IHOP. I started a long time ago, when I was fifteen. When you’re so young, everything you do amazes. Everything you do is a feat. We check into hotels. Sometimes I forget the name of the city we’re in.

“Oh,” Cat said. “I gotta show you something,” They were in Dani’s room watching talk shows on the floor. The carpet was dusty rose. It looked like a big tongue. Dani’s mom wasn’t home but she wasn’t ever home.

“K,” Dani said. Cat stood up, pulled off her t-shirt, then unclasped her bra.

Dani didn’t know where to look. She wondered who else Cat had shown. “The right one’s a little purple,” she said.

“Yeah, I did that one second.”

Cat inspected herself in the bedroom mirror. Dani realized she hadn’t ever seen Cat naked before, hadn’t ever thought she would. She couldn’t imagine showing anyone her own breasts like that, in Cat’s easy, comfortable way. She pulled her sleeves over her hands.

“I’m going over Charlie’s tonight,” Cat said as she put her shirt on.

All Wanda had in the world, besides what her daddy had called a wild streak, was her diamond earrings and Shanna. Wanda’s daddy said cheerleading wasn’t allowed and was stupid and worthless and a joke, and Wanda’s mother kept quiet and said nothing, and so Wanda always knew that when she had a daughter of her own –and she knew she’d have one, focused all her energy on making a girl when Shanna’s dad came inside her –she would be a cheerleader. And Wanda had put the idea in Shanna’s head from the time she was five.

But now, perfect little Amber kept on making the team, not Shanna. Wanda knew it had nothing to do with Verna being a good mom. She was pretty sure Verna’s garage wasn’t fitted with mirrors and cushy mats; that she hadn’t shelled out hundreds of dollars for gymnastics; that she didn’t make Amber practice hours every day, even when she was puking from some virus she caught at school. It didn’t add up. So she’d give Terry the diamond earrings and let him pawn them, and then the thing would happen, and then Amber would be so shattered she’d up and quit.

Cat bought a tattoo machine off the internet for $40. “I can do organic shapes,” she said. “Trees. Waves.”

“Too circular,” Cat said. She lifted her hair into a ponytail. Dani saw a few red and purple marks on her neck, little roundish blotches. Mouth-size.

“Surprise me,” she said.

They found new girls. The new girls don’t know how to wrestle but they know modeling. The roster fluctuates. X is retiring because she’s pregnant. We can come back after we give birth, but usually we retire. Usually our bodies are not the same. I decided not to have kids, and maybe now it’s too late. X is huge, everything about her soft and round. The new girls are small. The bosses tell me I need to teach them. The new girls are hesitant when I do a neckbreaker, when I do a Samoan Drop, when I come near them at all. If they are nervous, stiff, they could get hurt. I could get hurt. They don’t pay attention. But the bosses do. They come to check up. They sit on folding chairs and watch. I do a corkscrew moonsault, which I haven’t done in years, on a new girl, and she looks crumpled up. She starts crying. The bosses want to meet with me.

It was stupid fuckin’ Terry who told. He recorded it all, every word Wanda said to him. The cops came to get her when Shanna was in the garage, practicing a routine. Wanda stayed calm, never broke, told Shanna her grandma was coming to watch her, figured she would understand some day, maybe way way down the line when she had kids of her own. For the first time, she thought about the future. About how long fifteen years would be. But she supposed fifteen years wasn’t too bad, really. If Terry’d actually done it and then gone to the cops, it would’ve been different. She remembered some news show a couple years ago about a lady serial killer who got executed. Her last meal was cheez doodles and Coke. No, fifteen years wouldn’t be so bad.

At first it felt like a cross between tickling and scraping, but now, after an hour, maybe two –Dani had lost count –it felt like a white heat, like searing.

Dani’s leg felt bigger and bigger and red, she could feel the red. The blood, the swollen pinkness. The heat.

Cat held the machine, whirred it. “Does it hurt?”

Dani looked at the ceiling.

The white pain held everything. It rushed to her throat and sank into the roots of her teeth.

Jesus fucking Christ, of course, Dani wanted to say. She felt the heat in her face now, boiling out of her skin. She clenched her teeth. Of course. It always hurts.

Emily Costa teaches freshmen at Southern Connecticut State University, where she received her MFA in 2013. Her writing can be found in Barrelhouse, McSweeney's Internet Tendency, and Fiddleblack.