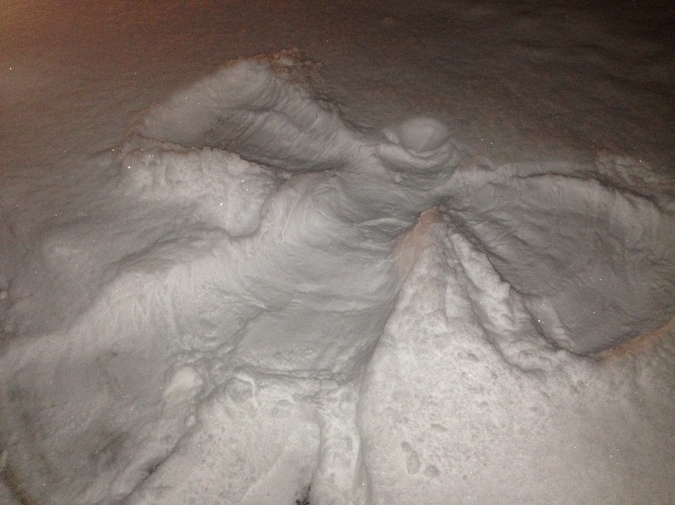 Leo and I are dicking around in his room after school when I pull this big cardboard box out of the closet.

—Is this every birthday card you’ve ever gotten?

Leo, as it turns out, has difficulty throwing away gifts. More accurately, he’s unable to do it on a pathological level. He explains this with a story about when he was eight years old and his aunt gave him a little wooden toad she brought back from her vacation to Peru. After disposing of the toad Leo was so overcome with guilt that he spent hours rooting through the trash, then the neighbors’ trash, and finally the town dump. He was found after thirty-eight hours and had to see a therapist three times a week for a couple years. The toad was never recovered, a fact that haunts him to this day.

—I can see it when I close my eyes, he tells me.

I am seriously weirded out but also kind of fascinated.

—So, do you really like getting presents? I ask him.

—Actually, I kind of dread it, he says. Leo has eight plastic tubs in the attic filled with every present he’s ever gotten. They take up a lot of space. His parents don’t say anything, but he can tell it bothers them. This, he clarifies, is not to say that he isn’t grateful for every gift he receives. He is incredibly grateful whenever anybody gives him anything. That’s why it’s so hard to throw any of it out.

—That’s kind of nice, though, I say. —Most people just take everything for granted, but you’re like the only person who realizes how lucky you are that you live this privileged life where everybody just gives you stuff at least twice a year.

—Yeah, I guess that’s a good way of looking at it, Leo says.

For Leo’s birthday, I give him a sock that my dog puked on. Leo picks it up between his thumb and index finger and studies it.

—It’s a sock that Russell puked on, I explain.

—Are you going to keep it?

Leo has placed the sock delicately on the corner of his desk. —Yeah, he says. —I think I have to. There’s a real good chance that I would literally go crazy if I tried to throw it out.

A few weeks later I give Leo another present. He peels off the wrapping paper methodically, without relish.

—Oh, look, Leo says. —It’s a… Yup, it’s a big stack of child pornography. And Chanukah isn’t even for another five months.

—I was just thinking about you, I say.

—This is obviously very illegal, Leo says. —And also thoroughly disgusting and morally reprehensible. It must not have been easy to find.

—You don’t even want to know, I tell him. —I had to go through a lot of very unsettling channels.

—In a way, I’m kind of touched, he continues in a surprisingly even voice. —It’s sort of amazing that you went into all of this effort to get me a stack of child pornography. I can feel waves of gratitude coursing through my body even though I don’t necessarily want them to. At the same time, though, I just hate you so much. This is such a terrible thing.

—It is some repulsive stuff, I agree. —You haven’t looked through it yet, but a lot of those kids are super young.

—Great. Thanks. I’m going to hide this in my parents’ attic now.

Leo starts avoiding me. We don’t have any classes together so I have to wait around and catch him as he’s leaving the locker room after cross-country practice.

—This is a present I got for you, I tell him.

—It was used in a murder.

Leo shoves the gun into his backpack. We stare at each other.

—Do I want to know what kind of murder? he asks.

—Drug related, I tell him. —Something to do with territory? I saw two guys throw it in the dumpster behind the Quiznos and I thought, you know who would love this murder gun? Leo.

—So, would it go against your mental code or whatever if you turned the gun over to the police? I ask him. —Would that be the same as throwing it away?

—It would sort of imply a lack of gratitude, though.

Leo tells me that he didn’t want to accept my visit, but he felt like he had to because it could be construed as a gift. He’s been denied bail and not a lot of people are visiting him since they all think he’s a murderous, drug-pushing pedophile. He’s about an inch away from losing it in this place and he’s almost certain that rejecting a gift would push him over the edge. So, he continues, even though he would like nothing more than to subject me to every monstrous act that he’s been accused of, he’s here anyway, behind this bullet-proof glass, talking to me on this stupid telephone. Because, in some way that he can’t understand or explain, my presence feels like a gift.

—You’re welcome, I tell him.

Leo breaks down and starts sobbing.

—Why did you do it? he asks. —The child pornography, and the gun, and all the Nazi paraphernalia, and the kilo of uncut cocaine, and the fingernails of those girls that went missing, and that disgusting, disgusting sock. And then, to top it all off, you anonymously tip off the cops about my parents’ attic. What was in it for you?

—I don’t know, I say. —I guess I saw your relentless gratitude as this pristine, beautiful thing and I just wanted to destroy it.

—But you haven’t, Leo says. —I’m still grateful for everything I’ve ever been given.

—Whatever, I tell him. —This isn’t that big of a deal for me.

I’m the only one who shows up to see them execute Leo. Even his parents stay away. As soon as they’ve taken the needle out of his arm the warden asks him if he has any last words. His face muscles are already starting to seize up.

—Screw you, Leo says hoarsely, craning his neck in the direction of the one-way glass. —I know you’re out there, you fucking asshole. You didn’t win. You didn’t defeat me. Thanks, guys, for the poison. I really appreciate it.

—Jeez, the observation room guard says to me. —I know that guy was a piece of work, but I didn’t expect him to be all sarcastic, too.

Jeremiah Budin is an editor at Curbed NY, a blog about real estate that's more fun than it sounds. His work has appeared in The Higgs Weldon and The Bygone Bureau. He lives in Brooklyn, New York.