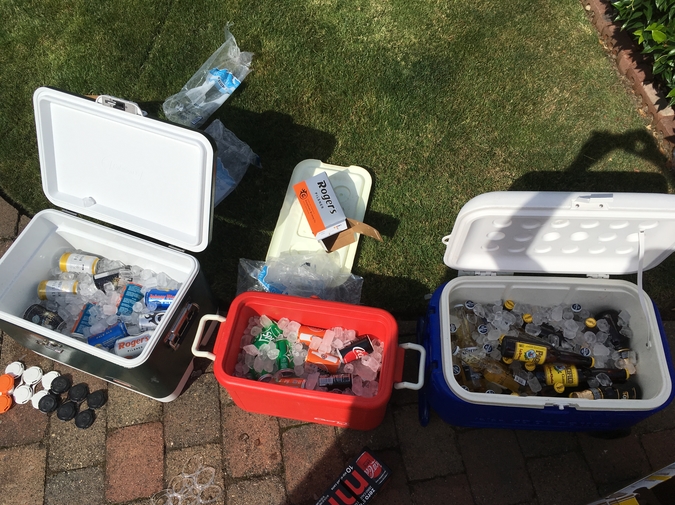 We lingered in the yard, each holding our beers, trying to look as if we hadn’t forgotten one another. Brian said he was adjuncting, a few places. He said it was a bit of a commute, Palo Alto, San Francisco, but it was worth it. As it turned out, that was my story too, elsewhere. He shifted his weight from his left foot to his right. It was weird seeing him without a hair wrap, without roller blades, his uniform in college, weird seeing him instead in a pastel button-up. It was late spring or early summer, warm in that way of bursting. I looked at him and then at the palms, always the palms, their fronds ready to drop. Everyone knew someone who knew someone with a shattered windshield, a cousin’s cousin crushed just as they had begun to turn their life around. I said the adjunct game was no good, but that you had to accept it for what it was. I said I liked teaching. I liked my students. I told him I forced my composition classes to write about ghosts, to write what haunted them. He was from the northside of Chicago and had, seemingly, lived these whole other lives, but I knew him first as someone who rolled through your open dorm room doorway at two in the morning, talking Nietzschean eternal recurrence and, later, with his sledgehammer, his rage, insatiable, suburban life bottled and shaken, frustration bursting across a rusting sedan frame, a cactus shrub reduced to pulp. I wanted to ask why he was so angry, how it was he had ever made me so angry. I wanted to ask where he got his sledgehammer, but it was as if I both knew and had no interest in hearing the answers. What I wanted was to study his reaction as I did the asking. He said he’d had a few Skype interviews, but no campus visits. Philosophy grad school I could picture only as hapless spit-talking, fisted assertions about Whitehead, about Spinoza, about aboutness. And he must’ve thought the same of an MFA. I asked about publishing, and noticed that the others had drifted elsewhere in the yard, us over here, them over there. We were in town for a funeral and that had happened and now this was the reception. I shifted my weight from my right foot to the left, sipped. He looked down at his beer and then back up at me. The breeze was thick with smog like you might chew it, but warm, warm like you ought to take off your shirt and lay in the grass, a ladybug crawling across your face. I wondered if he too wanted to lay in the grass. Once we had wandered through a dry riverbed we called The Wash, smashing yucca, pinto gneiss, etc., meaningless debris, forms and un-forms, new forms, sweating in the heat. And now, if we so pleased, we might stroll a few yards and find ourselves in the cement trough of the L.A. River. I found myself telling Brian that before they poured concrete the river migrated seasonally, that twice downtown Los Angeles had been washed away and rebuilt. He said, What? I said I wondered where those downtowns had been. He looked at his shoes, said, Is there water in the L.A. River? I hated white wine but talking to Brian made me want it bad. I almost said, Somewhere an adjunct is being crushed by a palm frond. I said, Excuse me, and drifted toward a folding table spread with beverages, carrot sticks, chunked melon. I was going to drink white wine, cheap shit, lurking on ice in a blue cooler. I was going to place snacks on a plastic plate, my motion toward the table implying infinite futures, infinite worlds, and  yet all the while I had the strange sense that somehow all of this had happened before, that whether I got in my old Accord, long since totalled, junked, and drove home to the mother-in-law studio I’d once rented in Pasadena, or drove to the beach in Playa Del Rey, where the passenger jets skimmed gracelessly above on their way in and out of LAX, whether I took the Expo Line to Union Station and its grand atrium, permanently scented Wetzel’s Pretzels pizza dog, or the Gold Line in the brilliant light of the Arroyo Seco, the Red Line deep underground, where the unthinkable could happen, happened, where I’d seen fist fights and, once, an eyeball dangling by the optic nerve, where mostly it was a calm and piss-stained place to stay warm, or cool, if you had nowhere else to go, gliding from downtown to North Hollywood and back again, again, again, suspended, invisible to the grid above, that whether I became somehow tenured, whether I didn’t get classes next semester, whether I was waiting tables at an outdoor patio in the shade of unsteady palms, whether I was still puttering in the muck in north Seattle, among the Evergreens, unsure how long it’d been since my mom said, Be home soon, it made no difference, because my actions weren’t quite my own, it wasn’t exactly my own life I was leading. I returned to Brian, fresh drink, fresh plate, my whole life ahead of me, and he said, Do you believe in ghosts?

Matt Greene holds an MFA from Eastern Washington University and teaches writing in Appalachia. "Ghosts" is part of a linked series of short prose pieces, some of which have appeared in, or are forthcoming from, Arts & Letters, The Cincinnati Review, Split Lip, Spillway, Wigleaf, and other journals.