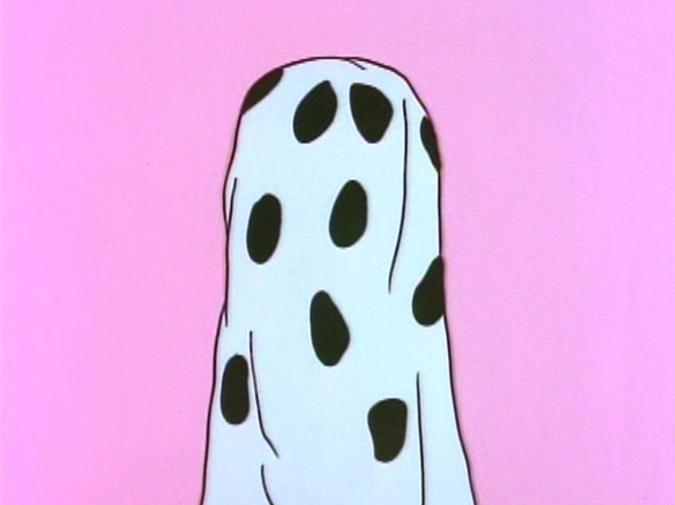 Two days before Halloween I caught my wife having sex with my best friend Dave in a position we’d never tried in seven years of marriage. She had a good explanation—she didn’t love me anymore. I couldn’t decide whether to kill him or her or both of them or whether to become a Buddhist and sit around all day, contemplating the sick Mystery at the heart of the world.

With my destiny up in the air and so much on the line, I decided to lubricate my brainstem at Kiki’s Tavern. I started with whiskey, then tequila, then somebody named Larry asked if I’d ever smoked Hawaiian Delight and I said Hawaiian what? and then I was sitting on his futon watching Fast & Furious 6 with a fluttery heart and a hand full of tortilla chips.

The sun rose and set and rose again and I threw up in an alley and prayed to Jesus for help and looked up and realized I was standing in front of Kiki’s again, so I went inside and ordered a drink.

Was it Tuesday? Was it Wednesday? Was my liver still processing the poison I insisted on soaking it with, the poor pink thing, scrunched in there between my stomach and lungs?

I hoped so. I finished my drink and ordered another.

Marla—that was the bartender’s name—didn’t measure when she poured. She raised her hand high in the air and counted: one one-thousand two one-thousand three. Somewhere around six there was a pint glass in front of me full of bright golden liquid.

“You wouldn’t know what to do with me.”

My God, that explained so much. Like why Marla was wearing a naughty nurse costume and why there was a giant spider hanging from the ceiling, staring at me with glowing green eyes.

I paid my tab and stumbled outside. The world was even scarier than usual. Cars flew by at 50 miles an hour with children in the backseat dressed as Care Bears and superheroes. Their faces were twisted into diabolical shapes by all the sugar they’d consumed. They pointed their fingers at me and screamed, “Look at the scary man!”

I looked down. I was wearing a suit and tie and seemed to have a puke stain on my oxford shirt. My hands fluttered like hummingbirds. I was a monster!

I tried to hail a cab, but I lived in Portland, Oregon. Hardly anybody owned a car. It was just people on bicycles offering to give me a ride on their handlebars.

A guy named Gene pulled over. He had a fancy mustache and called his bike “Fixie” and said I needed to hold on tight or I’d probably die.

“Where are you going?” he asked.

“Where are you going?” I asked.

“Beautiful,” I said, and we were on our way.

Everyone was ten years younger than me and wore costumes they’d spent their life savings on, which wasn’t much. Here was Marilyn Monroe arm-in-arm with Abraham Lincoln, who for some reason was covered in blood. Here was a vampire with tattoos and here was a character from a Wes Anderson movie and here was my one true love who I’d marry one day and have a thousand babies with. No wait—it was just some hipster dressed as Julie Andrews from The Sound of Music. I winked at her and she put her finger in her mouth and pretended to vomit.

We were off to a bad start.

I said I had to go to the bathroom, but really I just sat on the toilet and cried. I was forty years old. Who would ever love me?

Somebody knocked on the door. I opened it. It was Abraham Lincoln.

“Where’s your costume?” he asked.

“I didn’t know it was Halloween,” I said. “I’ve been drinking since Monday.”

He pulled out his penis and pissed in the sink. It was the least presidential thing I’d ever seen.

When he was done, he said, “Okay. Let’s get you a costume.” He led me down a hallway to a bedroom and proceeded to pull everything out of the closet. He found a dress and held it up to my chest.

“I don’t want to talk about wives.”

He shrugged and started pulling drawers out of the dresser.

He flopped on the bed and his top hat fell off and he asked if I wanted to snort some cocaine.

This seemed like the kind of thing that could ruin a political career, but I said, “Okay.”

He asked if I was game for something kinky.

He got on top of me and took off my shirt and dumped some cocaine on my stomach and snorted it off through a short glass straw.

I told him I’d never done anything like this before. He said, bellies are for pros, and cut me a line on the bedside table. I snorted it and watched a thousand white butterflies migrate across a memory from my childhood.

I knew where this was going. I was in a Civil War version of Brokeback Mountain.

I told him I wasn’t into that kind of thing. Not even with a president.

“I’m feeling really weird right now,” I said. “Is my face on fire?”

He said no, and offered to get me some ice.

I was so touched by his concern that I almost let him do whatever weird kinky thing he was thinking of doing a minute ago when I was feeling bashful and homophobic.

I was about to tell him I might be game after all when he said, “What about a ghost?”

He disappeared and reappeared with a pair of scissors. He pulled the sheet off Wilma’s bed and cut two eyeholes.

“Does Wilma know you’re doing this?” I asked.

The eyeholes were jagged, but Abe was satisfied. He helped me put on the costume.

I held out my arms and said OOOOOOOhhhhhhhh! and chased Abraham Lincoln back into the party.

Under Wilma’s sheets, it was about a thousand degrees, but it was fun. People treated me different now that I had a costume. An African American man dressed as a Pokémon character said, “Ghosty Ghost!” and gave me a high-five. A girl in fishnet stockings and a maid’s costume said, “Oh my God dead people are so fucking hot.” A guy in a purple suit who might have been Austin Powers asked if I wanted to dance, and I said sure, but I said it like, SUUUUUUURRRRRE! because I was a ghost.

A techno song came on and I moved my arms like a robot. Austin Powers spun me around and bent me over and slapped my ass. The entire party howled and said, “Check it out! Austin Powers is up in that ghost’s shit!”

The song ended and it was 2000 degrees under the sheet, but Julie Andrews walked up and looked at me in a sensuous way that suggested she didn’t know I was the same guy she’d just made a barfing face at ten minutes ago.

She grabbed my ghost hands and spun me around and looked like she was about to break into “My Favorite Things,” but then “Royals” by Lorde came on and I pumped my ghost fists in the air and Julie Andrews started twerking and I wondered if I’d ever been this happy.

Wait—of course I hadn’t. I’d been miserable for seven years! It all made sense now. I just wish I had a time machine. Fuck! Seven years.

Because I’d walked out the sliding glass door and was sitting in Wilma’s lawn, pulling tufts of grass out of the ground, crying.

“No you didn’t!” She seemed pissed. She was standing above me and had her foot on my sheet. She pushed me and I popped out the other side. It was like I’d just been born. I was a baby, high on cocaine, rolling around in somebody’s yard.

I tried to pull the sheet back over my head, but Julie Andrews wouldn’t let me.

She crawled on top of me and sat on my stomach and leaned in close.

“What are you talking about?” I asked.

There was a crowd. Everybody was on the porch drinking Pabst blue ribbon. The Milky Way was above us, which was the universe. Oh shit—the Universe! It was so pretty. It was purple like Orion knocked over the Kool-Aid. It was full of stars. I tried to count them, but I lost track.

“What are you doing?” asked Julie Andrews.

She lay down beside me and started counting too, but we were terrible astronomers. I couldn’t remember what number came after eleven. Julie got the hiccups.

In a better world, a dark love would have bloomed between us right there on the lawn, gazing up at all those massive infernos belching their immensity into the infinite nothingness. But in this world, Julie’s boyfriend showed up dressed as David Bowie from Aladdin Sane.

He was good looking.

Christ, he was beautiful!

I hated him for about six minutes until he offered me a cigarette and asked what my named was.

“That name rules,” he said.

We smoked and talked about his discography. We both agreed that Ziggy Stardust was his best album, but that Station to Station was vastly underappreciated. Julie went to find another drink.

David Bowie looked around at all the young people and made a face like he was going to cry.

“No,” he said. “Me and Alison are moving to Tucson. My dad has cancer. We’re going to take care of him. Man, I’m scared. I fucking hate Tucson. I kind of hate my dad too, but it feels like the right thing to do.”

I took a drag and looked at the lightning bolt on his face and said, “You’re a good person.”

Julie Andrews came back. He put his arm around her. They were so in love I could already imagine their babies—blonde elves with mismatched eyes singing “Edelweiss” in white lederhosen. They started kissing and David put his hand up her frock, and I realized they were about to conceive one of those babies right now, in front of me.

I didn’t want any part of it. I wished them good luck in Arizona and said it was time for me to go.

I stumbled outside and spent half an hour looking for my car before I realized the last time I’d seen it was 48 hours ago in the seedy depths of an alcohol binge. I thought about catching a ride on somebody’s handlebars, but I didn’t live anywhere. There was Kiki’s, but they were closed. There was Larry’s, but I seemed to remember him accusing me of being a rotten piece of shit after I ate all his pizza and beat him at Madden NFL 15.

I was moseying around, on the lookout for a vacant and somewhat clean dumpster, when I saw them—a gang of zombies with gashes in their skulls, splattered with their own brains. They were headed straight for me, staggering because they’d been up all night drinking or because they were dead.

I didn’t ask if I could join them. I just got swallowed up in their dark reality. My gait became slow and irregular, and I shuffled along with them—decaying, dropping limbs, looking for someone living to devour.

Were we haunting the world? Was the world haunting us? Would I ever be loved by someone who hadn’t abolished slavery?

Tomorrow would be all about answering questions, but tonight, for these last few hours of darkness, I stuck my arms out and moaned.

Kevin Maloney is a writer living in Portland, Oregon. His stories have appeared or are forthcoming in PANK, Monkeybicycle, and the Lazy Fascist Review. Find more at kevinmaloney.net.