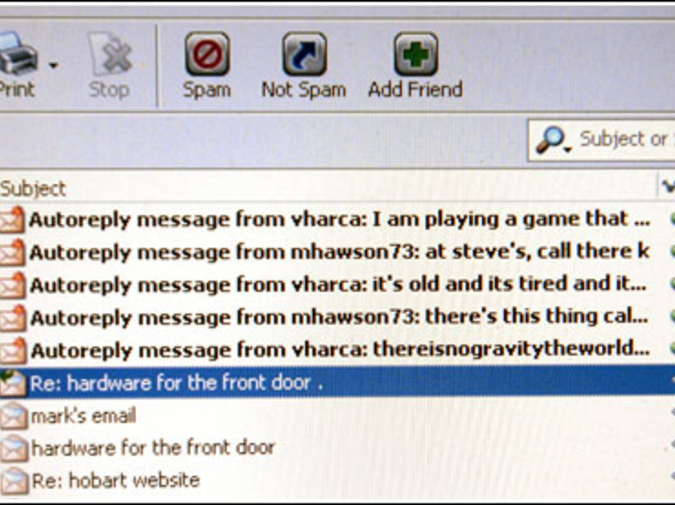 Deirdre doesn't talk to Nicole anymore, but she thinks she does. Last winter, six months went by with neither one of them saying anything. Right around Memorial Day, Deirdre asked if she could borrow Nicole's menu from the deli. Nicole was so surprised that she didn't say anything at first, and Deirdre mistook that for Nicole not hearing her. And she asked again. Nicole wanted to say "I've been fine, how are you?" But instead she just gave Deirdre the menu. And Deirdre mistook that as forgiveness.

Since then it's become a once a week obligation. Almost like clockwork, and generally completed before noon on Monday. Deirdre will ask to borrow something, she'll complain about someone, she'll scramble to come up with something to say to Nicole -- no matter how stupid. Out of the corner of her eye, Nicole sees Deirdre looking at her. Deirdre will shift her shoulders a little, bend her neck back and forth chasing an elusive twinge. Nicole knows that Deirdre is winding up for the weekly pitch, practicing the line in her mind.

When Nicole sees that Deirdre is about to ask her for a tissue or if she saw something on television the night before or if she has the file for a particular project, Nicole picks up the phone. She hits the release button and dials into a black hole. Nicole chats with an imaginary friend in much the same way that she and Deirdre used to talk -- amused, conspiratorial. Nicole keeps the conversation going until she sees that Deirdre is back down to square one.

Lately, though, the imaginary friends in the black hole have been talking back. "You realize," one of them said a couple of days ago, "if Deirdre thinks she only has to talk to you once a week, that makes you a church."

"You flatter me," Nicole said into the silence.

"I didn't say you were God, did I? You're just church. What you should be doing is asking her for ten percent of her income so that you can remodel your wardrobe."

"I'm thinking sometime in February," Oscar said one night at the diner. "Valentine's Day doesn't have to be a problem. If you're in a good relationship, it won't be. But there needs to be a day where we can all just go around and tell each other all the things we've been saving up the rest of the year. And ask questions, too."

Oscar nodded and wiped his mouth with his napkin. "Or even just, you are stupid to lease a car when your commute is fifty miles a day and your job is at a fabric store."

"You'd HAVE to make it a federal holiday, though." Sandra ripped two packets and poured them into her glass. "I'd keep a list all year, just for that day. And I bet a lot of other people would, too."

"That's an industry, right there." Oscar said. "Every December, people buy calendars. Every February, they'd buy something to keep track for Honesty Day."

"Notebooks," Sandra smiled to herself as she swirled her straw through her iced tea. "Big, fat notebooks."

I drove you back to Albion because that's where you'd left your car and we both got tired of waiting for Michelle to finish up the whole bonking Brandon thing. It was five in the morning and the sun was already shining enough for us to wear our sunglasses. We were the only ones awake in the world and I almost drove off the road a couple of times not because I was hung over (which I was) but because we were laughing so hard. It never occurred to me to pull over. I kept driving because it was the right thing to do in the right moment with the right person. It was time that neither of us wanted to end. By the time we got to Albion the eighteen wheelers were awake and we could smell coffee brewing in the gas station. I pulled into the space next to your car and said, well, see you on Monday. Our cars left the lot together with you behind me. Even though you had your sunglasses and I was only glancing up at the rearview behind mine, I knew that talking to me was one thing and looking at me was another entirely. So along with everything else, I've hated you ever since.

Erin Fitzgerald's work has previously appeared in Jigsaw Nation: Science Fiction Stories of Secession. She lives in western Connecticut, and writes a litblog for dilettantes at rarelylikable.com.