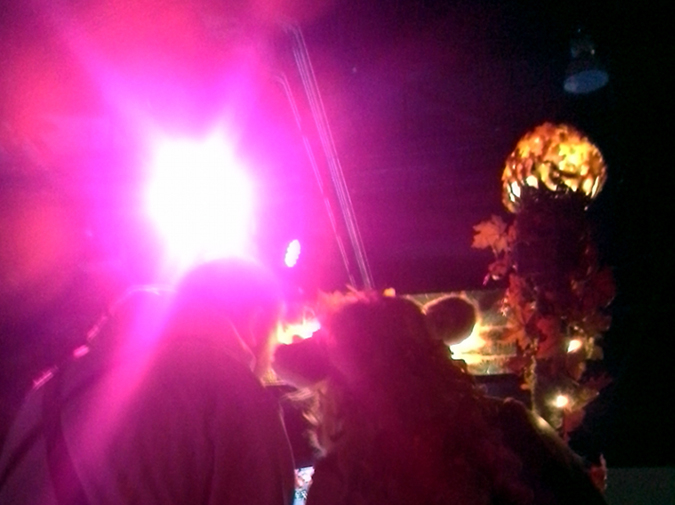 The watch tower, the water. The man about to leap. I know a story or two about survival. City, you and I burn hours like animal fat. We fill our pillowcases with glass and laugh as if our teeth have more than one purpose. City, we needed each other—you were my rock bottom, I was your now float on up darlin’. Remember when the streetlamps decided they weren’t having anymore of this shit and staged a walkout? The only light left was that blue flame you keep spinning near your sternum. Remember when every stray dog was a love story and the snow that night cleared the crust that had gummed my eyes shut? No, me neither, but fuck it. Let’s get lit one last time. Give me a reason, not a lover or a father or an unborn son. Give me the devil as he actually is—yawning, peddling patience. Glancing at me as if I were a rearview mirror during a desert drive. Expecting nothing, seeing nothing.


Before I Learned to Cook

She and I are in my kitchen. She is naked except for her underwear. We’ve just eaten dinner. She made pasta with Kraft parmesan, margarine, garlic salt, and pepper. Butter noodles, she calls them. At this point in our lives, it is one of the only meals we know how to prepare. She is naked but this is not a sexual moment. Our fucking still mostly consists of in denial rubbing beneath blankets. She stands in my kitchen under fluorescent light with her arms at her sides and at that moment she trusts me more than any person ever has. She shows me the scars from the reduction mammaplasty she had in highschool. She explains how, before the surgery, her Algebra teacher used to lean over her desk and try to see down her shirt. It might also be the night that she tells me about the youth pastor and what he forced her to do. She asks me what I think of her body, if she should lose weight. I say that her body has always looked to me exactly how it should. It's you. It is one moment in which I do not fail her, out of so many to come when I will. For now, we’re in a kitchen with blue tiles. No one is asking us to explain ourselves. It is snowing outside, the cornfields sleep. We are almost women. Our bellies are full and soft. I am just about to make her laugh.

my father knew a guy
with an inground pool the walls
and bottom of which were painted midnight
blue summers he took us there
so we could learn to tire our own bodies
while he popped open silver cans
and laughed from cement sidelines
until the year he receded like a rearview town
that shrinks and shrinks until
it is nothing but a speck I never felt okay
I couldn’t see the floor couldn't see
myself how far down his death
two decades later would be how bottomless
the loss it felt like I was diving
into an inky lagoon or a black hole
the years that would darken between us
like a blotted out moon or his mother’s eyes
swollen shut after I sat on the hardwood
floor of my apartment reading these cards
he sent that I never responded to Would love
to talk with you, call me sometime look at me
now strong swimmer laughing
at the men on the sidelines that summer
he was always there smiling
at me but his gaze was just over my right
shoulder sizing up the escape route
that would end in a 100 pound body
jaundiced lymph node-rotted
pinholed pupils fluid-filled abdomen how hard
it is to recognize someone
even when you think you have them

In her vegetable garden, my mother grew more tomatoes than we or our neighbors could eat, so they rotted on the vine, softened baby heads in the sun. My sisters and I hid under the benches of a gazebo my father built for her. We watched them. They were growing and building a home. Soon he would pin her to a red chair and then disappear in a mantle of moths. I would start stealing twenties from my grandmother's purse, and the boys at the bus stop would throw larger and large rocks at my little sister's head.

But before all that, my parents bought us a baby goat, white as a dream, almost an offering. We called her Lacy and chained her to an apple tree near the gazebo. Whenever I touched her, she butted her head against my waist, gently at first but more aggressive as the summer wore on. I still remember the brutal rhythm of it. By fall she’d stripped the tree of all of its bark. We watched it die. We watched my mother trapped in the chair. We watched her scream on the end of her chain.

Caitlin Scarano is a poet in the University of Wisconsin-Milwaukee PhD creative writing program. Her poem "Mule" was selected for the Best New Poets 2016 anthology. She has two poetry chapbooks: The White Dog Year (dancing girl press, 2015) and The Salt and Shadow Coiled (Zoo Cake Press, 2015). Her recent work can be found in Granta, Crazyhorse, and Ninth Letter. Her debut collection of poems, Do Not Bring Him Water, will be released in Fall 2017 by Write Bloody Publishing.