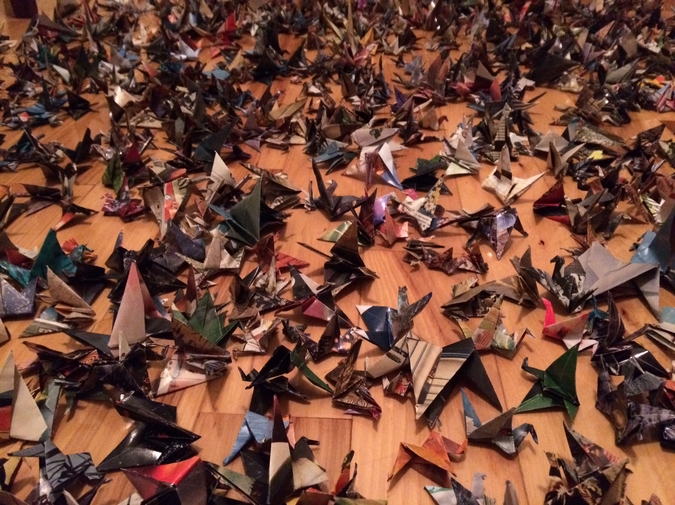 Neptune, for example, exists and it’s out there right now
all wind and rain, the kind that smells like diamonds.

Is there such a thing as a good day? We are blood and dust,
a full spectrum of want and mechanical parts. We dance.

We read Sky Mall. We make machines that keep the time
of racing cars. The future still hasn’t moved but there’s

a shining fish on the wall singing about happiness,
about the wild weather on other planets. And, of course,

there are the stories we tell ourselves in the dark
on the walk back to the houses we live in. Of course.

If You Find This

In August I never once wrote our names in the sand. Instead, we swam beside one another and felt the weight of the waves breaking over our heads. Even now I can see how far we’ve drifted from the shore. How much you’ve learned since I last quizzed you on words that translate to shoes and time and umbrella. It’s almost December and we’re just figuring out how to leave traces. Last week at the bar we took a page from a notebook and the two of us took turns drawing pictures of birds and bears. We connected them together with thought bubbles. A bear thinking about a bear thinking about a bird. I wrote my initials beneath what we made and slid it across the table. You wrote your letters next to mine. You set it between our empty glasses for someone else to find. On our way home we walked down the empty road calling Hello, anybody? Can anybody hear us? Where are you? It’s still only a matter of time before somebody takes a picture of us sitting next to each other in a crowded room. Of us, standing in the kitchen, coming up with a translation for the phrase Sooner or later the lake will freeze just like everything else.

The new idea is to press flowers
between the pages of books.

who may or may not get it.

It’s July now and there’s no breeze.
When a branch snaps I hear it and turn
to catch a man falling from a tree

landing on his back. I think,
I’ll never be the first to say anything.

A poet I know told me I have a voice
and I nodded. He said if you’re stuck

start at what-if and go from there.

It takes three to four weeks for a flower
to dry out flat without fading. It takes

three to four days for my notes to reach
Wyoming. All along, the branches

keep breaking and so do the little birds

in my head. When the heat goes
completely still I finally break
and start at the only place I can—

with the man on the ground

to stand up on his own.

And all at once you’re riding in a car. You’re not alone, you’re picking blueberries. You’re talking with somebody about writing letters. A friend is falling from a tree. Another one found a job. Even though you never saw the waxwing flying into the leaves, somebody tried to point it out to you and the two of you looked up in the same direction. What if you spent a morning pulling scallions from the soil and washing beets in a metal sink? What if you smoked a cigarette on the torn road after the construction workers left for the night? What if you learned a new chord tonight or wrote down one thing you know about birds on a blank sheet of paper? And what if you kept pressing. What if the fear of storytelling you’ve developed stopped with one bird. Then another. What if the flock you wrote gathered up into a song that quavered then grew thicker and thicker until it swallowed the sound of your own breathing and made a makeshift home of your mouth?

Carly Schweppe recently graduated from Hope College. Currently, she lives in Grand Rapids, Michigan and is an assistant editor at Vinyl.