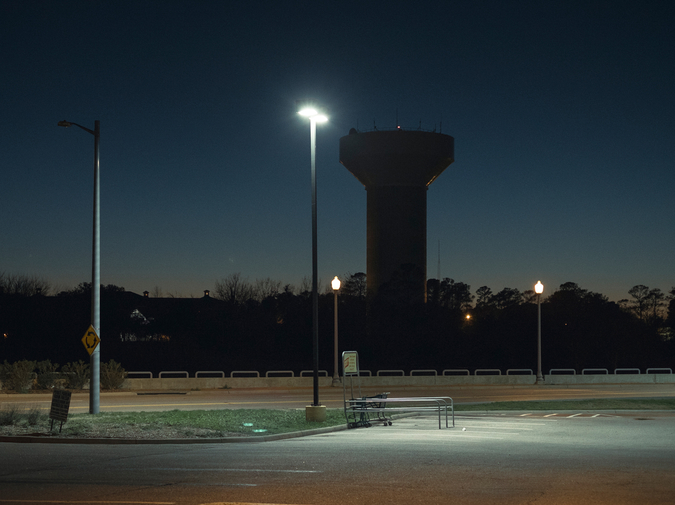 The radio tower had big cones on top. We were in the car and I said to mom, “What are those?” She didn't know so she said, “Oh, that's where Mickey Mouse lives.” I was shocked.

“Mickey Mouse lives here in our town? He lives up there on that tower?”

She looked over at me, cigarette in hand while driving ahead. “Yeah that’s what I said.”

Later I told my brother and he told grandma, and grandma said, “Aw that's so sweet that you believe that—”

Grandma looked at me, didn’t bat an eye, “Of course he does.”

We drove past that radio tower almost once a day. A lot of the times I looked up at it and gave a little wave at Mickey Mouse's real house. Celebrities have their real house that not everybody knows about. A secret. Can you keep a secret?

At night, lying in the darkness, I would tell my brother that we had to find a way to escape mom and dad, to climb the radio tower. No matter the danger. We had to bust into that cone. Inside was golden light and our personal God. We had to find a way to bust into Mickey Mouse’s house to see him. My brother hung his head over the side of the bunkbed and said, “We should kill him.”

I laughed. I said, “Maybe we should just leave him alone.”

My brother said, “Sounds good.” We went to sleep.

Many years went by, and one day I looked up and the cones were demolished. And I looked up again, and the radio tower was gone too. Bye-bye. By then I didn't care about Mickey Mouse. He’d gone psychically bankrupt. No one cared. He’d lost his home. He’d committed tax fraud. Gone to prison. Been evicted to who cares hell. A scandal in the paper. Gone forever. Erased from our consciousness. Gone from dreams. Gone from even waking thoughts. That power, that signal, that belief—caught on the wind and pulled away, out over the blue sea reflecting the blue sky, reflecting the blue sea. “Yeah that’s what I said.”

There was a concrete block garage on the side of our yellow house. Dad fixed broken things there. Cars, motorcycles, lawn mowers, whatever worthless thing he could make wanted again. He had a midnight blue Mustang hatchback parked inside, while he scouted the junkyard parts to make the engine growl again.

My brother and I were playing on the side of the house and here came the man, big and beefy. He had on a backwards trucker hat, and a sweatshirt covered in honest grime. I used to think he looked like a Viking with his red beard and his walnuts for knuckles, and oh god, what now? “Hey! You two birds! Come with me.” His voice was deep, was angry. We dropped our toys in the dirt. “Let’s go.”

We walked around the side of the rented house—we called it the Blueberry House because there were wild blueberry bushes down the side of the road, feed some to the dog first to make sure they still aren’t poisonous.

Following the old man, we crossed the dirt lot that was our yard. You knew you were in trouble when his voice got deep like that. He wasn’t what you would call a communicator, we had no guess what we were busted for. Our favorite thing to do when we were that age was to try to get him to do the Mickey Mouse impersonation. That high voice. Ah! ha ha! That kind of fun was the last thing on our minds right now.

The door to the garage was open. It was cold out, the kerosene heater was going. It was warm in the garage. I liked the way it smelled—fuel and grease. A pleasant reek. He opened the back door of the Mustang and pointed inside. “Who did it?”

“Yeah, did what?” my brother said. We were stumped. He had us both climb in the back of the car. He opened the front door and climbed in the front passenger seat and faced backwards at us like we were in the back of a squad car. He said, “Who did that?” Now he pointed those big giant fingers up at the ceiling over my brother’s head.

There was a hole in the headliner. Size of a kid’s thumb. “Tell me who did it, don’t look so innocent.”

We’d never been properly beaten like some kids we knew, but we were always sure this would be the time that we really did get our asses kicked. Every once in a while mom would get mad enough to hit us with a wooden spoon, ‘Thee Wooden Spoon’, but it didn’t really hurt, and we were so sorry! We’ve learned our lesson! We’ll never do something that bad ever again. We were amazing. Baby Marlon Brandy. Baby Paul Newman.

Just a few months earlier while waiting for dad to get out of work, sitting in his car 2pm to 3:30pm, we kicked out one of his speakers. We’d been in the back of the Mustang, with the seat down, playing with our action figures and fighting, and in our wrestling match one of us had booted out the back speaker with our sneakers.

We hadn’t realized we’d destroyed the speaker. Dad noticed the next day, replaced it, yelled about it. He called us Tasmanian devils, which was true. We'd muscle through the house and shatter lamps, delicate knickknacks, mom’s collectible John Wayne plates. Now he pointed at the headliner and said, “Last time you guys would never admit to who busted the speaker, you acted surprised. We were framed, you said. So now, until one of you admits doing that—” He wagged his finger at the hole in the headliner. “Until you confess, you’ll sit here.”

And Will said he didn't do it. So Dad shrugged, scratched his beard, and said, "Fine you'll sit right here. That's that.” He left the car. He left the garage.

A silence all around.

Just the sound of the kerosene heater going tic-tic-tic.

Just the sigh from my little brother.

He laughed and said, “Yeah right. I know you did it.”

He shook his head. He said, no he really didn't do it, that’s how he knew I really really did do it.

Dad came back 30 minutes later and neither of us would admit guilt.

He came back 30 minutes after that, nobody would still admit. Next time he came, we said we had to go to the bathroom, so he took us out of the garage and let us pee in the woods. We were encouraged to pee in the woods anyways, that's the other thing we got in trouble for, we always missed the toilet when taking a piss. "What the hell is wrong with you guys!?”

It must be so hard to be a father.

Piss all over the wallpaper.

He should've taken us out to the garden and taught us how to water the flowers with a garden hose, same principle. Same idea. Point the hose at the flowers.

After our bathroom break, we walked out of the woods, and he took us back to the car and sat right back where we were.

"Life is about responsibility,” he said. “Sometimes you mess up and make a mistake, and you have to confess to what you did and get on with the consequences. Who did this to the headliner? Bud? Did you? Will, did you? Did you both do it, do you want to take the fall together?"

I said with confidence, “Will probably did it.”

Dad left, furious now, he just couldn't get through to us. My homework was brought out. One plus two equals three. Spell the words through trail tough throw and through. Write definitions. Will just sat there bored. Dinner came out next. Fish sticks and French fries. Dad ate his food in the passenger seat. Munch munch munch. We sat in the back. Radio playing a cassette, Full Moon Fever by Tom Petty. After dinner, the radio was shut off, plates were dragged back in the house. We were both still pleading not guilty, and the court of Dad was accepting no plea bargains. Another woodsy bathroom break. "I don't care, you guys can sit in the car for the rest of your childhoods. Graduate high school in the backseat of that car. Get married in the car to each of your future wives. Raise your separate families in that car! Die in that car! Be buried in that car one day many many many years from now. Cool? That cool guys?”

Back to the car we went. Mom came home from the factory, tired and pissed. She came out to the car, yanked the door open, “Get in the goddamn house!”

In we went, thinking we’d get the wooden spoon. Maybe we’d get our asses beat with the spoon and the trouble would all go away how it usually did. But it was funny, you know? And there it was! The spoon! Whap whap whap! The spoon didn’t hurt, we had to pretend it did. I remember feeling like we were just indulging her, taking our licks, deemed guilty by the court. But after the minor beating everything was fine again. Dad wasn't mad anymore.

He was disappointed in us, sure, but even I knew that becoming an adult was all about disappointment. Having to work hard and never getting quite ahead. Having the people you care for lie to you. A half hour later though, he was chilled out. Me and my brother were able to get him to talk like Bugs Bunny. Like Yosemite Sam. Suffering succotash. We made him do the Mickey Mouse voice. “Okay, now Porky Pig,” he said. “Be-dee-ba-dee-ba-dee—that’s all folks! Time for bed! Bedtime for bozos.”

Mom kissed us. Dad kissed us. We went to bed. We had bunkbeds. I was on the bottom, Will was up on top. Sometimes he used to roll right out of bed and crash down on the floor in the middle of the night. I feel like the kind of thing would kill an adult. But that's how it goes. You survive more as a kid. Just rub the boo-boo, get back to bed. Period.

The door opened and the flash of yellow light from the hallway, and Mom hissing, “Go to bed! Do you want me to get the wooden spoon?!”

Laughing when she left. Door shut. Back in the dark. “Want to hit us with a marshmallow, instead? It’d hurt more.”

A couple days later, Dad was in the garage, with the kerosene heater going, and the new headliner from the junkyard. He was just about to start pulling the ruined headliner down. He had his tools ready to go. The radio going. Out of the hole in the headliner, popped the head of a mouse. Dad saw the mouse and flinched. The mouse disappeared back in its hiding spot. He yanked the headliner down and the mouse fell on the back seat and scurried away. He tried to catch it, but the mouse jumped out of the car, and who knows where after that. He put the car back together. Then he turned the kerosene heater off, and went into the house. He gathered us all together and told us the incredible story of this crazy mouse.

We liked it. We liked hearing that. Mom did too. She looked a little misty. The family had learned a lesson together. It’s okay to admit you are wrong was the lesson.

But after that, me and my brother knew it a different way. We knew we didn't have to admit to anything.

Ha ha ha! It was probably some mouse!

Bud Smith is the author of WORK, Double Bird, and Teenager, among others. He works heavy construction, and lives in New Jersey.