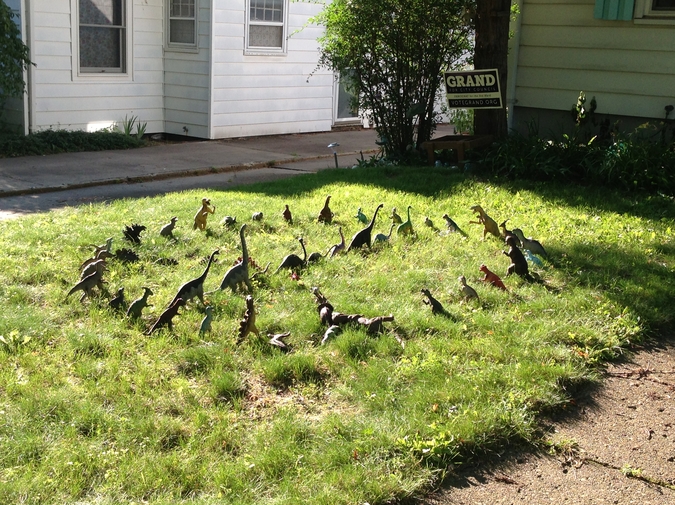 Day one, just a few hours in, and the first scratches from his insides, just a little suggestion: only a nibble.  He tries to kill the animal stuck there by gulping down water, by dousing it with that tasteless ether, and it works, if only briefly, before it returns; there, again, a little sharper, a cut a little deeper.  He grasps his sign tighter as if it will help people read it: I DO NOT SUPPORT CHOLESTEROL DEATHS.  Some laugh as they walk by him.  Some lean in for a closer look before continuing their mobile phone conversations as they tend their business.  He watches happy families ignore him as they enter the restaurant.

Day ten and the hardest is over.  His face itches and sometimes he feels like he has the strength to scratch there, and sometimes he just lets it go on itching, because, after weighing his options, it is simpler that way.  Some time ago his shirt came off.  That was at night.  His friends bring him steady jugs of water like he is Jesus on the cross, but they do not look at him like he is the son of God.

Day twenty-two and things are serious.  The management has talked to him on several occasions and so have the police.  All look down at his stomach, which strangely protrudes, framed by a now evident rib structure beneath.  The bottom ribs showed first, like the teeth of some smiling giant.  He hardly has the breath to tell them how he uses the bathroom, how he doesn’t need to shit anyway, not ever, how everything in his gut feels like a locked safe and how with each passing moment he knows it will be harder to crack it.  The cops shake their head and say they can do nothing: he is sitting on his own lawn.  The manager’s face reddens, he gestures toward his parking lot, he complains about business.  But they do not stay long.  A smile stretches his lips thin.

Day thirty-seven.  Temptation today.  All day he smells the food across the street, but it is not that.  No, today he sees a centipede crawling over his toes.  He does not feel it, and that horrifies him for a moment—what has happened to the nerves there?  And with great effort he raises his slender leg and wiggles his toes.  They move reluctantly.  He picks it off his foot and holds it up to the light.  Would anybody see him?  He glances furtively about.  It would be over as quickly as a wicked thought; it would explode between his teeth, which have all but forgotten how to chew, and the sweetness inside would come gushing forth.  He closes his eyes and when he opens them again he sees that the centipede is gone.  His heart jumps because he fears that he has failed.  Then he sees it crawling slowly and happily away from him.  He had not even had the strength to fling it further than his own one o’clock shadow falling across the grass.

Day fifty-eight.  A little girl comes to him and asks him why he does not eat.  She holds a soggy hamburger out to him and he smiles, wondering if his face looks like a skull buried in a beard, amazed that the girl is not scared enough to run away.  He does not have the strength to take the sandwich from her and so he slowly shakes his head.  “It’s really good,” she says to him and he wants to tell her, I know, that’s what the problem is, but he does not have the spittle to wet his lips sufficiently to say all those words to her.  He glances at the mother.  She is standing with her arms folded across her chest.  And then, a strange development: he begins to laugh.

Day sixty-seven.  Who knew the last days could be so like the first?  Here is the pain again, the doubt and the wonder.  People that barely registered his existence now crowd around him on their lunch hour and look into his sunken eyes with eyes that betray pity.  Reporters talk to him but he is already speaking with God and his answers are hardly appropriate to their questions.  He sees it all as though from above.  The drive-thru nobody drives through anymore.  The flies buzzing above his thin, matted hair.  The group of teenagers standing off to the side, eating ice cream and savoring it special for him to grow invidious.  None of them matter.  His body does not matter, nor his brain, nor his breath.  There is a soul inside there clawing to get out.  That is the thing.  That is the thing that matters.  This is the thing he tells himself as he watches from above, and he repeats it over and over until he believes.

Jake Walters has been published in numerous journals, including Fractured West, 34th Parallel, Corvus Review, Allegory, the horror anthology America the Horrific, and many others.  He currently lives in Transylvania, a place of the world with which he is intimately familiar, after serving three and a half years there as a Peace Corps volunteer.