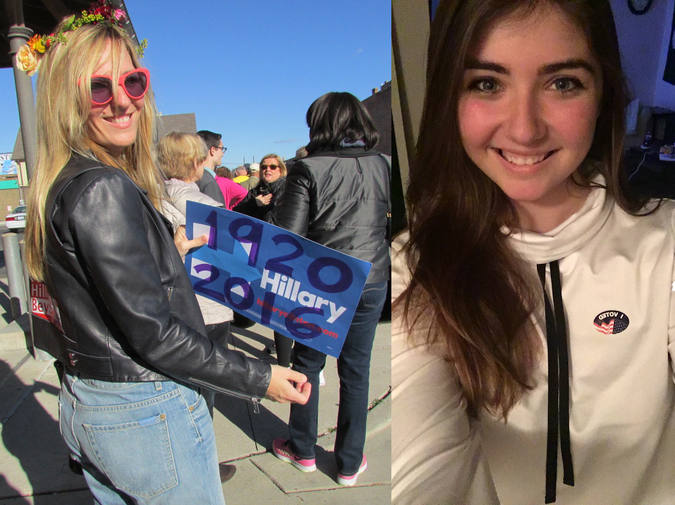 My daughter was voting at her university, an hour away

It was her first time voting in a presidential election

She texted me early in the morning, “Wear white for the suffragettes!”

She had classes all day, her job as a lab assistant in the evening

I was a freelance writer

I got to vote at noon

My polling station was her elementary school

It was a five minute walk from our house

She said, “Did she ever lie under oath?”

I strained to hear more of the conversation

I was curious myself, now that she’d brought it up, even though I didn’t give a shit one way or the other

The woman said, “I don’t know. ABC didn’t cover it. I don’t even think Fox covered it.”

It was an interesting distinction, lying under oath versus just plain lying

Twice my daughter had run for class president, in 3rd and 4th grades

I had admired her tenacity, her unwillingness to run for a lesser office after the initial defeat

On three different occasions I sat in the principal’s office, pleading for the school to do something

I said, “Every day at recess my eleven year old daughter is being called a ‘slut’ and a ‘whore,’ the boys tell her repeatedly to ‘suck my dick’, tell her she’s fat.”

The principal, who was a woman, refused to move the boy into another classroom or to punish the boy

She said she had spoken with the boy’s parents

I’d seen enough of her crying; we went to Dairy Queen a different day, the two of us

On Election Day I followed the line as it snaked through the entranceway to the school, past the principal’s office, down the opposite side hall near my daughter’s fifth grade classroom

I remembered similar male faces and biographies on the walls of the school when my daughter had been a student eight years earlier, a similar lack of female representation

The whole town was for Bernie

Party line meant less to me than gender

I didn’t give a fuck

I felt pretty good about my choices on my walk home

I didn’t think it was Hillary

When I got home, I texted my daughter

“I’m turning into such a feminist,” I said

I told her about my observations of her elementary school building, how there weren’t any fucking women

I went upstairs to write; I forgot about the election

It was 7 when I came back downstairs

“I’ve been in line an hour and 40 lol,” my daughter texted. “I’m extremely determined rn,” she said

“and so bored,” she said. “just been meeting a ton of ppl in line lol”

“everyone’s nice and they passed around a lot of pizza which helped,” she said

“being in your old school made me so angry at the school and at myself for not doing more when you were in fifth grade,” I wrote in a text.

I added a hashtag feminist to the text before I sent it.

“I promised myself I wouldn’t post politically on social media but then I got bored in line so I did lol,” she said

“I posted on FB ‘It’s a beautiful evening to shatter the fuck out of the glass ceiling #imwithher’,” she said

“so I’m a super feminist now,” she said

I smiled. I told her I was going upstairs to do yoga.

I added a hashtag superfeminist to the text before I sent it.

I took my daughter’s lizard up with me

I looked over at the lizard; she was lying with her arms back, palms up, under the table

I went back downstairs to check my phone; forty minutes had gone by

There was a photo of my daughter, smiling, an “I voted” sticker on her university fleece

“It was amazing!” she said

I immediately started to bawl

I was sitting on the edge of my bathtub

I’d never been this emotional in an election

My whole life I’d been in denial

I stared at the face of my daughter; so happy and excited

She would know how hated we are

I didn’t want my daughter to know, I wanted her life to be different

I wanted my daughter to feel her vote counted

She already worked so hard at her university

I tried to focus on the positive

I texted, “we need to remind ourselves Hillary has already broken a glass ceiling running for president”

I said, “we need to focus on the positive”

“I’m just excited that my first time voting in a presidential election was for a woman,” my daughter said

“that’s so exciting,” I said

Elizabeth Ellen wrote this poem between 7 and 8 pm the night of the election.