Eight Scenes from the Life of a Professional Raven 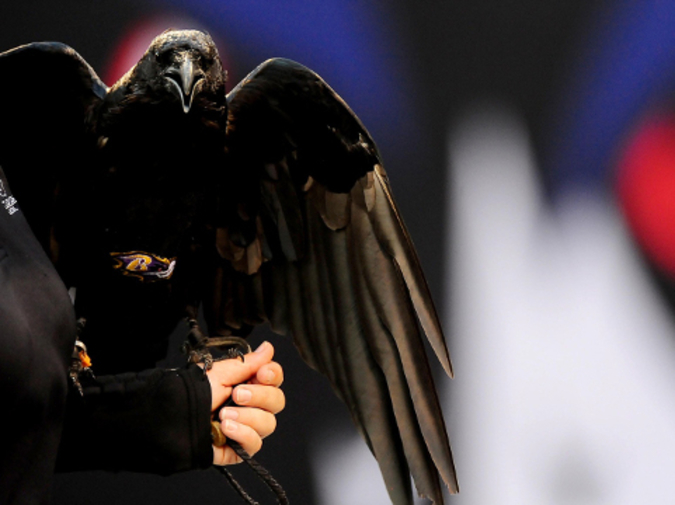 The sky every morning tells its own story, and today when I wake before sunrise, I look up and see it is going to be a bad day. It’s hard to explain, but there’s a sense you get. You live long enough and you can read the clouds, and you can hear distant flocks migrating, and you can see the weather before anyone else.

There’s going to be a storm, and it is going to rip through this city like god’s own scythe during harvest.

I arrive at the stadium before everyone else and get into character. I bathe in the fountain they’ve built for me, then I slip my head into the jersey and push my wings out the holes on the side. I step into the pants and pull them up with my beak. Later, they will apply the faux-cleats to my feet. Sundays, I work all day.

The work is easy and the spectacle is fascinating. When my team scores a touchdown, I have a few seconds in the spotlight to do my dance, to captivate the crowd. I pretend in front of my flock that I don’t enjoy it but I do. I am more vain than I let on. During games I shine brighter than any bird has every shined.

The globe is changing, the weather does not do what it used to do. We won’t always be able to count on the earth providing, the early bird gets the worm, but then what? Eventually, there are no worms left.

Slowly, my co-workers appear. Some greet me. Others steer clear. The room gets progressively louder, first with their chatter and then with their music. They are pulsing with adrenaline and violence.

I spread my wings and call out. The sound echoes off the walls and fills the room and I am ready to perform.

The game begins in five hours. Throughout the day, I am required to appear on various television shows and to make surprise appearances at tailgate parties. I am capable of imitating their voices, but I am required to be silent. The mascot does not have a voice because this is tradition. A mascot with a voice would frighten the people, who are simple and want simple pleasures. During my first year as a professional raven, I was swept away in the frenzy of a celebration and was caught on camera yelling several human words. I nearly lost my job. So now all I do is flap my wings and nod vigorously and high-five fans. Sometimes they’re too excited and I am afraid my wing will break. But they also underestimate how strong I am. They assume because I am a bird, even if I am an abnormally large specimen, that I am brittle. Hollow bones, they know about. The one thing their science classes teach them about birds is hollow bones. Men have hollow souls, and they are flightless.

No bird can truly trust a man because men eat birds by the hundreds. The beginning of football season means a massacre of chickens that will be slathered in barbecue sauce. Humans are hard to respect as a species, but they have the guns and they rule the land, and we need to honor that. Failure to respect man’s capacity for violence is the deadliest mistake one can make.

My mate and I built our nest three years ago, after I got this job. The previous raven had died suddenly. People are afraid of ravens, and people are afraid of death, but ravens are afraid of neither. Ravens hold no delusions about our place in the world or the necessity of death. We live in cemeteries because we can be left alone and because there is something comforting about the cycle of life. Our nest is built in a hundred year old tree above a former soldier’s grave. When we arrived, it was an open hole in the ground. My mate’s beak elegant, curved like a scythe, gleaming in the sun as she carefully placed grasses in the nest. She is better than me, at nest building, at most things. We watched them lower the soldier into the ground while they played a bugle, and we stayed as still and solemn as we could. The widow kept eyeing me, and once waved a funeral booklet at me. I understand that seeing an oversized raven perched above your husband’s grave may seem ominous, but this is the place where I live. I have no responsibility to the living nor the dead.

There is a player on this team who is beloved by the fans and the media. He and I make many public appearances together. He is very good at his job, but he is also an asshole. This is a human word that I first found meaningless, but now I realize it is the perfect descriptor. He has the voice of an asshole. Every time he interacts with another person, he does so assholishly. He walks with the gait of an asshole. When he runs, he does so with the speed of an asshole. In the locker room, he receives medical treatment like an asshole. When he takes naps, he looks like nothing so much as a sleeping asshole.

My job is to flap my wings and flex my muscles when he is on a microphone and shouting about god or his muscles or the intensity of his desire to win. My job is to pretend the only thing that matters is that he is strong and fast. Now he is kneeling in the middle of the field and praying. He prays publicly so that everyone will see. The rain pelts him and runs down his face like tears. He is an asshole, but he is smart enough to know that this pose will make him even more famous, the mud-streaked linebacker performing piety in the middle of the field while his nation’s flag billows in the background. It will make the fans think of love and sacrifice and war, in that order, and it will reaffirm everything they want to believe.

A local ornithologist sends me weekly fan letters. He says he wants to study me. He frames it as a favor to me. But birds are not asking to be studied. We are not inviting science into our lives. I knew a raven once who had been captured by graduate students at the nearby college. They’d kept him in a cage for weeks until we thought he was dead. One day he reappeared, with metal bands around his legs like handcuffs, with a computer chip buried in his flesh, with his feathers ruffled and dull, with a hollow look in his eyes like he’d just returned from war. Science means well but science has no sympathy for its victims. Science creates pesticides and bombs and if a scientist thinks I am going to trust him, then he does not understand the first thing about birds.

The stadium rumbles, first with cheering and then with thunder. The lightning will be here soon and the people will scatter. Everyone is covered in layers of protective gear and they huddle together into lumpy, drunken masses. Those who consistently confuse me for a crow know that a group of crows is called a murder, but most don’t know that the term they invented for a group of ravens is an unkindness. The collective noun for a group of men is a belligerence. They are bellicose and drunk and they carry death in their hearts. I stroll to midfield and let the rain wash over me, roll slick along my feathers, and I watch them. I am not allowed to fly; the team’s insurance policy does not cover flying. If only they could see me hunt. If only they could see me tear this jersey and these bulky shoes off and zip from one end of the stadium to the other, catch a leaping grasshopper in my beak mid-flight and slice through the air like traveling through time. If they could see this, they would never care about the spectacle on the field again. If a group of ravens could descend on this field and demonstrate for them true athletic genius, then what would they do?

A gunshot crack of lightning strikes the ground just outside the stadium, and the crowd gasps. Then three more in quick succession, the flashes blinding. The rain glistens on my wings and through the downpour I can see the humans scrambling. I remain as still as I can, try to be the hub of calm in the chaos. Storms happen everywhere. The humans, for all their mastery of physics, cannot handle rain. The rain terrifies them. The lightning reduces them to children. It is still supernatural to them, because they don’t understand nature. Wind gusts scream through the stadium, ripping hats off the heads of coaches and tipping over tables. A tornado of debris swirls in the stands. The players have retreated to the locker room. Over a loudspeaker, someone calls for calm. The rain falls so thick it’s near impossible to see. Nature’s violence calms me in a way nothing else can. The sound of the atmosphere tearing itself in half is like the feeling of your mother’s heartbeat.

The storm continues for three days. The game was never completed because the conditions were deemed too dangerous, the field unplayable. They present themselves as invincible, but only if it’s not too muddy, only if there is no electricity in the sky. Everyone in the city retreats to their homes and tries to wait out the storm as roads flood and trees are torn down by the winds and people lose power. Nobody visits the cemetery in these conditions, so we are alone. Our tree creaks and moans with each gust of wind. We may have to relocate, but until then we imagine the worms and grubs rising to the surface, wriggling in puddles and waiting to be eaten. My mate and I leap off the branches and soar over the cemetery and try to understand the stories of all these people in the ground below. We are surrounded by failure and degradation and there is nothing else to say. Tomorrow I will go back to work, not because I love it and not because it matters, but because this is what life is. You report for duty and you report for duty until one day you don’t anymore.

Tom McAllister is the non-fiction editor of Barrelhouse and co-host of the Book Fight! podcast. His novel The Young Widower's Handbook will be published by Algonquin in February 2017. Follow him on Twitter at @t_mcallister