May 16, 2019 BASEBALL, Dispatches from the Treehouse

Dispatches from the Treehouse: Tuesday, April 1 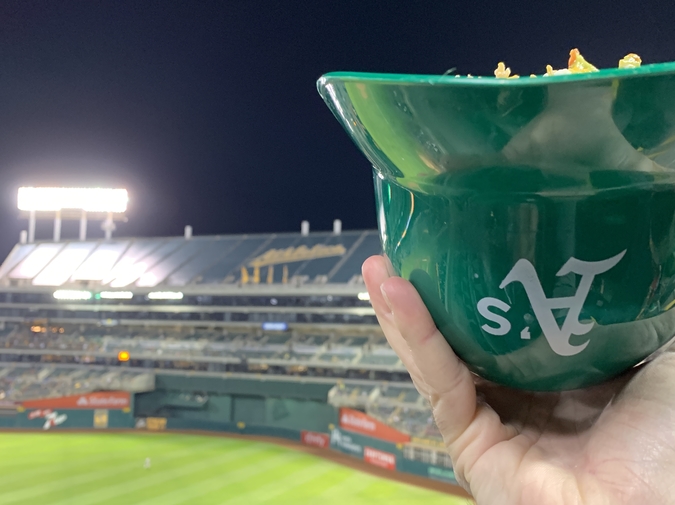 On BART, the East Bay hills are lush and green after a winter of heavy rain. By the end of the summer they will be burned out and brown; the fires will be back with the apocalyptic talk of 40 million people in California and the state will have forgotten all about this moment when everything is at its most alive. But the end of the summer is a baseball season away and that today is an unimaginable distance.

There are commuters headed home, bike assholes, techies double-fisting phones, people sleeping, people talking to themselves: the usual. In Berkeley, a few green elephant shirts and hats show up, and in downtown Oakland, the same. Somehow, it is always these fans’ first time on BART: they obsessively scan the map, they chatter ceaselessly about where they parked, they try not to stare at the weirdest thing they’ve ever seen, and they ask white people where to get off for the game. The train goes underground in Oakland and re-emerges on the way to Fruitvale. East Oakland: trash now on either side of the tracks, abandoned car lots, the Fruitvale Bridge that marks for me the new condos deposited on the Oakland Estuary that our realtor showed us a year ago in the “up-and-coming” neighborhood of “Jingletown,” which at the time sounded wrong and has only felt ickier with time. The tent cities have migrated under the overpasses because of the rain. This is no way to live and the only green here is the jerseys and hats in the car but still it is baseball season and just in this little world does it feel like we can start over and be better this time.

After next year, the Athletics will be the only professional team left in Oakland, and this is as it should be. The A’s have always been a team both permanent and out of their own time. A team famous in the past decade because Brad Pitt worked for them in a movie. A team that defies expectations and regularly gets called “surprising” and “impressive” because there are no expectations. A team capable of outsized success and terrible failure in a town growing impossibly wealthy and desperately poor at a frantic pace. The Town, as Oakland so wants to think of itself, smaller and more intimate than the City across the bay, is seemingly helpless to stop this cleaving at its seams. The Town: the next stop for people building apps and selling stock and the last memory of people who built ships and canned fish and fruit.

The Athletics, of course, are a young team, capable again of writing their own history. A team that is always starting over in a Town in the middle of forgetting itself. These days, the A’s trend with the hashtag “rooted in Oakland,” which plays on the Town’s namesake giant oak trees that once dominated the East Bay before they were chopped and burned and hauled into the sea. In this they are right. The Athletics belong in Oakland because they are Oakland, but as with everything that can be taken, on this coast of change where anything can be cast aside, they stay because they have survived. The last game I saw last year, the A’s won on a walk-off wild pitch steal home. It doesn’t matter how you win.

The Coliseum station doubles as the connection for the tram shuttle to Oakland Airport. By the time I get off, the car is either A’s fans, travelers with rolling bags, or people who are not either of those. I don’t know where they are going, and I will never know. I’ve never ridden south of this station.

Tim is waiting for me at the footbridge to the stadium. He’s head-to-toe in Red Sox gear. Back when he had a job, he spent hundreds to go to the clinching game of last year’s World Series. “Go Sox!” he shouts to anyone wearing red. We walk over the prisonlike concrete bridge from the station to the Coliseum, passing over a stagnant gray estuary to the Bay and piles of rusting extra seats brought in, once, for football. People openly sell off-brand merchandise and beer next to Oakland police.  The years-away plan for the A’s new stadium in West Oakland, on the water, calls for gondolas to ferry people from the nearest BART station to the glittering glass palace. Gondolas.

“This is the worst stadium in baseball,” Tim says. “I love it.”

There is no better place to watch baseball in America. At the end of last season—an improbable one, by any stretch—the Athletics management decided to capitalize on the team’s run to the playoffs and its still-struggling attendance in the cavernous Coliseum to introduce the A’s Access program. For $240, you could go to any and all home games during the season, restricting yourself to the outfield Treehouse bar and some general admission seats. For marginally more money, you could buy packages of games with real seats anywhere in the park. Everyone in the program had permanent discounts on food, merchandise, and parking. One of the major taglines in the early rollout was that it made the Coliseum the cheapest place to go out for a beer in the Bay, which is probably true. The A’s say it’s the first plan of its kind in baseball, and even if that’s not actually true, there’s a wonderful sense of desperation and disruption that makes us feel like we’re getting away with something special. It is easy and it is cheap; you can go to baseball not as a special occasion or with a month of planning or with your fucking office but because there is a game today and the weather is always nice and you like baseball.

Tim and I are early. We walk to the Treehouse, flashing our photo Access badges at every opportunity, calling ourselves co-owners. The fact that everyone else has them and that we hear this actual joke several times elsewhere does not deter us. There’s a DJ stand, the local television broadcast setup, games for the kids, good seats, and a food truck featuring an East Bay restaurant owner featured on Top Chef. There’s also no one guarding the rest of the stadium and we immediately leave. We sit four different places in the park and are never once asked for our tickets. This has been the way for years at the Coliseum—the general feeling, from ushers to management and the players, that everyone’s just glad you showed up at all. With the badge, beers are $5 (the good stuff too: Drake’s, Founders, Ballast Point), peanuts $2.50, hot dogs around $3, fancy helmet nachos $7.50. You can get in real trouble here with minimal effort.

We like to sit on the third deck where we can be the only ones in our entire section. Once last year, for a few innings, we were the only people on the entire deck.

“If the Jumbotron comes to us,” I tell Tim, “I am going to pretend to be your husband.”

“They’ll come back to us throughout the game. A’s fan, Red Sox fan. A house divided. Both Access members. We’ll be famous.”

Tim considers this. He is measuring, at least a little, exactly how much of the everything we know about each other. He is also thinking about how gay Oakland is compared to his beloved five-block walk to the Castro in San Francisco. “Are we going to kiss?”

This is a good question. “Like, if it’s Kiss Cam?”

I now consider this. “No.” I say this for his sake. I would do it, but I think I’m going too far out of my lane. There is probably an advocacy group at this game specializing in this kind of Jumbotron-provoked appropriation.

For Tim, this seems to confirm all he’s ever known about me as a person. Weeks later, for a midweek A's and Reds game, Tim will bring along the guy he's seeing, and I will again suggest they prepare for the Kiss Cam. The idea will somehow be even weirder then. “Right.”

“I’ll try to kiss you, you push me away, and then it’ll be like a drama all night.”

He shakes his head, turns to the field, and starts cheering for his future husband, Matt Chapman, up to bat. Chappie. “There is something very wrong with you. What would Kate say?”

My wife, who will join us for many of the games this season, wouldn’t care, because she knows I am an unwell and thoughtless person who really, really likes being on the Jumbotron.

We’re in line for beer and a guy in a Yankees hat turns to Tim, looks him up and down in his BoSoxery, and asks if he can buy his beers for half-price on our badge.

“Only if you say the Yankees suck,” Tim says.

The guy thinks about it, thinks about it for a long time, stares at the taps, and finally, slowly, refuses. Tim swipes him through anyway. “Why not?” he says when I tell him Yankees fans are the worst people on earth and he wholeheartedly agrees. “We run this place now.”

This, in our first game, reveals the genius of the plan: make normal idiots like us feel like we really, definitely matter. Anything that can produce even a temporary peace between the Sox and Yanks deserves a chance.

The A’s win, 7-0, and Tim starts grumbling about the beers he might have had.