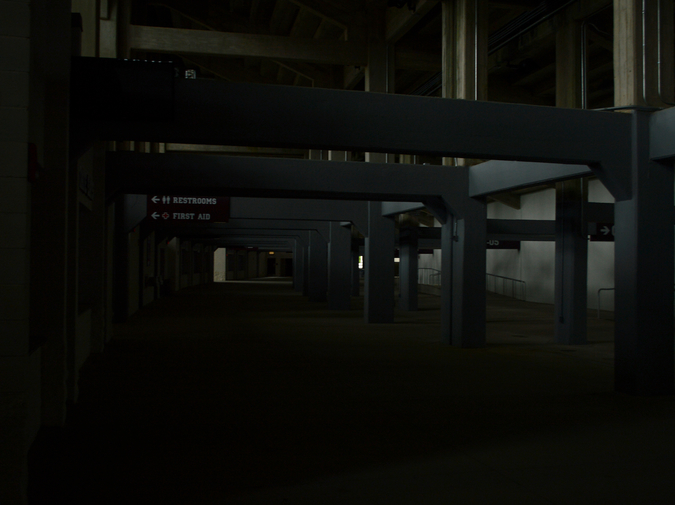 For the past month Wrat, a man removed from the dogtooth of language, had been hearing a scratching, needling noise clip the outmost walls. It sung erraticisms. A pattern since emerged of residents trying to stronghold the kitchen and confront the day’s skirmish from a position of power. Wrat’s survival relied on no one lasting, on crawling kitchenward to nibble what scraps remained. He had not eaten for two weeks.

He spent most hours wedged behind the sofa where cockroaches bed in the sprawling basement of a house that, as far as he knew, branched endlessly above the kitchen. At rest, the cockroaches coated Wrat like scales. At hunger, the basal kitchen twitched to maelstrom as groups and loners came from not just the lower few wings but the caverns built in the surrounding dirt to smash the walls and cabinets in search of canned foods. The cockroaches only ate when all was still and Wrat relied on their movements as signs of safety and danger.

He crawled kitchenward, eyes adjusted to the darkness, smelling dirt footprints to test their freshness. Roaches moved over him like he was just another root jut wall.

Wrat found tuna caked on the side of the cabinet. He scraped the food into a cupped hand and lapped it, too starved to see the cockroaches scatter. Something slit in and out of his shoulder and he collapsed to the tile and heard toed steps sneak upkitchen.

The cockroaches quickened to his palm and ate the tonguewet crumbs. Wrat felt his shoulder. It was moist. The roaches tried to work inside, and he flicked and flailed to keep them out. He grabbed a paring knife off the counter and hurried to the room, unable to outrun them but currently less enticing than the day’s still remnants. He cut the sofa and crawled in, cocooning between the lips as tight he could. A temporary fix. If he stayed long, the roaches would eat through the cushion, his flaccid limb.

In the last few months, his wounds had ceased to scab and scar. A small cut on his ear had stayed open weeks and was beginning to infect when he burnt it shut and left it black. But there was no more gas, lighter fluid, any kin of flame down here. Whatever once was had been hoarded, buried. The only hope for supplies was awaykitchen. He never went further awaykitchen than his room.

He drifted for six hours in and out of cosmic darkness, arms acid as he held the cushion. Purple phantasm pocked vision, eyes shut or not. He woke to the gentle snore of roaches, bellies full of their own dead. A cannibalistic reincarnation.

His shoulder dug pain through his body like an octopus’ tentacle or the root of a parched tree. The surrounding skin had dried to bark. Wrat removed his shirt as best he could, some threads had long since twined his own skin, and ramrodded the opening to keep the blood dogs in. Paring knife sheathed in dreadlocks. He walked kitchenward to seek stairs. The first set led to a single room. A nude pair, dead or asleep, nested by worms. He backed, anxious to move before hunger drove the day’s frenzy. Another led to a wall of dirt. Fingernail concavities. Tried failures to tunnel through. Scratch marks bed the rocks that halted all progress. He traced patterns till his injured arm began to convulse and held it tight. Flies passed by and led him to a stairway he had no choice but to trust and did.

Every fourth or fifth board was smashed off, fell to enclosure. He stepped over them as wide and swift he could. A hand reached through and tripped, pulled him down. A darkness his eyes could not learn. The penumbra about the slight opening rot by termites. Tapelike flesh pinned him to wall. Nibbled off burnt ear. He tried to fist his healthy arm but could not and twisted till his assailant lost grip. He pulled paring knife from hair to wild stab all he could not see. The sound of collapse. Wrat’s toes sniffed for edible meat. The man’s wounds were dry like a creature hooked and drained. The flesh wrinkled. Wrat took his ear from the dead’s mouth and ate it himself. The taste of ash. He caked the fresh hole in his head with dirt to keep termites out, the skin long since dead. He curled up as a child might and went to sleep, woke to his stiff arm convulsing and cradled it in his lap. He cut ropes of hair out with his pairing knife, tied them together for a string to wrap twice around his body and stabilize arm to side. He lay breath then heard a drumlike noise. The stairs tremored beneath running humans who leaped floorboards and shoved and stabbed as they ascended. The hollow scream of frantic death. Wrat pushed tight to the earthen wall and watched termites dance with every step.

At quiet, he put a hand on the exposed board above and it shook but held him as he swung through the gap. He looked to where the exodus had come. The angled hallway kept him from seeing far, but he heard the needling and scratching grown louder. He covered an ear to make sure it was not sourced from his own head. How tempting to walk kitchenward and regain his orientation. To gamble, profit on fear. What bounty could be sat abandoned.

The noise felt like the pressure of crashing ants. A suffocation of tiny fangs. The stairs curved. Gaps became rare then stopped altogether. Vines of root no longer shot through the walls, caked by frolic earthworms. His spinal cord felt moist. Half his body oilblack. His left side shrank as the right distended. An implosion. Blood dogs bent to trot where they only served to drown his bones.

He passed myriad doors before trying one. He smelled beans and walked in. Heart pumped incantations. Something like the sound of squished fruit. He fell, crawled out. A nail stuck from his chest. The woman emerged and looked down at him. Her form took him aback. Small eyes and thin hair. Plump skin, rigid posture, muscular throat. When she saw what diseased creature lay before her, she backed into the room.

Wrat roached upstairs. Blood dogs fled the leak with each thump. At the next door he crawled inside. The room lacked right angles and trod into darkness.

Books abound. He gripped the leg of a case and pulled closer and opened one, ran knuckles across the words, sniffed their indentation. Licked the corner and tasted a flat sweetness. The page spat mites on his tongue. He discarded it and cleared the bottom shelf and wedged behind it. The right side of his body grew numb and soft like a rotted peach, arm swollen around the rope.

Wrat opened another. A dusty, anatomical text filled with diagrams, sketches, arabesque figures. He flipped through and eyed the images. Stuttered at their logic. Sacrilegious in their implied order, their implication of causality. He tore out pages and caressed them against his hand and cheek. They trailed a white coarseness. He traced the lines with a wavering finger. Some images he knew from shaded self-exploration. The pleasure of seeing his own two-dimensional reflection, a textual recognition of his own parts and pieces. Their samenesses. Their differences. He focused on his organs to see if he could feel the ones pictured. He tried to outline them with his hand but it hurt to press.

He tore more pages out. They came easy but his grip was near gone and cramped at the slightest fist. Guided by the map he placed the sketched organs over his flesh where the book claimed them to be. His skin, so dirty, so sweaty, found no trouble clinging the pages tight to its pores. He gave himself a kidney, a liver, lungs, intestines. He gave himself a new ear. A new shoulder. Kerosene flesh.

He did not stop.

Eyes and teeth. Legs and feet. The integument of resurrection. When maggots found him they crawled aimlessly over the plane, trying to source a way in. He was too mummified to flick them off. Both arms locked. On the verge of suffocation Wrat searched for a memory of his birth and came up empty and searched again.

Jason Namey is an MFA student at the University of Alaska Fairbanks, where he is a prose editor for Permafrost Magazine. His stories appear or are forthcoming in Moon City Review, Phantom Drift, FLAPPERHOUSE, fields, and elsewhere. He is from Jacksonville, Florida.