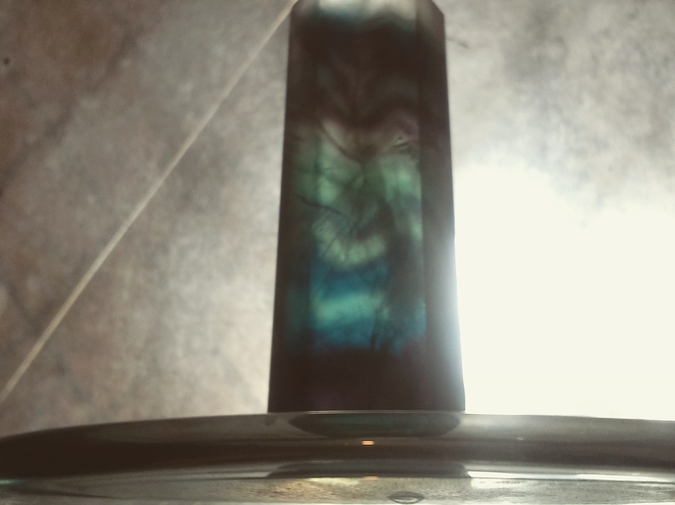 Lenore was at the cusp. I’m cusping, Percy, she rasped. Percy was unsure what to do about it. Press forward? Hang back? He took two steps toward her and put out a hand, as if she might fall. She threw him a sharp glance and then swept her eyes back to her hands, to their piebald, venous skin. She was laid out in the bed. She had such a prop of pillows as to seem the queen of some satin kingdom. On the bedside table, the MoveThru Filter hummed numbingly. Lenore took deep breaths and felt the sheets against her goose-bumps. Age had whittled her down to this, cold bones under their drapey covering.

What, she whispered dreamily, do you think it’s like?

Do I think what’s like what? Percy said. He put his two hands out in a confused supplication. Do I what?

Death, she said. What do you think it’s like?

Percy blinked. She always wanted to talk about it. He never knew what to say, not ever having given it much thought. Most people didn’t, until they were close to the end. Percy was her youngest brother, junior to her by twelve years, a surprise to the family, and now that it was just the two of them, a continual surprise to Lenore. He was so well-meaning, but even at this late date—he was, after all, 88—still so constantly befuddled by the very basics of human interaction.

Percy, please bring me some water, she said. And may I have a blanket?

She huddled into the sheets. Her fingers played along her Thrum5xe, still top-of-the-line since her nephew Matthias had gotten it for her only last year, on the occasion of her 100th birthday. Since then she had kept it always close by, noodling it with her crooked fingers to hear its bright tones rise and fall and jump, though she no longer had the breath to hum along.

This is it, she thought, the adventure of the end. She was ready for it. In fact, all her life she had prepared herself for it, recording everything and carefully cataloguing it. Her death packet was painstakingly complete. It was her life’s work. As a student, she had taken to heart the injunction of Michel Foucault, writing two centuries before, to make one’s life a work of art. She surely believed that if anything could be said to be the most important thing one could do with this brief confusion of human life, it would be this effort to represent oneself artfully in the new dimension we all enter after death.

Percy returned with an afghan knitted by Great Gran Gran (Triple G, as they’d always referred to her) and smelling of that sweet staleness that clings to wool garments stored for decades in dry attics. She thought of Triple G, who she had seen only at her end, a stout old German woman with off-color hose wrinkled at her shins like extra flesh. So we come around. Percy handed her a glass and she sipped from it with genteel delicacy, being too fragile for more than that.

Her fingers almost involuntarily tapped the Thrum5xe keys. She imagined them clicking and rubbing away even after she was gone, swiping out the Etudes of Jaroslav Borsak, which she had never got quite right and now would never continue to pursue, chasing the perfection possible in something when it is so worked over by your fingers, the way you meld with it, and by becoming its conduit, let it infiltrate and fill you. She would never have this full-bodied feeling again. But she had the Thrum5xe. She had Percy, hovering nearby as he had been doing for 85 years now, attending to her needs and watching her face for clues.

Now she would simply close her eyes and drift away into a long sleep. I’m shutting down, I’m shutting down, she whispered. It started to feel bigger than her, a process happening to her, a way of peeling her consciousness off of her meat like a skin. What would be left when the body was gone? Some tight organization of energy, a kind of pure agency, just waiting to be sucked into the MoveThru Filter. Some people preferred to come back as actual babies, achieved by genetic expropriation and re-instantiation. But Lenore had no interest in going through human life again. What a wash it was! So much unnecessary suffering. Gratuitous pain, gratuitous pleasure and joy. It was a hedonist indeed who would weather the lows for a chance at the fleeting highs. It was an obvious and possibly gruesome repetition. Lenore wanted a calmer sea.

So instead, she put in her application for the Fiction Department. Some small subset of death packets, instead of being shuffled through to live births, could be siphoned off for Authorial Inspiration. She’d decided to give her death packet to a writer, to be made into a vibrant character who would persevere forever, or as long as she was in print, but always with the possibility—however distant!—of being rediscovered by scholars or aficionados in some distant, culminating future.

Percy had not given much thought to her choice. He had no say, at any rate, in her decisions. Lenore would do what Lenore would do, and it had always been that way. He had always considered his job—nay, his purpose—to be one of support and facilitation only. After all, he had been the one to book all those engagements, and to keep the commotion of the house at a minimum, so that she could spend all her time in practice. She had almost—almost—had a brilliant musical career, would have had such a career if only he had been more competent when it came to negotiations and contracts and maintaining the connections with the various people and institutions that might have rocketed her justifiably to stardom. But she had not rocketed to stardom, and still, to this day, he blamed himself.

So in truth he approved of her choice—she was a suitable subject for Literature. He himself was planning a live birth, because he was nothing special, and the chance was good that he would come back with a neurotypical brain and finally—finally—get to understand what the hell these strange people were all about. The whole world being such a bafflement, and he simply not knowing the language of interaction, not being privy to all kinds of absurdly ambiguous subtleties that he couldn’t believe were just programmed into them all, those completely bizarre neurotypicals, programming he had not received.

Lenore put her glass down and settled back calmly. She had no access to what would happen. She sensed that it was not up to her to keep the consciousness together, and that it would be stripped down to its bare minimum, its patterns of essential processing, which would be filtered and then collected into the death packet file to join all the ephemera that she had so carefully recorded and converted to transwaves, all her memories, photos, and self-constructions (journals, clippings, compositions, awards, keepsakes, announcements, recordings)—not to mention the chest full of holographic copies of important objects—her grandfather’s penknife, her mother’s favorite porcelain bowl, the pressed flower that Alistair had given her that fateful night when he finally told her that he would not marry her after all. Once converted, the transwaves were uploaded to the database (Percy’s friend Oliver helped her do it, for he had the technical savvy), as a three-dimensional multisensory experience squeezed into a condensed subinformatic configuration, that could be downloaded and unzipped in the next dimension to which it was being sent.

That the next dimension existed she had no doubt. Many brilliant minds had theorized as much, and the best, most reputable companies, like MoveThru (whose reviews were outstanding), where she filed her configuration, were daily accumulating evidence of the efficacy of their methods of interdimensional transmission. And at the last she had thought: why not take a chance? What is there to lose? She thought of Pascal’s Wager, so many centuries ago, suggesting that we lose nothing, and possibly—just possibly!—gain so much, by gambling ourselves for God. Lenore felt that God was just another word for the mystery of our existence here on Earth, what it was made of, how it was organized, and how it would continue. Doctor Sanjay Gupta had the answer, and it was MoveThru. If she was lucky, someone good would pull her file, and she could coast a little longer on this whole “existence” thing.

The time had arrived, or was close at hand, she felt. She checked to see that the filter was turned on to capture her information signature as it left her body. Now she could let go of this form for the mediation that would presumably prolong her. In other words, she could die, because she knew that it wasn’t permanent. Death was the end of one stage, one form, and the beginning of another. She couldn’t know what it would be like across the line, but she could cross it with hope of finding herself somehow coherent and embodied, differently but again, on the other side.

Rachel Chenven Powers lives in Portland, Oregon. Her work has appeared or is forthcoming in Entropy, Eastern Iowa Review, Ghost Proposal, Identity Theory, and others. A graduate of Brown University and the University of Chicago, she also has an MFA in creative nonfiction from Portland State University. She can be followed sporadically on Twitter @rachbc