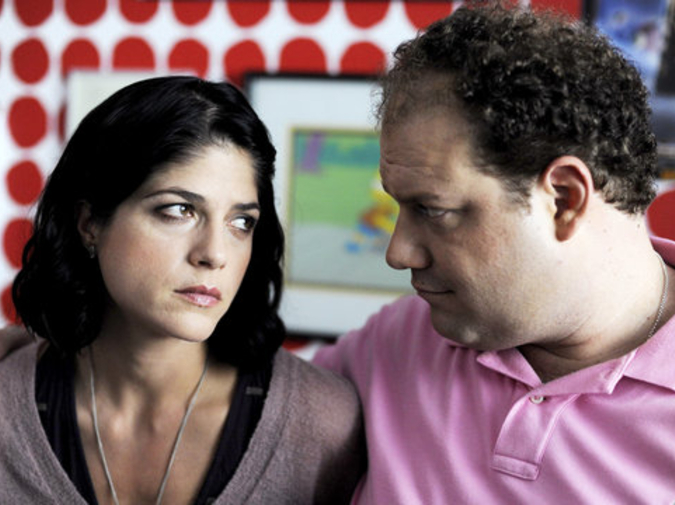 Okay, so the trailer makes Dark Horse seem like a fun, silly comedy about a man who might not be the most mature guy ever, but seems really likable. About twenty minutes into the film, however, I realized this was not the case. This movie is weird, and not good weird. Creepy weird. Main character Abe (Jordan Gelber) not only cannot function in society, he goes about his life in such an unlikable way that I had no sympathy for his “struggles” (also known as "being an adult"). His pursuit of Miranda (Selma Blair), a girl he meets at a wedding, is not nearly as endearing as was portrayed in the trailer. For one, all the characters in the film were written…strangely. Not once did it ever seem like I was watching real people. The whole movie just had this fake and artificial feel to it. It seemed like the characters were trying too hard to act natural and failing. The only character I didn’t have a hard time watching was Abe’s dad (Christopher Walken).

The plot was equally disappointing, as was the way Miranda’s character was written. She was the exact same hipster, depressed, edgy, emotionally unstable, mediocrely unattractive girl that it seems like every writer struggling with a female character throws into their indie film. I’ve seriously had enough of seeing girls who name their dog “dog” and have everyone love them for being “different” or “ironic”. Although the plot starts out okay, with a few surreal moments awkwardly thrown into what seems like a realistic movie, Dark Horse lost me at the end. Not only was I not totally clear what was going on, seeing as how random scenes are just spliced together in no particular order (to be artistic, right?), the film completely lost sight of what it had originally been about, and for the last thirty minutes, tried to become some weird...dream movie?...I think? I ended up getting so pissed off at this movie that I got up and started walking out of the theatre, but right then the credits started rolling. I guess I should have gotten up sooner. >:(