Crossing the Divide: Cycling, romance and reckoning in the Canadian Rockies 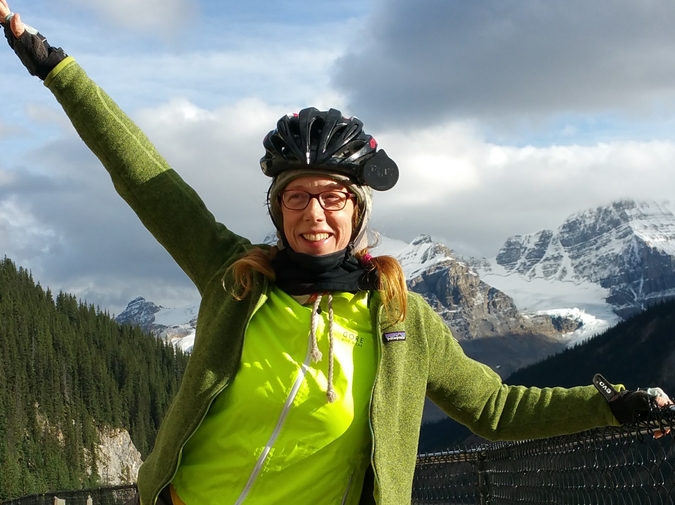 Halfway up a mountain on a clear Montana morning, I steered my bicycle to the side of the road. It was a 100-pound behemoth, loaded with a tent, cookware, laptop—everything I thought I’d need for an open-ended trip across the continent.

A couple eased their Toyota alongside me: “You’re out here alone?”

“I am. Just taking a breather.”

I waited for the familiar questions: Wasn’t I afraid? Lonely? Anxious? Not really. Not after several weeks on the road, during which curious strangers fed me, housed me, and generally flocked to my aid.

“Bicycle touring is a great way to meet people,” I said.

It was also a great way to leave them behind. After a dose of companionship that might last two hours or two days, I was glad to resume my solo ride.

The woman snapped my picture: a smiling redhead sitting on a stone ledge, one arm draped over the bike’s handlebars, a glacier-capped peak shining on the horizon. I was 51 years old.

My trip had begun in Seattle, where the past few years had served up one setback after the next. I had been cut loose by my latest not-quite-boyfriend. Gotten fired from my job. Lost my condo. Floundering, I finally gave up on normal: broke my lease, jettisoned my belongings, deleted my online dating profile and rode out of town.

Two months later, I was lying on a bench in Glacier National Park when a tall, tanned cyclist rolled up. He toted the same brand of orange saddlebag as me.

“Thanks,” he said in a German accent. “Want some pretzels?” He was pedaling a zig-zag route from New York to Seattle. Next up: 500 miles through the Canadian Rockies to the town of Jasper.

We sat on the sidewalk comparing maps. Unlike most male cyclists, he never bragged about the miles he’d conquered or how fast he’d done it. Instead, he told a funny story about crossing into Quebec wearing plastic bags in his shoes. The border guards had taken one look at his improvised foot-warmers and assumed he was carrying drugs.

“Lance Armstrong ruined it for everyone,” I said, returning to the bench. I watched the German out of the corner of my eye. His tattooed calves—koi swimming up one leg, geometrics dancing on the other—bulged beneath his plaid shorts. A pink bandana topped his shaved head. He was younger than me, but by how much? A decade? I scolded myself for speculating.

That night, we camped side by side in separate tents. “I never thought I’d meet anyone as lazy as me,” he teased the next morning. Most touring cyclists had hit the road hours ago, before the August temperatures spiked. But we loitered outside a visitor center, siphoning wifi. My “quick glance” at email mushroomed into a long exchange with a client. (I was freelancing to fund my travels.) Then, a phonecall. I apologized to my new friend for the delay.

“It’s fine,” he said, content to message his would-be girlfriend in Germany. Their virtual romance was unfolding behind her live-in partner’s back. I was quick to judge: This guy has a thing for unavailable women.

But wasn’t that me all over?

Despite years of therapy, I lived in fear of repeating my parents’ toxic pattern. Dad was a stellar provider, but often angry or withdrawn. Mom rehearsed countless resentments against him, and I learned her lines by heart. Their tense marriage had lasted almost 50 years, until her death.

She never left my dad, so I did it for her, time and again. I avoided dating until my 30s, then turned it into a quest for red flags. No matter how promising each new romance, the slightest masculine misstep sent me running. A charming Chilean admitted he was separated from his wife—not quite divorced, after all. Another man mentioned that he kept a bar in his apartment—tantamount to alcoholism, in my mind. Yet another guy wouldn’t walk me to my car after a late-night romp. I didn’t ask why. In each case, I simply delivered my exit speech—careful to use “I” statements, as I had learned in therapy—and vanished.

By the time I left Seattle, my longest romantic relationship had lasted three months.

I never expected to cycle with a 35-year-old German, or to laugh so much with him. Together, we leapfrogged down the highway, the age gap shrinking as we traded bits from “The Simpsons” (my specialty) and Joy Division lyrics (his). Noting my attachment to my green titanium spork, he conceived a TV show: “The Way of the Spork.” We improvised scenes (“You must earn the spork tattoo, Grasshopper”) while hiking to a glacier-fed lake.

When the German mentioned a genuine fondness for “Moby-Dick,” I suggested “Bartleby, the Scrivener.” The protagonist’s recurring line, “I would prefer not to,” became a running joke.

“Think we’ll run into a grizzly?”

“I would prefer not to.”

“Weren’t you going to take a shower?”

Upon learning it cost four dollars: “I would prefer not to.”

Just over the Canadian border, we mingled our clothes in a washer—my first time doing laundry with a man. A few days later, he bought a green fleece jacket that matched mine, cracking wise about our “partner look.”

We conspired in grocery stores, devising ambitious menus. As a solo cyclist, I had relied on ramen noodles and boil-in-bag Indian food. Now we piled our cart with cooking oil, coconut milk, avocados. At campsites, he diced onions on my collapsible bowl-cum-chopping board and I stirred the peanut sauce.

We had plenty of cooking burners, because the German carried three backpacking stoves on his bike. Investigating my compact folding model, he quipped, “You can’t really know a woman until you’ve played around with her stove.”

The heat was rising. Before overnighting in a Couchsurfing house, I trimmed my bikini line—just in case we ended up in the same bed. (We didn’t.) Another night, we simultaneously emerged from our tents for a midnight pee. We walked together to the bathrooms, but I hurried back alone, leaving him waiting in the moonlight.

I feared he’d mock any romantic move on my part. His jokes sometimes shaded into jibes and juvenile putdowns. Besides, he was hooked on his Teutonic princess. Her voicemails set him glowing with a pleasure that eclipsed our camaraderie. Mealtimes slipped into silence as he hunched over his phone.

I decided to get out. As I had so many times before, I rehearsed my parting lines and issued them without warning: “I’ve enjoyed our week together, and now I’m ready to continue biking on my own.”

“Oh.” His eyes widened in surprise. After one last dinner, we ambled around the twilit Alberta town where we had joked—only joked—about settling down. Instead of taking his hand, I twisted a candy wrapper around my fingers. This time, his phone stayed in his pocket.

In the morning, I held back tears as we divided our food cache. Moments from departure, bikes fully loaded, I asked another camper to take our picture. As we stood side by side, I slipped my arm through his—something I’d resisted all week. In the photo, we looked like a couple, smiling a little wistfully under a cottonwood tree.

“I feel like I’m always doing this,” I said.

We intertwined arms around waists. “You smell like honey,” I said, catching a whiff of his lotion.

“I know how you can get some.” We kissed gently.

That afternoon, we crawled together into my tent. Clothes coming off, kisses growing urgent, he paused: “I’m not sure I’m who you want me to be.” He assumed I wanted a commitment. But he wanted to keep the door open with his German paramour.

We wrapped ourselves around each other and barely let go for the next four weeks. Crisscrossing the Continental Divide, we canoodled at stop lights and laundromats, in hostels and small-town museums. Riding through smoke from forest fires blazing across British Columbia, we ducked under a chain barring entrance to a deserted campground. In the eerie silence, we climbed atop a picnic table to feast on each other.

I was leaning on a guy for the first time, and I liked it. Calling me his “little girl,” he carried me through the cool spray of an irrigation rig. Summiting one mountain pass, I arrived to find him waiting with a Nutella-filled tortilla wrap. On another, he held out his green jacket and bundled me for the descent.

We took plenty of selfies, but I avoided posting any cozy shots to social media. Broadcasting our romance would complicate things for him back home. At every wifi oasis, he hurried to connect his phone. I didn’t ask if he was messaging her—I had promised myself never to nag.

In early September, we reached Jasper, where Patagonia-clad tourists crowded the shops and elk wandered the streets. Time to separate. But after five weeks of round-the-clock companionship, we couldn’t.

We pushed 50 miles farther, to a snowbound hostel in the foothills. For two days, we drifted between our bed and a game of Risk unfolding in the dining hall. Someone asked where we’d bike next. “He’s going to Seattle to catch a plane home,” I said, my voice cracking, “and I’m continuing east.”

Our last morning together, tears streamed down both our faces. “Thank you for the amazing ride,” we told each other over and over.

We biked to the highway that would carry him west. Evergreens and gold-leafed aspen spilled across the hills. Standing under an empty sky, I gathered my courage. “I want to tell you something,” I said. “I adore you.”

He echoed my words as he rode away, but I didn’t need a declaration. During our ride, I had uncovered something more precious: the courage to let an imperfect love roll in.

Kelly Huffman has ridden her bicycle on three continents. Despite the fact she doesn't drink coffee, she keeps returning to Seattle.