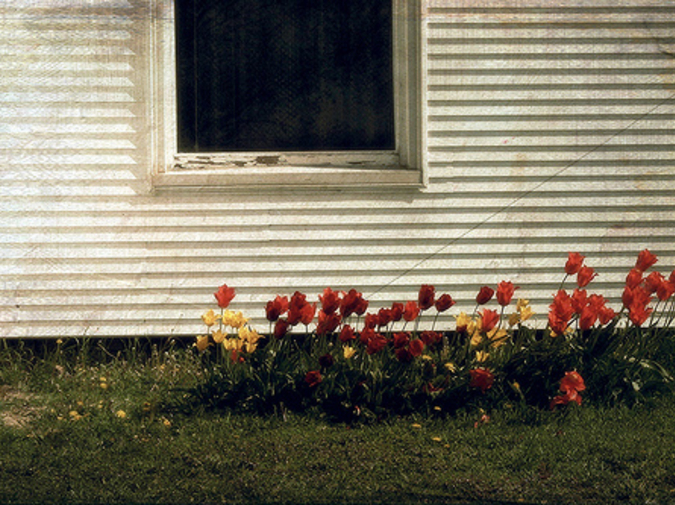 At night the air waits for Cassidy the way it does for a fuse to free its load. Then the great burst air gets to be, the blues and pinks and falling greens of fleurs-de-lis the stars might have made when stars were as young as Cassidy.

Coming along the path, Cassidy looks like he’s falling toward what’s stopping me: the screen in the door that keeps bugs between us—

though something’s eating through the screen—

How young is Cassidy? When ice on the lake breaks in spring, when anything breaks in spring, Cassidy is released from something green that I know has been waiting for me, and it is a fear-feeling, and it floats in the dust in the mirror after I haven’t eaten breakfast again.

These are fears that find different ways to me: sometimes it is just a cup I’ve lifted that brings me to a hole where I’m kneeling to see Cassidy.

Or a piece of paper I’ve forgotten to mail flaps like a carcass.

Or a pallor descends from ceiling to floor, brushing me.

Or looking through the screen I see an opening that used to be Cassidy; I see a bee sucking the opening; I see a swarm of openings forming a single thing that Cassidy used to be. (They keep their hive in a hollow tree. Their hum swallows me.)

Even gone, he gives off too many images—mist because the dew has to have its sunrise, the patchy flesh of the animal revived by what Cassidy would bring: Cassidy, but brought to me as if a thing to drink and be drunk off of, to wake up from with the feeling that whole lives of mine are missing—people I might have been had I not met him, people I might have met had he not been. Had Cassidy never met me, the mountains where my grandfather grew clutches of weeds for his family might have been flattened beneath some other family’s feet.

Combined with his, my life’s not mine—evidence of this is easy to find in drawers not often looked in: those aren’t my clothes, and they aren’t his; who is it then who lives?

I think I hear this other person sometimes.

I watch a woman where a window comes to drink.

I taste a surrounding mouth with mine.

At night, I am parted by the sides of something—something comes to drink from the birds that rustle softly in my chest.

In the gaps between my teeth, I see tiny other teeth.

I hear them blink. I let them eat.

Following the path Cassidy made through the grass to me, I come to my door. Through the screen I see what he would see behind me as I came toward the door: another door, another Cassidy raking his teeth across the screen.

The bedroom window opens me to so many bodies.

I sleep naked so that my teeth can see.

They are attracted by my warmth. They slip under and in. They double in my skin.

Other hair grows in alongside mine; there’s a new ring of blue circling my green eyes. I put my arms through holes made by moths and find the shirt that fits me fine.

My other size is usually much too big for me, so fear comes to fill it with everything I can see about how little it all has to do with me. It is a house that fear makes for me; it is a door with a chewed-through screen; it is Cassidy coming back along the path that stands in the trees and screams.

He is carrying something heavy.

I let him lay her in my bed, her head where my feet would be. Her feet are very clean, but her bare head appears to have been walking for a long time. There are leaves and dirt in her hair, and they fall onto the sheet. When she asks for a glass of water, I bring her the one I drink from.

Cassidy has gone outside to leave. He isn’t gone yet.

Where the path enters the trees, where light enters and leaves, his white shirt comes back for something I can’t reach.

Evelyn Hampton lives in Providence. Her website is Lisp Service.