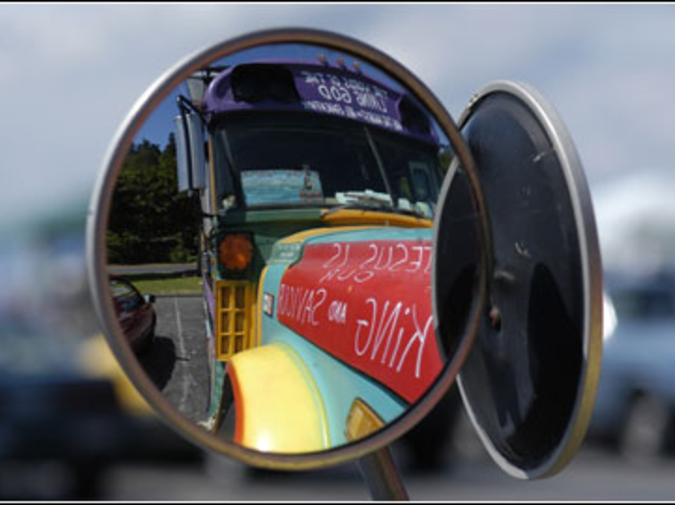 A note shoved under a sticky honey jar on a wooden spool table:

So sorry I had to leave without saying goodbye. Boo hoo. I wish you were coming with me! Now I’ll be the only girl in the car the whole way cross-country. Are you sure you want to go back to school? When I find a commune in the woods, you should come live with me. Maybe I’ll even find Shadow! I promise to write.

A Postcard of the Grand Canyon:

We stopped here yesterday. It was far fucking out! Dropped acid and mescaline, and after I stopped puking, I saw God. Mark and Bob had to beg me go into the building to pee. I just wanted to pull down my pants and squat by the side of the canyon. So what if there were other people there? They all have to pee too. Why should we all hide?? Say hi to everyone for me.

A Postcard of the Golden Gate Bridge:

Made it to the Promised Land! Put a flower in my hair – ha ha. A year late for the summer of love, but what a scene. Going to a be-in at the park tonight. Still want to find a place in the country. Wish you were here.

You will not believe where I am writing this letter from – Shadow’s house!!!! It’s so far out. Can you believe it?? After listening to me cry all year about how I would never see him again, after we ran down the dunes on the cape last summer and saw the glowing jelly fish and he took off all my clothes and all his clothes and we danced around naked in the moonlight, but I was a stupid virgin and he left the cape saying he wanted to move into the woods of California and live with a tribe of people. And then Hal said he’d bought some dope from a guy named Shadow who lived in Mendocino. And now, here I am!

I hitched with some freaks up the coast and wandered into this hippie restaurant. There on a bulletin board was an ad by a guy named Shadow in town selling a wood stove. I walked over and knocked on the door, and asked the hippie woman who answered if Shadow was there. I couldn’t believe it when I saw him! He was dressed in a long purple robe with a hood, and he was smiling at me. Last night we went for a walk to the Pacific Ocean, and I finally got to make it on the beach with my found again love-god. It wasn’t quite “From Here to Eternity”, since it was fucking cold (ha ha) and sand in the vagina kills. But I am happy.

Shadow told me about some freaks living in the woods nearby. I might go live with them.

You can write to me at “General Delivery, Mendocino, California.”

Pages torn from a spiral notebook, written in purple ink:

Sorry it has taken me so long to write. I don’t get into town much. In fact, I haven’t been to the post office at all, so if you already sent me a letter, I haven’t gotten it.

I have gone back to nature, back the land. I am living with a bunch of hippies in the redwood forest. It is the dry season, so it almost never rains and there are no mosquitoes. I am with this guy called Virgo Mike. He is so far out – very cosmic. It was amazing when I saw him here, because I had noticed his beatific smile in the common before I left Cambridge, and saw him again in the park in San Francisco, and when I got to the woods, here he was! It’s like we were on this journey together but didn’t know it yet. We are into the same trip. We don’t even have to talk, we just know. We are all trying to live like animals – not to think or do but just BE.

A few of the people here have made some structures – one guy named Skyfish lives with his chick Julie in a treehouse – but Virgo Mike and I just zipped our sleeping bags together in the middle of this circle of redwoods. He’s trying to make a home for us out of a big burned out redwood stump deeper in the forest. I’m sewing a robe for him, like Shadow’s. Lots of tiny little stitches by hand. During the day we don’t wear any clothes. We all cook a big evening meal together on the campfire in the meadow. A hundred pound bag of brown rice costs $15, and there are apples and wild huckleberries growing all around us. One of the women is pregnant, so she gets welfare, and that helps to feed all of us. Sometimes some of us go into town and scavenge for the perfectly good food that the supermarket throws out.

Have you dropped acid yet? You really need to. There are no words to describe it. You become one with the universe, and are filled with cosmic love. If everyone tripped, there would be no war because everyone would love one another. I feel like I can heal the world by making love to everyone.

Which reminds me…. Last week Julie and I hitched to a campground near Fort Brag, and snuck into their showers. Oh wow, hot running water. When I was drying off, some creepy looking straight guy comes up to me. “Are you a hippie?” he asks. I look down at my naked body. “Yeah,” I say. He takes a few steps closer to me. “ Do you believe in free love?” he asks. So, I’m thinking about his question. I mean, I guess I do, and I don’t want to lie, but that doesn’t mean I want to have sex with this creep. I am trying to figure out how I to answer the question, and while I stand there naked, the guy is just about drooling. Maybe it would just be easier to have sex with him, since I do believe in free love. Then Julie sees what’s happening and runs over screaming at him, “Get lost! The park ranger is coming!” and the guy runs away.

I hope you are great, and will come live out here. You would love it.

P.S. The leaves in the envelope are redwood needles and kinnick-kinnick, the Indian tobacco we smoke.

Pages torn from a spiral notebook, written in a dull pencil:

I got your letter when I went to town to mail my last one to you. I miss you!!! I wish you were coming here, instead of going back to school.

I have kind of lost track of time – it has no meaning here, there are no calendars, no appointments, just sun down and sun up – and I’m not sure where you are living now, so I hope this letter reaches you.

A few weeks ago some new hippies came up from the city. One of them was bright yellow with hepatitis, and we tried to keep him away from our water jugs and shit-hole. Another one who called himself Rocky had a fishing pole. He and I went to the ocean to try to catch some fish for dinner. He gave me some string tied around a rock with a hook at the end while he used his pole. Rocky caught one small fish and then we got busted by this ex-LA vice cop who is now a game warden. Fishing without a license. In the fucking ocean! Good thing I kept my shirt on, or I would’ve gotten charged with indecent exposure too.

When the Mendocino judge wasn’t in, the game warden drove us to Fort Brag and put us in jail cells. Then they took us to the courtroom where I was charged with angling, and Rocky (who’s real name turned out to be Norman Bernstein) was charged with angling and possession. Possession of a fish! The fine was $15 or three days in jail, and we had no money and no one to call. The rainy season was coming and the thought of having a roof over my head and three meals a day was sounding like fat-city. I asked the judge if I could go back to the woods first to get my birth control pills. He got all puffed up and said, “You won’t be needing those in jail.” But then the game warden drove to the woods and got the money from some of our friends, and he even cleaned the fish and gave it to us. We cooked it for supper that night.

My last acid trip, I was wandering through the woods and it was like living in a fairy tale. Every stump, every hill, was infused with meaning. I stopped and ate some wild nuts, and then came across a teepee where some hippies lived. I peaked inside, and there was a mother dog nursing a whole litter of tiny puppies. They didn’t even have their eyes open yet, and they were squealing and desperately trying to hang on to their mother’s nipples. They were so helpless. So helpless. I kind of freaked out. I felt helpless too. I needed a home, I needed a mother. I tried to talk to Virgo Mike. I needed some reassurance, some love. But he said I was too hung up on my ego. I wasn’t being cosmic enough. A few days later, when I got back to our campsite, his sleeping bag was unzipped from mine, and the next time someone went into town, he wrote “good squaws,” on the supply list.

I am thinking of going to Taos. I hear there are some good communes there. I don’t have any money, though, so I’m not sure what I am going to do.

On a postcard of New York City:

I am back in New York, in the hospital with hepatitis. None of the doctors believe me when I tell them that I don’t shoot drugs. I don’t know how long I will have to stay, or what I am doing next. Taos? Cambridge? School? Once you have seen God, it is hard to care how you do on a math test.

Write soon. I miss you.
Rachel

Jeanne Holtzman is an aging hippie, writer and women’s health care practitioner, not necessarily in that order. Born in the Bronx, she prolonged her adolescence as long as possible in Vermont, and currently lives with her husband and daughter in Massachusetts. Her writing has appeared or is forthcoming in such publications as The Providence Journal, Writer’s Digest, The First Line, Twilight Times, Flashquake,Salome, Hip Mama, Chick Flicks and The Iconoclast. You may reach Jeanne at J.holtzman@comcast.net.