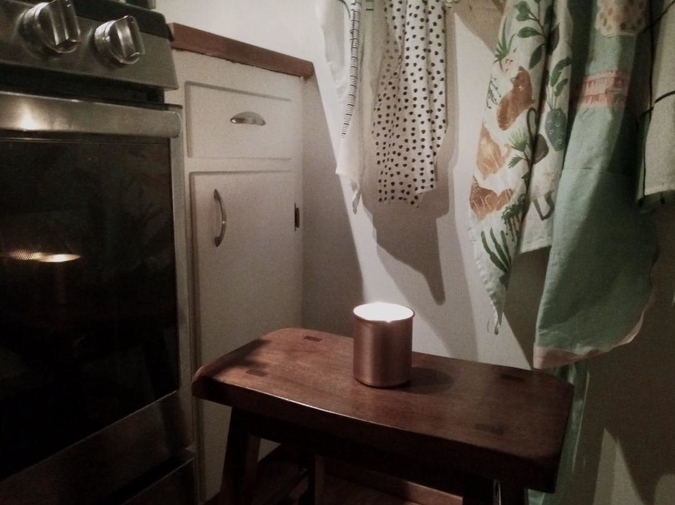 She’s wasting her time painting those, those, I don’t even know what to call them. I mean what even are they? My child could draw that.

Given a glass of wine and the right company, these are the things people in Julie’s suburban neighborhood would say about her art. Predictable, dismissive–like watching clock hands high five themselves again and again. Why do people dislike what they don’t understand? But she doesn’t really understand her paintings, either. She often wonders whether she is, in fact, wasting her time as she brings these works in for school auctions. She has so little time to waste. Sometimes she wishes she didn’t paint at all. It would make it all so much easier.

None of that changes the fact that every morning at 2:05 a.m., like clockwork, she wakes with visions flaring out from her head as it rests on the pillow, and is compelled to rise into the blue-black and paint them. It feels as if she doesn’t paint them she might never feel the companionship of her art again, and for that she’s already so, so lonely. But the visions aren’t the visions she wants. They’re not the ones anyone would want. They’re inelegant, vague, like a stick figure drawn through a waterfall with a blot of orange in its chest.

At three in the morning on a Wednesday, in the broad-ceilinged living room which doubles as her studio, Julie works while her husband and four children sleep. Lit by a duo of bright, incandescent lamps—each poised over a shoulder—she paints brisk, aquamarine lines on acrylic paper, but they’re too maudlin. She’s trying too hard. She’s had no inspiration. She’s bored. She’s considering leafing through an art journal when a figure appears, sitting in the recliner across from her, legs crossed, smiling.

She curses and shields herself with her palette, but stops short of waking the house, because for some reason she knows this is an angel. And his posture, his outline, they’re familiar, like she’s seen him from a distance. Up close he resembles a middle-aged Fellini, clothed in a brown robe, and his face seems calm, pensive. Julie sets down her brush and palette.

The angel nods to a Dali print on the wall. “I remember when Sal did that one,” he says. “Long story, getting him to leave realism. Or was that Pablo?” He gestures toward the laundry room. "Anyways, a question: why is it you have the dryer running?”

He asks the question like maybe he’s wanted to know for some time. For a moment she fears she’s done something eternally wrong. She feels the need to defend herself. “Cheaper electricity at night. And I’m soothed by the noise. It’s, well, kind of like a waterfall. But whatever, I mean, what are you—?”

“You know God’s voice is like the sound of roaring water? Which is to say roaring water sounds like God’s voice? Ezekiel. But I’m not here about that.” The angel shifts in his seat, still examining her with uneven eyes. The dryer turns off prematurely and it’s quiet. He looks to the side for a moment, as if making certain he’s not being overheard. “I’m going to tell you something told to no other human. You know the burning bush, right?”

Julie’s mind flashes to a painting in Dali’s Biblia Sacra – she has prints of the exhibit in a heavy book on the coffee table – and in particular, a human figure being consumed from below by a red slash. She gave up on her dissertation on Dali while pregnant with her second child. “I don’t understand.”

“Everything except God’s words to Moses were my work. The burning bush was me.” He sits back and crosses his arms, as if daring her to argue.

She glances down the hallway towards her kids’ rooms, hoping they don’t wake up. “I need to know what you are doing here.”

He points his finger at a cactus and flames crackle. And like that, the fire stops. “Here I am showing off. What I’m trying to say is the burning bush was an art installation.” She again tries to interrupt, but the angel is insistent, saying he’d staged it in an out-of-the-way locale so no humans would come across it, and a lot of angels showed up (he knew the exact number). But then Moses arrived with his father-in-law’s sheep and God’s voice rang out from the bush.

“It was so unexpected,” he says, eyes vacant, as if he’s remembering a disappointment. “Not that I’m not grateful for the added attention. And it’s more than an honor. But back to the bush. I used these special flames that if you looked closely you’d find were actually made of little peaches. Took me forever to make. They were meant—okay I’ll be honest—to impress another angel. But God chose them for other purposes. You get what I’m trying to say? I hate being obvious. It’s so boring.”

Before she can respond, the angel squints at the Dali print and snaps his fingers. The hands of a timepiece in the painting begin moving like oil through water. He snaps his fingers again and the clock stops. “Hmm. That’s actually an improvement. I’ll ask Sal if he’d consider altering the time. You know artists get to edit their work after they die—”

Julie shushes him, holding out her hand. She heard something from one of the kids’ rooms, maybe a cough. She peers down the hallway. It’s quiet. She turns back to the angel, ready to ask him whether he’s the one giving her the visions, what he thinks of her paintings, what God thinks of them, what purpose they serve, whether she’s a color in God’s palette or something, and if so which one, and why — so, so many questions whose answers might bring a measure of peace to her life.

But he’s gone. The dryer starts up again. Julie waits for a few minutes, hoping he’ll reappear, but he doesn’t. When she finishes, she realizes the portrait is not much different than the other ones, but to her eye it’s more tight, energetic. She feels satisfied but lonely. She wishes she could see the angel again. She wants to ask him whether he can only make fires, and whether the fires make him feel less alone, or the opposite. She wants to know who the figure in her paintings is, and understand the dash of orange.

But the clock ticks like oil through water and soon her children wake up. They yawn and stretch as she shows the painting to them, like every morning. She pours them Cheerios and milk. She’s in love with them. Soon her husband is up and she shows him. He’s encouraging to the point of being insincere, so she lets him make his own breakfast, a minor slight to season a marriage. She loves him, too. And she lets them all talk while she listens.

And her day, like most of her days, is filled with PTA meetings and grocery shopping and picking up the kids and dropping them off (with snacks and water bottles) and walking the dog and Facebook. Through it all, it’s like she’s holding her breath, waiting. And as the day grows into evening, she thinks less and less about the angel, her art, Dali — they fade like steam rising from the broccoli she cooks for dinner, like smoke from the brush fire on the news, which might be, she thinks, the angel’s work, with everyone struggling to put it out.

And like every night, before she falls asleep, she takes a shower. Inside, as the hot water peppers her hair and body, something takes hold of her, and fury pours out, like lava into the ocean. No one can hear her mutter and spit with the steady roar of the shower. Each night this happens. Each night, like clockwork.