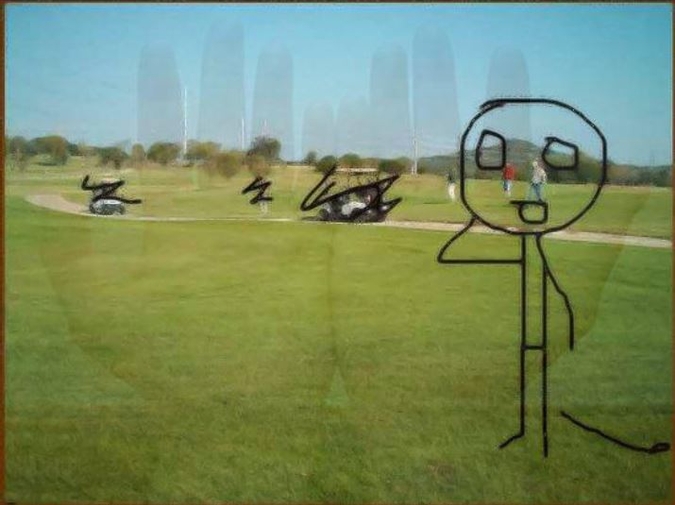 This place is a real gem. Just imagine the scene: The Buckhorn Golf Course opens up before you, revealing layer upon layer of green space – caddies scamper and prance hither and thither like little faeries or gnomes, while smartly dressed men and women hover over them swinging clubs and, through casual chats and quibbles, slowly unravel all the world’s problems in a dreamy state somewhere between the sublime and the pacific, while the dark shadow sharpens its teeth and stalks the land in a lumbering and heaving search for prey. Now, don't get me wrong, there's no monster here. That's ridiculous. And there's no loosed zoo animal or rabid dog. The dark shadow that stalks players and staff alike is not a chimera or mythical beast, but simply a kind of enduring guilt and remorse, the kind that catches you just at the most mundane of moments. You might be listening to your best friend talk about dinner or his kids or some television show, when suddenly you feel it – nothing big, nothing painful, just the intense and pure realization that none of this is happening and still all of it is awful. Then back to the game! Or you might be watching a ball float off in a long arc, passing by the sun into the distance, and as you admire it, the feeling might come over you that, shit, I could just smash my face with this club and nothing would change, not the whole swirling universe and all of the cosmos, sure, but really in the end, not my family or my small little world, nothing at all would really change if I too just flew off in some pointless arc to nowhere, hole in one, eagle, bogey, whatever, and really, that's what's already happening, there's no reason to speculate, you are that ball, you are flying away, you are headed ultimately into some random green expanse at the center of which is a shallow hole where you will be dropped and forgotten. Sure, that happens sometimes, but really, the rest of the time, this is just a fantastic golf course, and the challenge level is good for both beginners and experts. Also, it's so beautiful, especially in the Spring.

Dolan Morgan is the author of That's When the Knives Come Down (2014) and an editor for The Atlas Review. Find his work in The Believer, Field, PANK, The Collagist, and elsewhere.