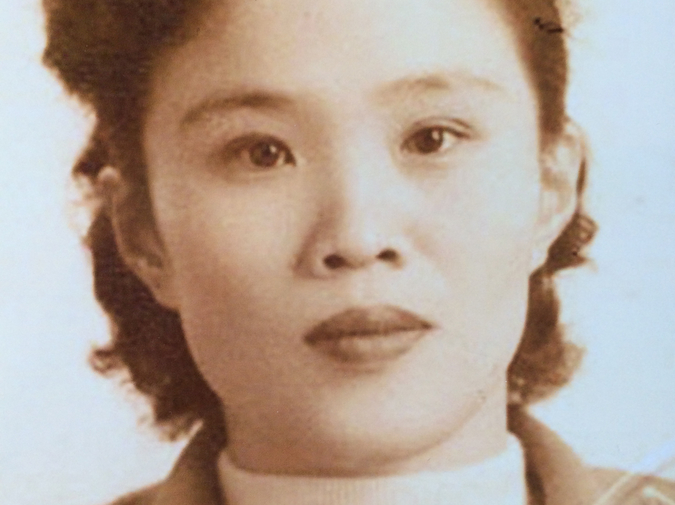 The Class of 1953 Tachikawa Air Base Bride School girls were fertile, well-fed and rested. The Red Cross had a full curriculum to ready them for American life, and the girls attended Bride Class on Tuesdays and Thursdays, wore clean Western-style dresses with full skirts and crisp crinolines and shoes with funny heels. Kitten heels, they were called. Kitten, child cat, koneko. This made the Brides giggle. How silly. One girl, Fumiko, reddened. In order to survive, her family had boiled her kitten. At the end of the war, her town of Tachiarai, home to the Imperial Japanese Army flight school, had been firebombed. There was no food. It had to be done. Her little brothers couldn’t go hungry. This was also why she married Sgt. Dale.

The Brides would gather together and give each other permanents, one holding the Handy Hannah hair dryer for the other, until all the hairstyles matched—black, loose curls, most to the nape of the neck, pulled back with barrettes on either side. Eyeliner. Cream blush. Fleur de Paris perfume. They learned English slang together—nifty—and they learned American recipes together. Mineko’s Jell-O mold with canned mandarins wiggled with orange delight. The color reminded her of her favorite coat, which reminded her of the boy she first loved, the boy who had died somewhere over the Sulu Sea. His favorite color was candy orange, bright and cheerful as a sunrise. Even though it hurt her, Mineko still made the Jell-O because her new husband liked it very much so.

The Bride School girls were from all over Japan. The Bride School girls all hoarded food. The Bride School girls all had nightmares. They all flipped through movie star magazines. They walked their children home through the base lanes from school. They tried to understand the Bible. Many Bride School girls had been baptized, sprinkled with water—water!—by a chaplain. The Church Girls were nice and met often, a group within a group. They learned English a little faster, perhaps. Their husbands seemed a little more lenient, maybe more understanding. Thus, Akemi had wondered if this Jesus really did help people out. That’s why she kept the King James Holy Bible out on the table. Maybe Jesus would float from it and make her love her husband, make this marriage worth being shunned by her family, who steamed open the envelopes, removed the cash, and then returned all her letters, the sharp crease still in place, the words unread.

Akemi imagined Jesus from the color plate at the beginning of the Bible, his milky face, his inari age colored beard, his blue eyes, although based on what she understood, that couldn’t be accurate. Akemi mentioned this to the other Church Girls and had been stared at, tsk-tsked. That’s when she stopped hanging out with the Church Girls. But, still she kept Jesus around. Couldn’t hurt. Might help.

Occasionally, new girls joined the Bride School Class later in the semester. Kiyo had just married an American soldier and moved to the base. She was also no more than fifteen, but said she was eighteen, and was melon-bellied already. Some Bride School girls were cruel to the new ones, for no reason except that they were new. Oh, these halfie American babies of ours, their heads are so big, they’ll rip you in two. The doctor will have to stitch you up, Kiyo. Make sure you don’t get Dr. Snow, little sister, he’ll sew you so tight, only your husband will like it. But Kiyo was not scared off by such talk. She sprinkled greasy potato chip crumbs on her tuna casserole and smiled and nodded, politely. Kiyo promised her mother that she was moving to America and was going to be a better American than the Americans already there. Then she’d move everyone to Hollywood and feed them salmon, no more boiled acorns. Just wait and see. Still, she stayed away from Dr. Snow.

When a Bride prepared to leave, there would be a pot-luck party at the community center. There would be a pastel-hued punch, which would later be spiked by the men. Some Brides drank too much “after ten o’clock punch” and ended up sitting on the playground swing sets together, sobbing. Some would wander the lanes, lost in conversation with a friend from the same town or, at the very least, the same prefecture. Promises would be made—rice crackers sent monthly, letters every week. It made leaving a bit easier, these late night vows.

The night of Yoshiko’s going away bash, she didn’t touch the punch, but the other Brides did. They giggled and tumbled after each other, away from the well-lit housing block, the husbands smoking and playing cards outside the community center. At the playground, Yoshiko climbed the ladder to the slide. Around her, the Brides had burst into a drunken song, Aoi Sanmyaku. “Goodbye with a sad dream, birds sing for a traveling girl who longs for blue mountains and rosy clouds.” Yoshiko began to sing along, and she had a good voice, although none of the Brides knew this. How had they missed this about her? They all stopped singing and listened to Yoshiko, crooning atop the slide in her best dress, the new moon poised behind her head. The Brides let her voice move through them and they knew she was singing of blue mountains but thinking of the brown flatness that awaited her in an Oklahoma oil town so far away, she would not leave it until her hair turned gray.

The Brides grew old in new places. They left gangplanks and jet bridges, wearing white gloves, pearls in their ears and three strands of good pearls packed secretly in their luggage, one to wear and two to sell, just in case. You’re in the enemy’s mouth, the belly is next, Chiyo’s sister said when she called home for the first time, a complaint on her lips. Well, maybe I’ll come out the other end, she said angrily, hanging up with such force, the phone made a series of pained ringing noises. Chiyo was in the center of the country, indeed its stomach, working her husband’s sugar beet farm, her hands always cold, no need for eyeliner or to say “this dance is neat-o” because there was no dance. Chiyo wrote letters to the other Brides. Tell me, are you happy? Then she walked the long path to the mailbox month after month, hungry for the familiar, the metal tube always empty, until one day she stopped waiting and let this land swallow her whole.

Amanda Churchill is a writer living in Texas and a 2021 Writers League of Texas Fellow. Her work has been featured in Witness, River Styx, among others. She holds a Master of Arts in Creative Writing from the University of North Texas. She’s revising her first novel, a work inspired by the life of her Japanese grandmother, that focuses on the recreation of home and self in a new country. Follow her @agchurchill on Twitter and @amandagchurchill on Instagram.

image: Photo via the author