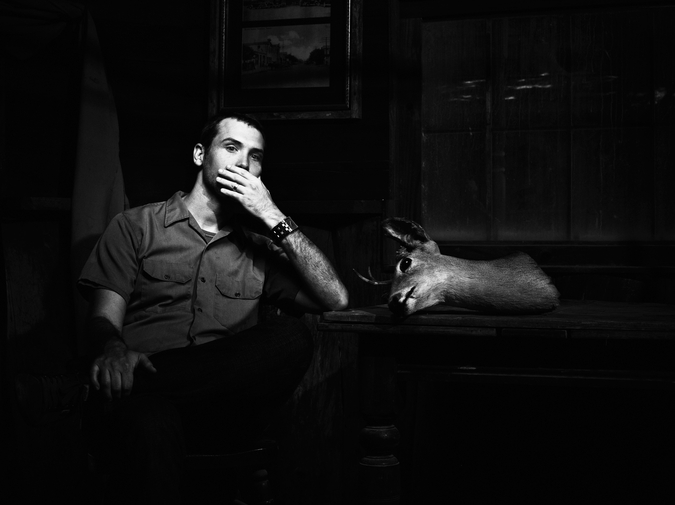 Sean Kilpatrick: If you and I could be said to exist outside ye old literary camps, and I think our flags remain hygienic because I don’t leave the house and you’re too good at what you do, also it’s difficult for me to address anything particular: where physically is the contingent for sugar acting like they count inside a sentence? Because I need them to give me a job. Aren’t there maybe four current writers tooling outside their life that any larger press has scoped? Is it by general overabundance of lactate we seem to possess numbers? What is the tension of how truth might oppose sound in writing and where is the source of its insolence? Have you ever been openly mocked by dandies? I’m excluding poets. They don’t matter. Lish’s school’s got sentence torque, but my impression is he favors life and truth over abstraction and will piss in a poet’s eye (as he should). But what do the uniforms look like and can’t ours just be blood?

Brian Allen Carr: We can surely dress in blood uniforms, I'd be down for that.

I'm not sure that there is an opposition. I mean truth doesn't have to get in the way of sound and sound is actually a great vehicle for truth. I guess where it gets dicey is, it seems, the harder sound is pressed forward, the further truth sinks and thus has to be dug out. Right, the thicker the frosting, the deeper the cake. So what do you want? To sit back and marvel at the sugar? On the other side of the spectrum, to stare at the naked truth? So you have people who strive for nudity vs. people who aim for flourish. I'm of the opinion that both are necessary, but at their time.

Picking a side is about the same: wanna be naked or wear clothes? Well that all fucking depends.

SK: I only posit with my cup on, but would you agree we are similar in our sense for extremity inasmuch as, tell me if this a flat analogy: I doodle at the subject of love by writing hatefully, your subject is, or one of them is, would you agree, death, and that you go about it unhidden, through your balls, at life itself? I wouldn’t call anything I’ve done fiction or any life I’ve led a life. What do you take away from being alive? Is experience part of the unteachable ingredient for something to possibly last? By lasting I mean would you say, or do you feel closer to, a literary canon by how you write as opposed to any purple prose that obscures itself?

BAC: I definitely fixate on death. It's my thing, sadly, and, yeah my life informs my fixation. Some part of writing books comes from other books, some comes from experience. I don't know that I work toward any kind of canon based on subject matter, because so many of the books I love and try to emulate operate with different aesthetics and focuses. I guess that's the real thing of it: to some extent we get to choose the books we let influence us, but we aren't always lucky with regards to life experiences. I mean, who hasn't at some point in their life felt silly that their emotions were steering them. We all get to a point where we say, "I don't want to feel like this." I suppose to some extent this is true with art. Tolstoy said that art is "one man consciously, by means of certain external signs, hand[ing] on to others feelings he has lived through, and that other people are infected by these feelings and also experience them." So, if it is, after all, an emotional experience, we are with art in the same quandary as with life—that is to say that in so many ways it is out of our control. If experience is an unteachable ingredient, I'm not sure. Also, some lessons shouldn't have to be learned by anyone.

SK: Those too abstracted by their clothes end up ballooning diabetic, or worse yet, are theorists. Maybe too much striving for nude truth leads to cliché, or worse yet, to politicians. Both feel like enemies of the book. To what extent would you say writing is lose/lose?

BAC: Anything done exceptionally results in cliché. Once upon a time, a hamburger was a novelty—now it’s fucking America. Isn’t the Blues a kind of joke these days? Tom Williams’ recent Don’t Start me Talkin’ meditates on that question beautifully. Um. . . in terms of politicians: it’s all political if we want it to be.

But I don’t know that the book has any enemies other than certainty. Certainty needs no information, seeks to posit no questions. The lose/lose might be this: fiction is a metaphorical answer to a somewhat unpolished question, I think. There’s a phantom itch fiction is mentally trying to scratch. Even if it gets it, the itch moves along, finds some other uncertain location to pester from.

SK: When you’re alone in a crowded area, what is your process for moving through motherfuckers? Are the people where you live ever hostile without provocation, or is this less (or more) of an issue because of the population size? What is it with men in a bar who mind your business enough that they need to be hurt? Those who initiate. Is it some form of attention or misplaced hugging? Is it more of a sport to cure boredom?

BAC: I don’t know, I guess I’m pretty happy anywhere I am. Where I live, there’s very little random violence. There’s a drug war seeping in, so people don’t think violence is cute. If you get in a bar fight here, you’re likely to be food for Mexican pigs on the quick. So people mind their shit, unless they’re serious.

I don’t know. Violence is definitely a natural thing. It’s definitely an option God gave us. My daughter clenches her fists when she gets mad. No one taught her that.

I think fighting can be a less than violent thing, if that’s what you mean by “misplaced hugging.” I’ve hit dudes I love. My buddy Clayton and I used to get drunk and beat the shit out of each other. I’ve got a scar on the back of my head my brother gave me before he died. My wife has hit me a few times: not in a battering kind of way, just a good stick here and there.

But fighting isn’t a type of killing the way a blow job is a type of sex. So, yeah, maybe sport.

SK: Do you possess an impression of our era, for or against?

BAC: It’s good enough for me.

SK: How complicit do you like to feel while reading? I’m thinking of when the narration directly has the reader complicit against a baby in Motherfucking Sharks. What is a book or film that gave you the best feeling of complicity?

BAC: I used to really enjoy choose your own adventure novels as a kid, so that’s a kind of book where the reader is complicit in an obvious way, but readers are always complicit. I mean, stated or unstated, it’s just the nature of it. “If you believe [me], clap your hands!”

BAC: My favorite western is My Name is Nobody. My favorite horror film is Maximum Overdrive.

SK: What’s a line from a song that inspired you as a kid?

SK: “…instruments the mouth of the world uses to chew its prey.” What is the worst physical pain you can remember?

BAC: Nothing has ever hurt me ever.