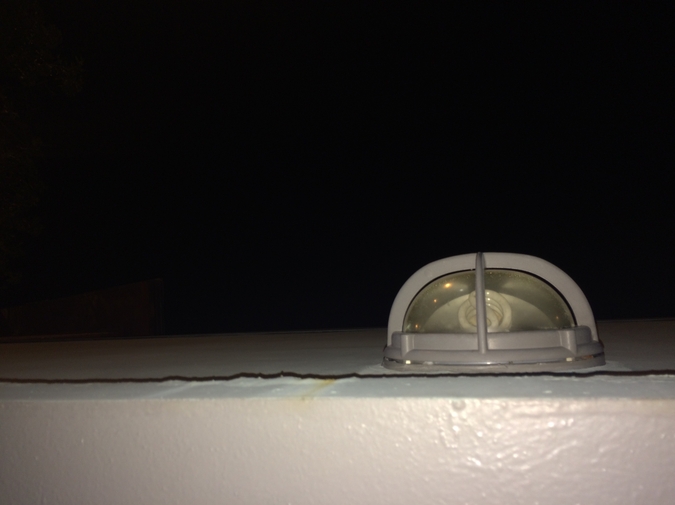 “And no one knows in what guise the end of the familiar will arrive.”- Joy Williams, “Cats and Dogs”

Dale-Anne has heard a noise in her backyard, loud enough to pull her up from sleep. The pieces of whatever it was she was dreaming vaporize, flee from her like deer at the sound of a spent bullet. She stays silent and still in her bed, waiting to hear the noise again. When she does—it is an unkind thud, she thinks; a hushed voice, though she couldn’t swear to it—she hesitates briefly and then phones the police. It is not in her nature to ascribe to the harmless a sense of the sinister, so that she has the inclination to call the police—to designate this as an emergency—is reason enough to do so, it being so unlike her to think something is awry, to feel as though she may be the victim of some mischief.

This is in Eureka, Nevada, the place Dale-Anne was born and still lives. If you believe the sign posted when you enter, it is the friendliest town on the loneliest road in America, the road being U.S. Route 50. Dale-Anne has never had reason to disbelieve this characterization. But she had heard the noise.

She waits for the police to arrive, already feeling a little foolish, already regretting calling them at such an hour. And what will they think of her if they find nothing at all but a middle aged woman, frightened in her nightgown? Probably they will think her mad. She has not heard the noise since the second time.

It is just Dale-Anne in the two-bedroom house—the other bedroom is empty and she sleeps alone in hers—though it has only been this way for a short time, or however long it turns out two years really is in the end, something she can’t know until she gets there.

There had been a husband and a child; her husband and her child. Dale-Anne still sleeps on the side of the bed she’d slept on when she was married, facing the wall—either so as not to acknowledge the empty half or because she is simply more comfortable on this side, something which had not changed after the divorce. Eureka is small and she sometimes sees her ex-husband at the bank or the grocery store. These encounters are neither pleasant nor uncomfortable; they are brief and polite, as though they are old classmates from high school bumping into one another, which, in a technical sense, they are. Only once has she happened upon him with the new woman in his life. This was at the post office last week. Her ex-husband had not introduced Dale-Anne as his former wife, just as Dale-Anne, though she was quite sure the woman knew who it was she was meeting. The woman was several years younger than Dale-Anne, tall and thin as tracing paper, but it appeared she suffered from that unfortunate skin disorder—vitiligo, Dale-Anne later remembered it was called—where it looks as though someone has attempted and failed to erase your face, leaving you unevenly pigmented. Dale Anne had tried not to stare and had tried not to feel satisfied by the woman’s condition, but had succeeded at neither.

The other bedroom in the house is empty because, the year before the divorce, their daughter had been on spring break, in Brazil, and had made a misjudgment when diving from a cliff in Chapada Diamantina.

After the accident, after the divorce, Dale-Anne felt as though she had been handed over the second half of her life like an unused roll of film she never expected she’d have the chance to shoot with. Her life, once so concrete and arranged, instantly became one of invisible architecture; one she is still learning, two years later, how to move around inside.

The police arrive, two officers who appear unconcerned. They look around in the backyard diligently, shining their flashlights into the trees and behind bushes. They say they’re happy to report nothing in their findings that suggests any foul play has transpired. No signs of attempted break-in. Not so much as a trashcan upturned by a raccoon seeking leftovers. “Ma’am, is it company that you want?” one of them asks.

She asks them to please leave, which they do.

So it turns out to be an uneventful night for Dale-Anne after all, hardly a story worth telling. But she has two days before she makes the three-hour drive to Winnemucca; two full days before her weekly visit to the continuing care facility where they keep her daughter, her Catherine, quiet and lovely, an incorrupt saint, in the room with all the machines to which her bodily functions have been outsourced. Two days is plenty of time to rewrite the story; Dale-Anne will sharpen its edges and file down its dullness. She will make it a malicious thief that ran in fear when she busted out of the back door, Louisville Slugger in hand. When she tells it to Catherine, Dale Anne will be the unsuspecting hero of the story, bravely putting an end to something that otherwise could have ended terribly.

She takes a sleeping pill and puts herself back to bed, only a little stunned.

A few months after her daughter’s accident, Dale-Anne had often found herself on a terrible train of thought: wishing her daughter would not have survived the accident rather than having survived it in the way she had, which was to say not exactly. This way Dale-Anne could go on loving her daughter without the love ever feeling false or obligatory or performed for an unresponsive audience. She didn’t wish this at all, of course, not really, but still the thought came and went, persistent and uninvited as a migraine, as a gnat. It was nothing she ever said to her ex husband, nothing she has ever said to anyone; it’s been so long since it has even crossed her mind. And yet it does now, as she tries to fall asleep, thinking the improbable and imprecise thought that it was that idea, that ugly idea of hers, come to return to her in the night.

And how does one lock that out?

Vincent Scarpa is a writer, critic, and instructor based in New Jersey. He received his MFA in Fiction from the Michener Center for Writers, and his work has appeared in various journals and magazines, including StoryQuarterly, Indiana Review, and Electric Literature. He can be found at www.vincentscarpa.com and on Twitter at @vincentscarpa.