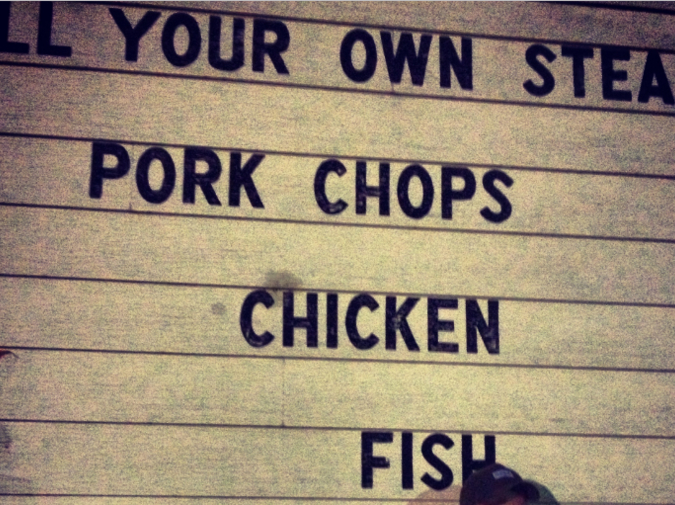 Andre the Giant once drank sixteen bottles of red wine and then wrestled twenty men at once, and won. Well it’s all staged, but he was victorious nonetheless.

I got a flat tire last month and my life spiraled out of control just a half mile from the rest stop. I stood on the side of the turnpike totally defeated, no idea how to get the tire off.

I started pulling random things out of the trunk; a big white frame; a box of used books I was supposed to drop off at the shelter; Tracy’s travel suitcase bursting with nail polish, tooth picks, her yellow sundress. When the cop pulled up behind me he was laughing because I was trying to loosen the lug nuts with one of Tracey’s purple flip flops.

He stopped laughing when I began to cry.

One time Andre the Giant went to the bar in the lobby of a hotel. He drank 156 cans of beer and then passed out. The staff of the hotel, all of them working as a great force of army ants, couldn’t move Andre back up to his room so instead they put a piano cover over him and let him sleep down in the lobby bar, undetected. Everyone thought he was a piano.

I tried to convince the cop to help me push my car to the rest stop because the tow bill would crush my wife and I. But the look on his face became even more worrisome, as if he was morphing into an agent of total evil. Sprouting wings, tar black and glimmering in the emergency sun.

“You can’t push a car with a flat tire. The distance is too far anyway. What’s wrong with you?”

I blurted out, “Four guys were messing with Andre the Giant in this restaurant, saying cruel things and finally he got mad and chased the men out into the parking lot. They locked themselves in their car and do you know what Andre the Giant did?”

The tears streamed down my face and the cop reached for his gun. Or his radio. Or was just scratching his leg. “I don’t care what Andre the Giant did, get back in your car … have a seat. Leave the suitcase. Leave the flip flops.”

“Andre the Giant flipped the car!” I shouted. “And he could also pick up Arnold Schwarzenegger with one hand!”

An ambulance came for me. The EMTs towered over my little interrupted life, their shadows obliterating me. I kept my arms at my sides and didn’t move. Like a fragile baby bird fallen out of a tree, I was picked up gently and placed on a stretcher.

To avoid a critical injury from a bodyslam, a person spreads their body out so the impact is dispersed evenly through the body. I did the same thing when they lowered me onto the stretcher.

Me and the car were separated into the vastness of where sick things go off to be sick and out of sight.

The car was fixed easily enough. I was fixed too. I stayed in a bed for two nights in the emergency room’s psych ward and Tracey came and stayed there with me as long as the nurses and doctors would let her.

“What happened?” she whispered when my terror finally subsided enough that I could blink.

She sat at the edge the bed. The crown of her head looked to me then like it was scraping the popcorn ceiling.

I was shrinking even further. My fingers so thin the rings slipped off and rolled across the floor of the hospital and down a storm drain that wasn’t even there.

Heard the sounds of the announcers hyping up the main event to come, but blinked and it was just an orderly pushing an empty wheelchair down the hallway, talking to himself because no one else cared.

I pushed Tracey’s massive hand away from mine.

I said, “Tracey! Are you fucking Andre the Giant?”

“What, baby?” Tracey extended her arm to touch me, but I was able to roll and squirrel away in the wrestling ring of the bed.

An hour later she came back with four things: a newspaper with the day’s date, May 23, 2016; a printout of an obituary for the man himself, André René Roussimoff, who’d died on January 27, 1993 in Paris, France; and finally, a turkey sandwich that was dry and salty but washed down with a flood of relief. Orange juice that Tracey had brought from our house. Squeezed from a tree she’d planted for me on our third anniversary, coincidentally Wrestlemania XXIX. So much pulp you almost had to chew.

To kick off the night, Andre the Giant would drink three cases of beer, eat a couple lobsters—count them on your fingers—1-2-3-4-5 steaks. This would all be washed down with an entire bottle of Jack Daniel’s.

When the night nurse insisted it was time to end the visit, Tracey kissed my eyelids. The tranquilizers let me sleep for the first time in almost a week.

It’s like a great black tarp spread across my senses.

No music tonight, come back this weekend.

The next time I see my wife, she is five foot four again and I am five foot three and one hundred and twenty pounds. I eat an apple and pretend it’s an entire Thanksgiving banquet. My stomach can’t handle much.

Peanut butter and olive oil in everything I can manage, the nutritionist suggests.

“Who do you really want to be?” the lead doc coaxes.

“I’m not sure if I want to be superhuman or just to understand what it means to be human in my own body.”

I am released tenderly back out into the unchoreographed world.

A few days later, we were walking along the side of the turnpike, searching the cattails, kudzu, astor, thistle for the place where I’d abandoned her possessions in my state of emergency.

It felt like a lost cause, that walk, the traffic whipping by as we moved forward. Humidity. Sweat soaking through our clothes as we hold hands and fight, locked in a death grip.

“Oh there!” Tracey said, walking into the trash-strewn vegetation. There was her yellow sundress, hanging almost vertical in tall grass. I was worried her feet would be pierced by thorns. But she came out just fine.

Over our shoulder there was a whoop whoop and we turned to see the cop climbing out of his car.

“Looking for something we lost,” Tracey said.

My mouth was clamped shut, but the cop recognized me without a word, and he looked happy about it. “Andre!”

I shook his hand, and he waved us over to the police cruiser. A flick of the wrist, a twist of a key, and the trunk of the cop car popped open.

He pulled the big white frame out of the trunk and handed it back over to us.

“Sorry though, my dog ate the flip flops.”

As big as he was, if Andre the Giant liked someone he called them Boss. I am trying to expand in any way I can. I am taking in all the air from the world and filing the flat tire back up.

Tracey’s foot pushes down the pedal. We are in her pickup truck, and it has stopped raining. She has on the red flip flops I bought her to say sorry.

On our way to the party, we stop at the liquor store. She waits in the truck as I jump down from the passenger side, sneakers slapping the asphalt. I enter the store and grab a six pack of wine coolers for my mother.

On my tippy toes, I lean on the counter, elbows splayed out. "Need a recommendation," I say to the clerk.

“Who doesn’t,” he says, and I see how drunk and weak he is in his collared shirt. Hands shaking on the lottery machine.

With confidence I say, “What's the best wine for a guy who wants to drink 17 bottles tonight, then fight 21 men?”

It's a mixed batch. Clementine. Raspberry. Blueberry. Blackberry. When he scans the wine coolers there’s a happy beep from the register. Instead of change, I take two scratch off lottery tickets and leave the other coins in the jar with the cancer cats, the leukemia kittens, the poor little things, only shrinking further without my help.