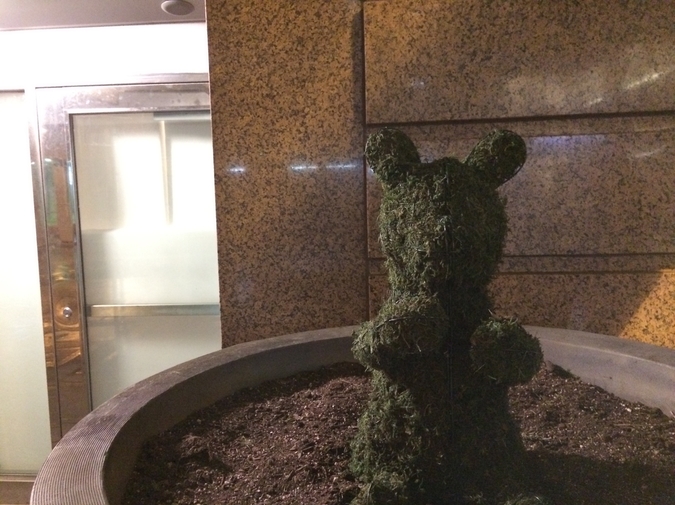 My son’s first word was “panda;” his first sentence: “Look at the bear.” “Panda” was recognizable if a little drawn out, the syllables broken in the wrong place. Paaaaa-nduh. “Look at the bear” sounded more like “lookadubba,” so it took me a minute to decode, especially because he said it while pointing at an illustration of a stuffed kangaroo.

My first reaction to each was pride. He’d said the word at ten months, the sentence at fifteen, neither with any prompting from either my wife or myself. There had been many other words in the months between, some to be expected ─ daddy, mommy, yes, no, hurt ─ others, like hedgehog, helicopter, jaguar, leviathan, a little more of a surprise. But as I closed the book I’d been reading him, the one with the kangaroo, which was actually about various kinds of light ─ streetlamps, lightning bugs, lightning itself ─ I realized that my son’s vocabulary, though impressive, would not help much with anything he was likely to encounter in everyday life, now or in the future.

As I lowered his warm, sleeping body into the crib, I considered how few of the things we’d been reading about, mostly from books my own father and mother had read to me, I’d ever seen in person. I have never, for example, laid eyes on a giant panda. Having only known them through pictures, I don’t have a good idea of a panda’s size. Are they larger, on average, than the bigger dogs? Take St. Bernards. You don’t see them often, either, and never with small rum barrels hanging from their necks, though children’s books depict St. Bernards frequently, and always with the barrel. How many animals in a common alphabetical bestiary had I personally encountered? Camels and elephants and orangutans, yes, but only on trips to the zoo. I doubt I know a single person who has swum with a narwhal or petted a yak. All this is to say nothing of the sentient train engines; the sentient cabooses that use their brakes on steep mountains to save non-sentient engines. I don’t even know if trains have cabooses anymore. I doubt that there ever was, but I know that there never will be another train that, smiling, says, “Chugga-chugga-choo-choo.”

By the time I climbed into bed beside my already-sleeping wife, I was deep into wondering whether the disconnect between what children’s books had led me to expect and what life turned out to be might be at the root of the sense of disappointment that nags at me, as it seems to nag at everyone I come across, whenever I’m not simply crushed under the weight of an overwhelming sadness.

I lay on my back staring up at the ceiling fan and remembered that the fan had been my son’s first friend, remembered how he’d giggled and babbled as the fan spun, blowing its cool air down on him during that first hot summer of his life. Except for his milkings, they were the purest, most joyful interactions I had ever witnessed. It gave me an idea for how I would revolutionize children’s stories, childhood in general, and, by extension, adult life.

At the office this morning I looked around for subjects that could serve as the basis for this new form of children’s education. A stapler that does not smile or speak with you, but does, when pressed firmly, make a pleasant clacking sound, ejecting a set of fang-like brackets into a stack of paper unless it’s too thick. A computer that does, in a sense, speak to, if not with, you, though it never says anything you want to hear. A supervisor who speaks with you rather too much, who says everything you want to hear, except that the promotion has come through, that the company is aware that it’s been working you too hard, that it has finally realized that you are no rock from which to squeeze every last drop of blood. A coworker with whom you have not spoken since the office Christmas party when, having had a few too many per, you exchanged some awkward and even painful gropes, of whom you have lived in fear since that day, though the gropes were mutual, consensual, and she is probably as afraid of you as etc.

As the possibilities for imbuing the quotidien with beauty, for my son, for myself, for all people, slipped away, from me, from us, so did my nagging sense of disappointment, making room for the overwhelming feeling of sadness that bore down on me as insistently as the jaundice light from the overhead fluorescents.

Now that I thought about it, my son’s relationship with the fan had not worked out, either. When the weather cooled and we stopped its spinning, he had spent hours, then days, screaming at it, begging it to breathe on him again. Now he never looks at it; he barely ever even looks up.

I placed my forehead on my deskplanner, and tried to weep but could not. I had to stop at the store on the way home.

There is no feeling better than the one you get walking through your front door and, stopping in the vestibule, seeing the outline of your toddler son through the frosted glass of the door to the living room and knowing he is there waiting for you. There is nothing more powerful than the moment you inch open that frosted door and, after hanging up your coat and sliding off your shoes, peek through as your boy’s eyes brighten with tears of happiness, as his mouth spreads into a goofy, gap-toothed smile and he starts to clap his hands, to applaud, for you, for the very fact that you have arrived home at the same time as you always do. There is no warmer sensation than that of lifting his little body and holding him to your chest when he raises his stubby arms to you, fingers outstretched and wriggling. There is no greater joy than to feel his hot breath on your cheek, his bird-like pulse between his temple and yours.

Or so I used to think.

It is so much more powerful to step through the front door and see him through the frosted glass, standing there, waiting. But instead of cracking the door as soon as you’ve hung up your coat, to unpack the box from the costume store as carefully and quietly as possible, to slide the costume over your department store suit while your son tries to figure out what’s going on on the other side of the glass, to pull the massive, surprisingly realistic grizzly bear’s head over your own as your son begins to back away, and, realizing that the paws of your costume will make it impossible to turn the knob, and that to remove your paw, turn the knob, and replace it will ruin the effect, to crash through the frosted glass with a roar you didn’t know you were capable of as your son runs screaming through the house, hitting his pale, smooth head with his tiny, impossibly soft fists and running into furniture, fixtures, walls, until he finally finds his mother’s arms, though the screaming does not cease for a long time after.

The boy is finally asleep, the mess is cleaned up, and my wife is still angry. The costume will go back to the shop tomorrow, and the door is going to be expensive to replace. But this is only the beginning. I’m already thinking about an outfit that will involve a shriner’s cap, a shiny black wig, some swim goggles, a welder’s apron, and a pair of rubber kitchen gloves, probably pink, so that I will not have to shatter glass. Next time, at least.

When I will do it depends on the boy: Does he still believe in Santa Claus? Has he been giggling or groaning in his sleep? When was the last time he waved hello to an inanimate object?

I can’t, and don’t want to, ensure that he won’t know sadness, but he won’t know mine. I’ll be a goddamned unicorn on the first day of school. At his confirmation, I’ll descend from the cathedral’s vaulted ceiling, a stigmatic dove crowned with thorns. I’ll be a dead girl in a letterman’s jacket on prom night. For his wedding reception, I’ll buy jarred fetuses on eBay, arrange them semicircle, and, with a series of electrical pulses, make them perform a graceless and complicated dance.

I love my son with such a deep, dark, ghastly love, that when I die, hopefully when he is much older than I am now, for his sake, not mine, I will haunt him like some specimen from the deepest, most gorgeous pit of hell.

Christian TeBordo is the author of five books. The most recent is Toughlahoma (Rescue Press, Open Prose Series, 2015). He lives with his family in Chicago, where he is Assistant Professor of English and Director of the MFA Program at Roosevelt University.