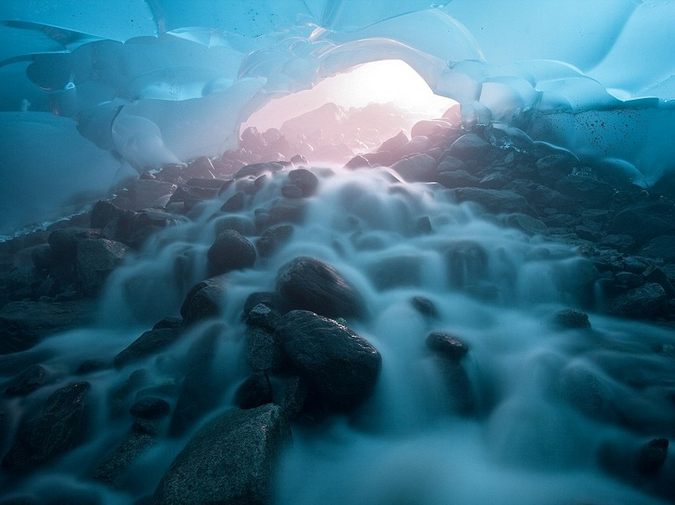 Marla tells me they’re sexual. The thoughts. Small things between us, like glaciers and their alpine unders, but deeply, deeply sexual. She’ll say something like, “All that air and water chilling in a hidden space under there,” moving her hands around me. I never know what she means. For instance, a swift arm to the ceiling may indicate how the movements of stars should, theoretically, trace signals of background radiation onto the palm of a snowfield, leaving monotypes. Or that same motion may indicate how gravity should, theoretically, have a purpose other than confrontation and ultimately, destruction. I could tell you more.

“Well you know what they say about suncups,” she responds, pausing. “One man’s suncup, well,” and I think Gee, Marla’s sure got a strange way of talking about her middle, weighing the benefit of doubt, watching what reality they gave her so quickly unravel into metaphor. Wondering whether or not it’s a shame.

Now, to me, and for a time, these things were small. They had us up nights searching ‘milkbaths’ and ‘cryoclams’ through Earl Grey, dimming the monitor; constructing nouns on nouns, compounds, the first or second parts glacial. We made it an industry. But I still considered it small, like a hobby. It was Our Little Thing. And to tell you the truth we didn’t come up with much.

Then something about a site called batholithcarver.net, which drew up a 404, got Marla’s legs squirming. The suspense was cinematic. The void aligned in her pupils, the tea steeped and cooled. She was certain destiny lie behind that error message, taunting. But as with all the others, typing and retyping, we lost the trail. Another barricade.

Instead we kept running into the same empirical walls. Encyclopedias, databases. One website explained how The belly of the beast sublimates under a pressure all its own, slying away from its grade. This was flowery but altogether too rational for her. Another website remarked how even the flame honors gravity as it tames the fuel, which, although irrelevant, still managed to infuriate her. “This is all just science,” she said. She had grown impossible.

Anyone could see Marla taking stabs at a form of communication, the language nearing but never held. She had a thing in her that wouldn’t stop; a knuckle in her abdomen, something demanding Please, please don’t quit. But all we could drum up were images of Snaefellsjokull and Mer de Glace, lifestyle articles on geologists and Ernest Shackleton. “This is not enough,” she said. That’s when we bought the tickets.

When The Guy calls I say something about a rounded lengua boring holes in a batholith, milk gleaking through the cuspids, and so on. After some silence I say, “You’re the one who asked.” I give him a real runaround, a real taste of our reality.

“You sure she’s okay?” he asks. Yes, I say. She’s fine. I don’t tell him how she thinks the milk will cure the erasures, though this I know. I don’t tell him, or her for that matter, how the erasures are on her harmony. What we’re dealing with is a true case of recession. Hairline fractures in psychology. I don’t tell The Guy shit because he hasn’t earned it yet. I also don’t tell him to fuck off, but I want to.

Since Marla’s my mother I can’t help bringing up her ex, The Guy, from time to time. “I can only hold him off for so long, Mar,” I say, and three chips into the dip she lays a left eye closed and yawns, licking my wrist. Forty minutes later my sister is born.

Marla Jr. crests our maiden’s middle and I watch. Event horizon: No going back now, Sis. The Guy is there, too. “Hey, Dad,” I say. He is not the father. Our maiden dilates and then she is flaccid, an absess relieved. She takes one look at Marla Jr. and weeps. She’s been going through a lot lately.

They are crazy. “They see that hair grows, so they say it must be like a plant, like vines. They say that hair is a living thing, for its growth, but they won’t admit their mistake.” We watch the fan turn circles on the ceiling, moving our arms up there, toward it. “I’ve always known it’s more like a galaxy—hair—moving further and further from the planet. Like all galaxies, or all things for that matter, increasing at an increasing rate. Falling away faster and faster.” I am proud to see her getting sane again.

I am proud to see her sounding more like me.

Jacob Perkins is a co-founder of Mellow Pages Library in Brooklyn, where he currently lives. You can find his writing in Hobart 15, SP CE, The Fanzine, Everyday Genius, and Keep This Bag Away From Children among other places. He is 27 years old.