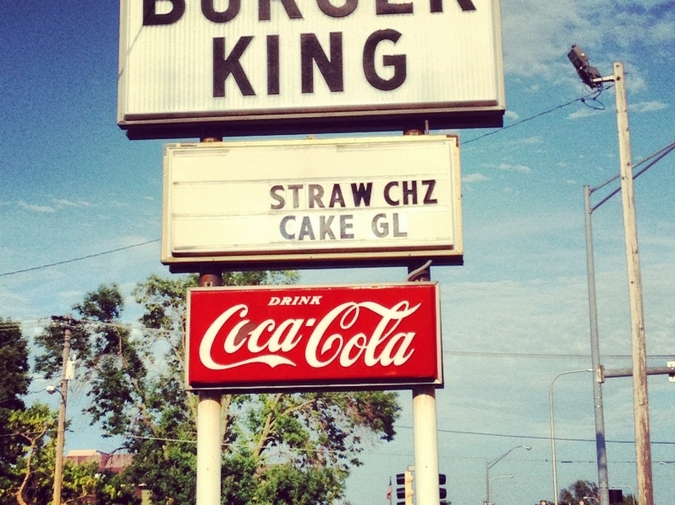 Bad guy has no luck. Here he is walking the aisles of the home and garden center, checking hoses for flexibility, thickness. The fat green one suits him, so does a black soaker hose. So do two circular sprinklers. He piles his arms high. He leaves home and garden, walks past shampoo, hair spray, cat litter, nasal decongestant. He walks through an empty checkout, right past the old man at the door with the coupons and vest full of pins. The old man smiles weakly, waves a veiny hand.

Bad guy is Ted Capricho, age forty. Ted wants to get caught. But as Ted has found out, getting caught is not as easy as it seems.

Two months ago, Ted ran over his neighbor’s seven year old daughter with his SuperCab. This is how it happened: Ted was backing down his driveway, balancing his coffee mug in one hand, steering with the other. But he was watching the mirror carefully, because backing up is when people always hit things. But not this time. Ted was leaving the neighborhood, sipping coffee, thinking about what to eat for lunch, when it happened.  He rushed from the car, kneeled on the blacktop, not believing how little this girl was. She looked so small crouched under the wide chrome grill of Ted’s truck. Her legs were all bone, tendon, skin. One knee was rubbed raw, the other leg was lumpy—something under the skin didn’t sit right.

This was in April. Afterwards came visits at the hospital, cast signing, apologies, Ted standing in the parents’ living room with a card and an arrangement of chocolate glazed strawberries and pineapple chunks.

The mother said, “We’re so blessed.”

The husband said, “This could have been worse.” He looked at Ted with dozy eyes. “We’re not angry. It could have been anybody—some yahoo, you know, running off and leaving her there.” The husband shook his head. The woman covered the husband’s hand with hers. “We’re glad it was you, that’s all. Thank you, Ted.”

Ted waited for the guilt to come on, but it didn’t. Instead he just felt flat, middle-of-nowhere empty. Weeknights he sat in his cloth recliner with the TV on mute. Other times he went to the porch and watched the slate-grey sky creep across the horizon. His wife walked outside. “This is what you’re like, a big blob of grey hanging over this house.” She pointed at the sky. “Pull yourself together.”

On the internet Ted looked up Ten Indicators of Psychopathy and Psychopathic Behavior. Among them: lack of remorse or guilt. Maybe this was him, all along. Bad guy had been hiding in the shadows, planning ambush, waiting on opportunity.

Ted tried bad guy on at the video store. The line was long, wrapping around the popcorn carousel and ending at the ice cream freezer. Ted pulled every copy of the new superhero movie off the shelf, making sure to get both blue ray and regular. He carried them in his arms to the checkout, nudged in front of a mom with whiny kids. Ted unloaded the cases on the counter. Behind him, silence. He turned and looked, but nobody was paying attention. The kids were piling on each other, rocking the popcorn carousel.

Ted shrugged. On the way out, he grabbed a box of sour worms and stuffed them in his pocket.

With June came drought. Ted’s grass shriveled up and turned to onion straws. Walking the lawn felt like stepping on a hot pin cushion. His wife told him he had SAD—seasonal affective disorder.

Ted said, “That’s for winter. This is summer.”

Standing in the driveway, Ted said, “I feel…like that.” He gestured at the yard, the stretch of empty road, the dust-colored horizon.

Bad guy could do better than the video store. He went to Multi-Mart, the luggage aisle, chose a sleek silver hard-case. He walked the suitcase around the store, enjoying the smooth operation, the hydraulic feel. Ted rolled himself to the men’s clothing department. He picked out striped swim trunks, underwear, tube socks, plaid t-shirts, stuffed them inside his luggage and headed for checkout number nine, the only one lit. He lifted the luggage onto the belt, watched the cashier shift it around to find the sales tag.

The cashier said, “This feels heavy.”

The girl gave him dead eyes. Ted cracked open a bag of Funyuns, munched down, breathed Funyun in the girl’s face. The manager showed up, smiled at Ted. “I’m sorry, sir. This happens all the time—some kid probably stuffed those clothes in there and then changed his mind. I’m really sorry for the inconvenience. Go ahead and ring up the suitcase, Linda.”

Today Ted arrives home with the lifted sprinklers and garden hoses, surveys the brown grass and bald patchy dirt. The drought has gotten so bad there are water restrictions—no watering between seven in the morning, seven in the evening. But bad guy doesn’t take no for an answer. He hooks up a latticework of sprinklers. U-joints, T-connectors, fat green tubes crisscross the yard like spider veins. Every ten feet or so, Ted places a sprinkler. He cranks every spigot to high. It’s like the Bellagio fountains, in miniature.

The neighbor walks over. “You know there’s a drought on, right?”

“Are you really…I mean, wouldn’t it be better to wait until seven? What exactly is the set up here anyway?”

“It’s my masterpiece. My gift to nature.”

The fountains run through the night. The next day, Ted notices parts of the lawn have no coverage. He returns to Multi-mart. It’s early. Multi-mart has just opened. Ted picks out a wheelbarrow, wheels it to home and garden, loads it up: three coils of forty foot hose, two coils of twenty-four, valve boxes, flow controllers, stainless riser sprinklers, rotary sprinklers, much more. Self-checkout is empty; the teenage attendant chats up a boy with a lizard tattoo on his forearm. Ted feels hungry and grabs a king size Reece’s off the shelf. As he walks through the glass exit way, the alarm sounds. The robot voice says: step away from the door, an attendant will arrive shortly. Ted lingers; nobody comes. Another shopper scoots by, hears the alarm.

Ted walks to his truck, loads the wheelbarrow, drives home. His wife has his beautiful luggage in the driveway. She’s stuffing it in the trunk of her car. She tells Ted she’ll be at the Blue Spruce Motel when he returns to reality.

Ted completes his irrigation system. He cranks up the pressure, watches the water crest and sparkle, feels the mist against his face.

He can picture it now. He’ll run the sprinklers day and night. The grass will be soggy but it’ll green up. An anonymous phone call will be made to the city’s water department. Multi-Mart will notice the sudden depletion in their stock. The pieces will come together. He can almost hear the distant whine of a siren crawling through the suburbs, to Ted’s house, where the police will cuff him. They’ll take him to some dark room to sweat him out under the hot lamp. Bad guy will extol the misery and evil of the world, the utter pointlessness—but the cops won’t take his bullshit—they’ll wring him out, squeeze him clean, and flush bad guy back into the shadows.

Elliot Sanders lives with his wife and two daughters in rural Missouri, a place with more cows and chickens than people. His fiction can (or will soon) be found at PANK, JMWW, War, Literature & the Arts, Echo Ink Review, Foundling Review, and Bartleby Snopes.