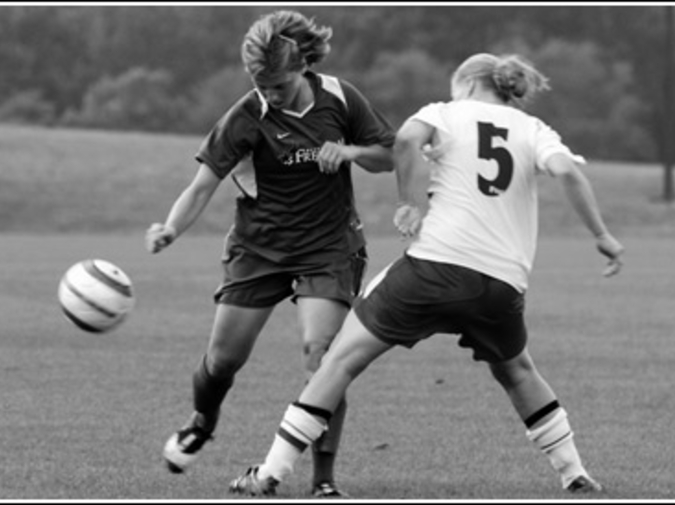 "You played sports?" he asks over dinner. They're having baked chicken and baked potatoes. Clean food is how she thinks of it, only a little butter on the potato and no salt. He's pouring ketchup all over his potato which he's taken out of its foil and diced with a knife. He must be out of hot sauce.

"Yeah, but varsity? I thought you just did, I don't know, intramurals."

"No," she puts her fork down, takes a sip of soda and looks right at him trying to see if he's messing with her.

"Varsity: basketball, softball, track." The conversation started with track. She mostly did field events. She only ran two years in high school because her last year, which was both her junior and senior year, she had to work.

"But you were so scrawny."

She thinks about bussing tables after she stopped running, carting the plastic tub from booth to booth and then to the kitchen, washing the dishes in the bleachy water, closing the restaurant at two a.m. and then getting up the next day at seven for junior history followed by senior English, followed by junior English, followed by algebra, etc. until she was back at the pizza shop at four in jeans that were so greasy they literally stood up by themselves after she took them off each night.

"Yeah, scrawny." She puts a bite of potato in her mouth. It has no flavor. She likes it that way.

After dinner she looks through the unpacked boxes for her high school yearbook. She doesn't find it. Their daughter, Sarah, wants to be a cheerleader. Her husband keeps saying, don't worry, she's four; she'll change her mind. She tells her daughter to play sports instead. She thinks of the hours she spent doing windsprints in the gym, the double headers in the summer. It was important. It made her who she is.

She doesn't find the yearbook. Probably, it was in the attic and he threw it away in the move. She had went ahead in the move, found the apartment, wasn't at the house to supervise, to make sure nothing important was lost.

Right before she falls asleep she remembers her autobiography, a junior English requirement. She wrote hers from the point of view of the house she grew up in. She tried the other way but got so tired of all the "I"s. The directions stipulated there should be pictures, lots of pictures but her parents never took pictures. Most of the pictures in her autobiography were team shots.

A lot of the kids, especially the girls, really knocked themselves out on their autobiographies. This was before scrapbooking but already they were using all the techniques: the scissors that cut patterns, the stickers and special paper. The leaf collection in ninth grade had been the same way with some kids seemingly preparing for years in advance, collecting leaves on vacations.

In the morning, she finds the autobiography, what's left of it, in a large plastic box. To supplement the lack of photos she had taped drawings into the pages of the autobiography as well: charcoal sketches, pencil, pen and ink, along with poems. Some of them are pretty good, she thinks, but they're smudged from lying on top of each other. She threw away the narrative years ago.

The basketball photo is there: eight girls. She wore number 14 that year. She doesn't look that much thinner than the other girls, although she's the shortest. The girl in the middle, she can't remember the girl's name, is incredibly bow-legged, something she never noticed on the court. The other girls are smiling in the picture. One, Pepper, she thinks, even has her mouth open. In the middle is Selma, who used to shove her into lockers. She knows she told him about Selma and the lockers.

She puts the photo on his side of the bed. He won't have any trouble spotting her. She looks exactly the same.

Tiff Holland lives in Round Rock Texas with her husband and daughter. She earned her PhD in creative writing at the Center for Writers at the University of Southern Mississippi. Tiff's poetry and fiction has received two Pushcart Prize nominations and her work has appeared in dozens of literary magazines, e-zines and anthologies most recently in Denver Syntax, Slipstream and Elimae. Her chapbook "Bone In a Tin Funnel" was published this spring by Pudding House Press.