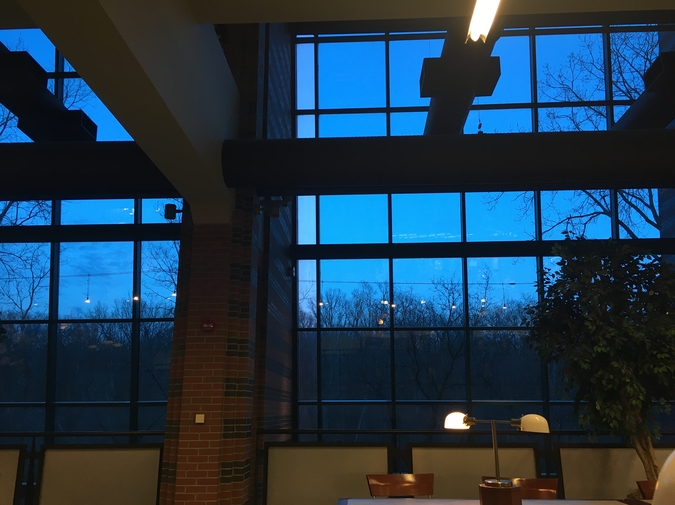 I know that I am going to die. Next week, on the 14th of March, the flickering light of my life will be extinguished as I make my weekly trek to the grocery store. Specifically, I am going to get hit by a mail truck.

It will happen at the intersection of Prairie and Oak, three blocks from this house where I have lived and breathed for thirty-some years. I will bleed out on the street before the ambulance arrives. Traffic stalling down Oak Street for a mile. I am hoping they might, at least, fill in these potholes that crater the road like blackheads, one of which will cause the truck to come careening in my direction.

The person I really feel sorry for is the mailwoman. The mailwoman is a lady named Shirley. She has been my mailwoman for over a decade. Often I am out front seeing to the dog’s needs when she comes by with her bundles of envelopes. There’s no reason it should be this woman who witnesses my final moments. Then again, there’s no reason it shouldn’t. She is as much a part of my life as anyone. She has seen me all these years, more often than not on friendly terms. Though there was the week she started the job, when she delivered my mail to Prairie Street instead of Prairie Avenue. When was that? Fourteen years ago? It was the dead of winter, I remember—fifteen degrees and snow up to my kneecaps at the front door.

Not that it matters anymore.

“You’ll have to take care of the dog,” I tell Sarah, my daughter, over the phone.

“Mom, I’m not entertaining this,” she says. “You’re as healthy as a horse. You’re going to outlive us all.”

My daughter, the faithless one, the optimist.

In the afternoon Deborah comes by for a reading.

“Sorry,” I say. “I’m not seeing anyone until April. I’m tired of the future.”

“My son,” she pleads, “is about to make a huge mistake.” She’s gesticulating wildly, shifting her weight from foot to foot. Standing in my doorway she looks something like an underfed circus bear.

“Fine,” I say. “You can come in. But don’t tell anyone else I let you.” She nods frantically and trails me through the weathered doorway. “I’ll know if you do,” I add for effect.

I’ve known Deborah for a decade now, and I’ve yet to see her in anything but a state of absolute crisis. She’s forty-five and skinny as a lamp, as if eating is just too much of a burden on top of everything else.

Deborah says, “I couldn’t,” and shakes her head.

She seats herself primly at the kitchen table, hands knotted in her lap like a child in church. I put the kettle on while she watches in silence. I bite into a cookie and stare back at her until she averts her gaze.

This job—you see people at their lowest. Divorcées, estranged fathers. People out of work, out of love, out of luck. Everyone wants a little bit of comfort. I always tell them ahead of time, I’m not your therapist and I’m not your mother, but no one really listens. I’ve done this long enough to know that most of the time, everything’s not going to be okay. Your husband is cheating with that little snack down the road. Your job’s a dead-end. You’re not going to make it, not in this precarious life, not in the next. A pregnant woman once broke my favorite coffee mug after I let her know that her unborn son would likely grow up to be a rapist and a murderer. Threw it as hard as she could against the wall.

After they break things, everyone wants their money back. That’s where I draw the line.

The kettle sings and I pour the boiling water over a teaspoon of English Breakfast in an old china cup. The small brown leaves swell and drift in the darkening water before settling to the bottom. This, here, is my favorite part.

I bring the cup with its saucer over to the table and set it in front of Deborah, who eyes it greedily.

“It’s hot,” I warn. She drinks it down like a man lost in the desert, then swirls the remaining debris three times counterclockwise before inverting the cup onto the saucer. The leaves make a muddy pile on the pale blue porcelain. She looks up at me expectantly.

Why does she keep coming here? What does she want me to say?

I glance at the leaves. It doesn’t take long when the question is easy.

I tell her, “Your son’s about to make a huge mistake.”

She hands me sixty dollars. I hold the front door open and wait for her to leave.

Later that night I call my ex-husband from the bedroom we once shared.

“What is it?” His voice is thick with liquor on the other end of the line—though I am not so sober myself. “What’s wrong?”

“Yeah, well. Welcome to the club.”

He pauses. On his end I can hear the sputter of a beer can opening, the TV blaring some sitcom we used to watch together, years ago.

“According to who?” he asks finally.

Another pause. Outside my window I can make out the bulging shadows of forsythia and hyacinths under the soft string lights.

The first of this year’s tulips, their fat heads closed tight against the moonlight.

“You were always like this,” he says. There’s anger in his voice, and something else, too, that I can’t quite place. “From the beginning. I don't know why I didn't see it. Could’ve saved both of us a lot of trouble. No, Annie. I would not like to see you. And when your leaves tell you I’m going to break my ankle, or fall down a well, or eat some bad sushi—don’t call me then, either.”

“I’m sorry,” I say. My voice sounds as if it’s coming from another room, another house, another life. “I’m sorry about everything.”

In terms of my affairs, there is little to take care of. I have this house, which will likely be torn down once I’m gone, the lot on which it stands sold to make way for something more suitable to the increasingly high-rent neighborhood. When Ethan and I first moved here it was Ukrainians on this block, Mexicans on the next. Now it’s—what? Anglo-white, mostly. What bothers me is how young they all are, my new neighbors, and hopeful.

What else? There’s the dog, Turtle, a fat American bulldog who looks more like a cow than anything else. She needs so much, all the time.

I did purchase last month a plane ticket to Acapulco, for May. Sun, I had thought. The kind of heat that turns the volume down on the rest of your life.

Turtle jumps up onto the couch and spreads her lean, muscular torso over my calves like a blanket.

“Crazy lady,” I say. She turns her big square face to me with pleasure.

If I gave the plane ticket to Shirley, would that make things better or worse?

My mother was my age when she died. There are people who would call that fate, but I am not one of them.

Cancer. Two long years. Both breasts lobbed off and no eyelashes to boot.

For once my mother and I would likely agree: my way will be better.

On Sunday Sarah comes over to cook me dinner.

She is cheerful tonight. It’s relentless. She shuffles around the kitchen in her socks, banging pots and pans as if the sound itself might scare away death's hand. The house fills with good smells: cumin, turmeric, cardamom. She was always like this, so different from me.

Always on her feet with somewhere to be, someone new to take care of. Calling me one evening from New Mexico, the next from San José. I never could catch up. Not that I really tried.

“Come sit for a minute,” I call to her from my place on the couch.

“Just a sec.” Her voice in the kitchen sounds bright and tinny, and somehow far away.

There had been a part of me, at some time now past, that had wanted her to know what I knew about the future: the cruelty and blindness of it, and the relief. But by now we have given up on each other, her and me.

Sarah settles down beside me on the couch and rests her dark, curly head against my shoulder.

“Remember when you were a baby?” I say.

“I do.” We sit like that for a minute before I start to cry.

“I thought I would have more time,” I manage to say. “To tidy up the kitchen.”

She shifts away and sits up straight. “Dad told me you called him,” she says. “He said you sounded crazy.”

“Your father,” I say, “never did understand me.”

“Somehow I don’t think that was the issue,” she says. She’s not looking at me but over my shoulder, at a framed print of a large blue whale that I brought home one year, a few months after she was born. I had taken Ethan’s car in the middle of the night, left him with the baby and driven straight northeast to Montreal; fifteen hours on the highway, I-94 to I-69, stopping only to pee and refill on gas and coffee. I stayed drunk in Canada for a month, but all I really remember is the Springsteen tape Ethan had left in the car—speeding to “Atlantic City” with the windows down and Illinois flattening behind me like so many empty sheets of paper. I had called Ethan the next morning from a gas station in Toronto, jazzed up on caffeine and the thought of never, ever coming back.

I said, “I knew that you were going to leave me.”

“God damn it, Annie.” He had been weeping, I think. Or it might have just been the static on the line.

I came back. He left. And what then? Life. My daughter grew up, grew out of needing to forgive me. I saw hurricanes, tornadoes, illnesses before they arrived. The people I lost—I saw them in my windows, in my dreams.

“Was I such a terrible mother?” I ask my daughter now. “Was I, really?”

She takes a moment. “No worse than any other,” she says carefully.

There is, of course, the matter of my soul. I don’t know that I would like to stay in this world so much longer—but I do wish I could look back on my life and say that I have done something other than harm.

My daughter is gone now, leaving no sign that she was ever here at all: not a dirty dish, not an upturned corner of the rug. I put on my slippers and go out through the back, Turtle’s big white paws padding clumsily behind me. I sit on the porch steps, light two cigarettes and smoke them at the same time, like a teenager doing a trick. Like a woman who is about to die.

Everyone thinks that knowing what I know is some kind of curse. But it isn’t. It’s freedom.

From the kitchen there comes the endless hum of the dishwasher. I remember, suddenly, that I have left the empty coffee maker running since morning. In a moment I will go back inside and turn it off. The house will not burn down tonight. All will be well.

Avigayl Sharp is a writer based in Austin, Texas, where she is a fellow at the Michener Center for Writers and a contributing editor at Bat City Review. Her work has previously appeared in New England Review.