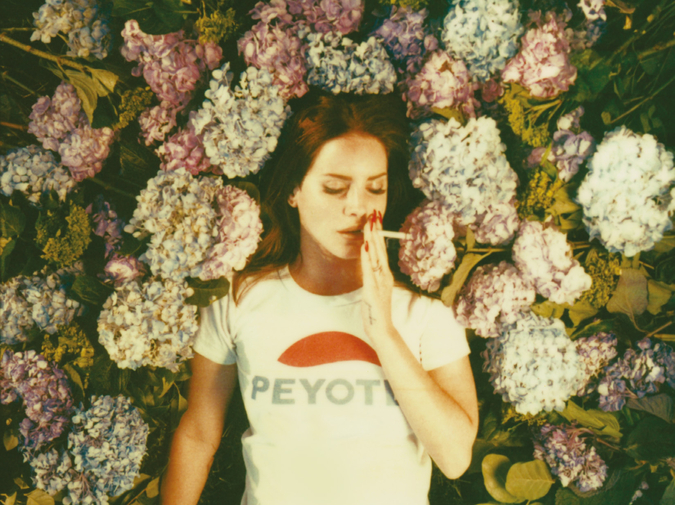 For a little while, in the beginning, it was just you and me in my dorm room with a 40 and a bowl.

A lonely drunken youth fresh out of his teens with a splintered heart sat alone in a cloudy gin joint. A sultry singer rested on an ole grand piano in nothing but silky blue velvet--long lashes resting above sullen eyes masked as promiscuity. "Born to Die" was the tune and I returned to you every night to hear the same set over and over, my eyes widening as you’d strut over toward me, gripping my necktie and shimming down my side.

You held my hand, guiding me to this world as I laid upon my lumpy twin-sized mattress or on those late night lonely walks on campus, and when I sat still dining alone in the cafe. You were the genie living in my tiny pink 8gb iPod. I rubbed my musical lamp, scrolling through countless artists until you appeared sitting right above Langhorne Slim. I plugged you in whenever I desired your presence, because returning to that initial chilling feeling that only an infatuation could cause is one of the most satisfying things.

Our nights together were intimate and endearing. Your sadness was like mine, only yours was paired with an elegant musical score arrangement. I empathized with your reminiscence of love loss. Willingly, you shared diary entries and I could feel the vulnerable emotion leave your lips and enter my body. You sang so beautifully. You became my rock-a-bye baby, my sweet and tender caretaker curing my heart break induced solidarity with your hopeful words of love, swinging me in your arms, whispering soothing sounds, cradling my drunk ass to sleep, acting as the seamstress of my dreams, weaving together grainy 16mm thoughts 24 frames per second and images of romantic scenes starring James Dean, Humphrey Bogart, Lauren Bacall, Cary Grant and Eva Marie Saint.

I never gave a shit what any critic, professional or otherwise, had to say about you. Comments questioning your talent or making a mockery of your appearance or negative media attention regarding your past or sincerity to music seemed to be deeply rooted in some soil saturated in the most bitterest of haterade. You never seemed too concerned by the riff-raff anyhow. You continued to just keep doing you, shining like you were supposed to, your radiance gradually growing brighter and the magazine covers, the music video budgets, the motion picture scores, and the world tours would continue to add up, proving that the world thought you were as great as I always knew you were.

We certainly have come a long way. Before Wikipedia, the blogs, mags or newspapers knew anything about you, all I had was the videos you’d uploaded to youtube and it was the year 2011. I personally have to thank Syd Tha Kyd and Matt Martian’s musical brainchild, The Internet, for introducing us. They remixed your claim to fame single, “Blue Jeans” and I have to admit their instrumental track hooked me at first, more than you did, though I was fond of the lyrics and your voice. After weeks of constantly bumping their remixed version and with you being a mere faceless sample, I stumbled upon a headline mentioning your name and your puckered pink lips on either The Fader or Complex mag and there you were, cigarette in hand, looking as gangster as possible in your Hollywood t-shirt. The image screamed, “bad bitch” and “rebellious” and I desperately wanted to know you more.

You had not yet experienced 14-year-old fan girls nor had you performed on SNL. This was before you were a featured guest at Kimye’s wedding in Versailles; before Courtney Love or Kurt’s daughter ever uttered your name. This was back when I watched interviews of you by the pool at the Chateau Marmont .

Back in 2013, I once watched you cry tears of amazement in high-definition during a Dublin show through the screen on my laptop. The entire crowd, people halfway across the world were singing your words along with you. How fucking crazy is that? It was beautiful. Your tears were beautiful. The love that you had written about, that by now had transcended yourself, was beautiful and at that moment I felt you, I really felt you and I myself almost cried. Indeed.

When the time came for my place in the crowd, reciting your words back to you, it was 2015. Four years after that remix and I had to admit that we weren’t as close as we used to be.

Standing next to the homie Marge on the vast lawn full of Lana fanatics in flower crowns and Pepsi-Cola tee shirts I did not feel at home; I did not feel like they belonged or were truly worthy of speaking your name. I had no clue why any of these girls, with their even tans and bored boyfriends, were in attendance. Did they read The Fader cover story or the Complex cover story last summer or were they just obsessed with your image and a few singles? Did they buy your first CD from Target for only $7? Who knows, maybe I’m just being a stupid piece of hipster shit.

So, as Marge and I stood surrounded by millions of minions, we shared cigarettes and a water bottle full of white rum. As the dark evening blue started to fade and the heat became slightly more bearable, and after countless eager chants, Lana Del Rey, the goddess yourself, finally graced the stage in a stunning red gown, miles of leg running below the hemline. I had made it from the computer screen to reality; from the audio recordings to a PA system linking like an umbilical cord to the microphone loosely gripped in your hand. On the inside I was as giddy as the other little chicky babies in my perimeter but on the outside I was at least fifty shades of cool, sipping from the yellow patriotical American Spirit wedged between my fingers, smoke whispering from lips, calmly tilting the bottom of the water bottle upward enjoying the warm splash of rum on my tongue.

As much as I would’ve liked to fork over more than half of my paycheck for a spot right in front of the stage, something inside of me knew I wouldn’t be able to handle it. Knowing that you’d be an arm’s length away, seeing all of you so close, would’ve been too much to bear, like looking God straight in the face. My distance was good enough for me.

When you spoke your firsts words to the crowd, screams erupted from within the arena including the one no one heard that existed only within my inner mind. All eyes were on you and I knew my smile would go unnoticed so I let it shine, giving no fucks. I was thankful for the jumbotron monitors and for the zoom feature on the video camera for they allowed me to see your expression of mirth up close and personal and I imagined that I was there on stage with you.

Eventually you proceeded to give us all what we came for, doing what you do best—putting your heart and feelings on a pedestal for the sake of art. I began to lose myself. I was back in that dingy ole bar again and your voice was as sweet as ever, causing my body to erupt in chills and goosebumps all over, which was a perfect solution for the sticky armpit-like heat blanketing us.

There were moments when I truly believed that, if I wanted to, I could’ve left the ground, leaving the crowd behind, coasting upward, ascending into the air, towering above the stupid flower crowns beneath me and dance and swoon in the wind as I followed the serene trail your voice left hanging in the air.

There are only a handful of singers that I’d like to see perform (Jeff Buckley, Elliott Smith, Amy Winehouse, The Smiths in the 8os just to name a few) and there aren’t often times in my life when I get to witness something after hyping it up in my head but I was grateful to be alive long enough to attend that concert, to hear my lullaby angel sing to me in real time and irl.

As the show progressed I started to feel a bit claustrophobic in the crowd so I headed down below, becoming eye-level with everyone’s ankles and feet, which were merely shadows at that point. Lying on back I polished off the bottle and lit one of my last cigarettes as you started the next song.

The dark figures towered hundreds of feet above me, granting me solace and solitude at the bottom of their pit, the open sky agape where my standing body once was. The stars glistened atop of the darkish purple sky; clear. I saw an airplane go by and you sang to me and only me for the first time of the night. A song we both knew all the words to.

Victor Freeze thought living in a miserable place was productive for making good art but realized his well-being was not worth the sacrifice. He lives in the Internet on twitter and tumblr.