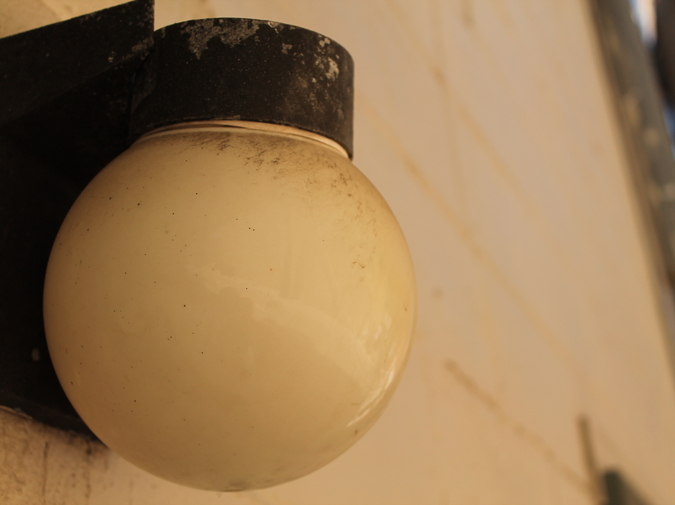 This month sees publication of our newest print issue, Hobart #14. As such, and as we have done to accompany our last few print issues, we are devoting the entire month to various "bonus materials" -- photo essays, alternate endings, drawings, extra short fictions, interviews, & more! Below, a kinda unclassifiable "interview" with Andrew Bourelle, the author "The Swimmers" in the issue, by... the narratory of "The Swimmers."

In early December 2012, the Narrator of “The Swimmers” sat down (figuratively) with author Andrew Bourelle to discuss the story. Here is a transcription of their conversation.

Narrator: Where did the idea for “The Swimmers” come from?

Andrew Bourelle: The story actually came from personal experience. When I was growing up, my friends and I would camp out in the backyard and sneak off late at night. We mostly went hiking through fields, but sometimes we’d walk through the neighborhood. We were never really up to any trouble. We weren’t vandalizing property or breaking into houses. We just found it fascinating that this other world existed at nighttime where everything is different.

N: So is the story true?

AB: No, just the concept. Some of the little details. Like playing in the park in the middle of the night. Shooting fireworks off in the neighborhood. And, of course, sneaking into someone’s swimming pool. But the plot, the characters—that’s all fiction.

N: Is anyone in the story based on someone who’s real?

AB: No. Some of the details come from things that happened over a few summers with different people involved. I think there are several of my old friends who could read the story and feel reminiscent over it, but no character in the story is based on a real person.

N: Tell me one thing from the story that really happened.

AB: The part where the mom comes out brandishing a pistol really happened. Movies always show kids tapping on windows or throwing pebbles to wake up their friends, and the parents never notice. Things don’t always work out that way in real life. I always thought the parent behaved sort of comically, threatening to shoot us, but now that I’m grown up, I can relate a little more. What was she supposed to do about some juvenile boys tapping on her window trying to wake up her daughter? I probably would have come out wielding a pistol too. If I had one.

N: What’s something in the story that didn’t happen?

AB: Besides the whole plot?

N: You mean my first kiss?

AB: Yeah. I wish that was real, but it wasn’t. As shy as the main character is—I mean, as shy as you are—I was even worse.

AB: Well, at least you were able to enjoy it.

AB: You would have liked the first draft of the story better though. You got a lot farther than first base in earlier versions of the story.

AB: No, I’m just messing with you. Your romantic scene was always destined to be short-lived.

AB: I actually wrote the story in 2003. The first draft anyway. It’s just taken this long to find a publisher.

N: Why do you think it took so long for the story to be published?

AB: I think the story has a nostalgic feel to it and works better because it takes place a decade ago. We’re far enough removed from 2003 that the distance adds to the story’s wistfulness. If it’s set only a few months before people are reading it, I don’t think the same feeling would be there.

N: Do you really think that makes a difference?

AB: Either that or the story’s crap and it just took this long to find a journal I could trick into publishing the story.

N: So you don’t think much of Hobart?

AB: No way. Hobart is awesome. I’ve been trying to get a story into Hobart for a long time. It’s ironic that I’ve been sitting on the right story all this time.

N: If people like the story, where else can they find your fiction?

AB: While I wrote “The Swimmers” first, I actually have a couple similar stories that have been published before, one in Red Rock Review and another in Jabberwock Review. I kind of think of them as a trilogy, even though there are no similar characters, nothing that overlaps. The stories are very different, but they’re all sort of dark coming-of-age stories with young male narrators. And water is a thematic part of each story. Seems like everything I wrote for a while involved water in some way or another.

N: Before you go, I’d like to ask you one more question.

N: Yes. In “The Swimmers,” you don’t give the narrator a name.

AB: You’ll have to read the story again to find it.

AB [shrugging]: Sucks for you. At least I gave you a pretty good first kiss, right?

Andrew Bourelle’s work has appeared in Cold Mountain Review, Red Rock Review, Jabberwock Review, and other publications. He lives in New Mexico with his wife Tiffany.