An Interview with Salvador Plascencia 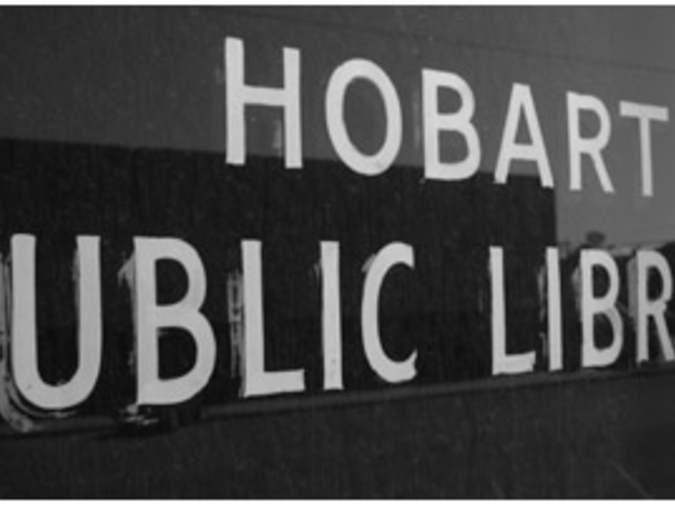 Salvador Plascencia is the author of The People of Paper, a novel in which the people of El Monte, California, wage a “war against omniscient narration” while the author himself is busy getting dumped by his girlfriend. Add to this a host of characters including (but not limited to) a baby prophet who speaks in large black rectangles, a constantly dissolving woman made of paper, and the true history of Rita Hayworth, and you get a novel that is by turns whimsical, despairing, and darkly optimistic. Plascencia has already been compared to Gabriel Garcia Marquez and Flann O’Brien while simultaneously being championed by George Saunders and Aimee Bender.

This an excerpt of an interview that started out at a coffee shop in Echo Park and ended up in front of the Edendale Library next door, with the added benefit of a couple post-interview follow-ups. The interview in full will appear in Hobart #6.

Hobart: With The People of Paper, was there an initial image? What was the very first idea that sprung in your head?

H: Most of the book takes place in your hometown of El Monte. You’ve created your own mythology and set it in a kind of permanent present-tense where some events are happening many years ago, while some events are happening right now. Were you conscious of developing this kind of perma-chronology? This anytime? Or was it something that formed itself gradually, as you went along?

S: It was little of both, but also I was really fearful of attempting an historical reality set in 1988 or 1970. Because in a way you’re locked in to that possibility. If you have a time, a kind of temporal place, that’s not tied to any real history, then you can jump around. You can go from Africa to the Americas back to ancient Rome anytime you want—it becomes liberating. You can put Napoleon, you can put Nixon and Kennedy on the same page. It was my own kind of weakness, that I couldn’t be constrained into a small historical space and get the same mileage. I needed to jump around, cross continents and times and in that way, the mythological backgrounds helped me do that.

I'm never quite sure how much of what happens in a novel is planned and how much of it is just a serendipitous meeting of how you're feeling that day, that '80s pop-song that is in your head, and a childhood memory of chasing a mule across a dry river. It becomes a matter of how the brain translates and synthesizes all these components into prose and then into this thing we ultimately call the novel.

If I said "fairy tale," I don't think I meant it because I'm weary of the connotations we often associated with these types of fables. The People of Paper does not want to be a parable or a story of magical happenings in a time no one was there to witness. I wanted to get rid of the temporal distance and bring everybody together in the same room. To simultaneously meet your great-great-grandfather and that annoying neighbor you will have three apartment moves from now. In this kind of gathering, you find out that your progenitors were indeed wise, hard working people, as you always imagined, but you also find that they never washed their dishes and stuffed their shoes with newspaper for an extra inch of height. And that neighbor you’re going to hate one day, he courteously offers you a plate of cheese and fruit. I wanted a type of time travel where you never need to leave the neighborhood.

H: When you think about stories and legends coming out of the same primordial soup that we all supposedly came from, everything commingling and mixing together, do you think that the El Montes of the world, the Oxford Mississippis—the smaller more insular communities—are those towns more conducive to the formations of myths and fantasy than larger cities like Los Angeles or New York?

S: Well, they’re less known, right? The mythology of Los Angeles is already known and if you talk about the LA mythology people are going to recognize it immediately and say Oh that’s from Nathanael West, that’s James Ellroy, then you recognize that mythology. But these smaller places, these satellites, haven’t told their story yet; they haven’t been accessed.

And I’m from El Monte, we have our mythologies and nobody writes about them. A lot of it is hometown pride. I love El Monte, it’s a great place so I wrote about it.

But El Monte isn’t an out of the way place. It's 13 miles from Downtown LA, it’s hosted events for 1932 Olympics. Three major freeways cross through it. Zappa has a song about hanging out in El Monte stealing hubcaps. The writer John Kun forwarded me this song "Dog Breath" which I’d never heard before. Zappa sings it in a kind of Brown Face—pretending he's a homie, speaking in beat-up Spanish, cruising in his Chevy with a neighborhood girl and stealing hubcaps. It's a riot. I don't know that much about Zappa, so I don’t know how much of it is a joke and what part is misguided, but it's so hilarious it's difficult to get offended by it.

Mr. Ed was born in El Monte, and the original MGM lion lived on Valley Blvd. The McDonald’s foundation is built on the Imperial stool of Tarzan extras and MGM mascots.

Besides its being a footnote to Hollywood, El Monte is also the gateway for thousands of Latinos and Asians into an American life. All these immigrant stories are making first contact with the English language. You have these narratives being translated and mistranslated and trying to find meaning in a new American context. You couple this with Monte's dark side—the execution style murders, the girlfriends chopped up to pieces and stuffed into suitcases, the modern day slave camps found next door to my favorite burrito stand—and you have this very rich narrative soil fertilized by everything from Hollywood's barnyard shit to the blood and perspiration of the neighbors.

Not to be sentimental, but I love El Monte and the people in it. There's nothing better than playing soccer on Saturday with the San Gabriel's in the background, kicking the ball to people you've known your entire life while the grandpas and moms cheerlead on the sideline.

H: What kind of myths were prevalent in your family? Your mother and father and grandfather—what were some of the myths and stories that got passed down to you?

S: Its hard to pinpoint which ones…it’s more of a mode of telling stories. My uncle has these stories of crossing the border, hiding from the border patrol: being in a bush, the helicopter coming down, flying above and then flying really low, and the wind from the blades blowing away the bush so he was exposed. He tells it in such an off-handed way that it’s almost funny. To him, it’s just a story of crossing the border, just big machines on top of you and people chasing you. It’s a kind of hyperbolic understatement. Operating in this intensified, slapstick grotesqueness of an event, and then moving on to something else. There’s not any self-consciousness of how fantastical it is.

My mother tells this story of a creek she grew up next to. The stream meandered through the property of this very stern man who lived in a small adobe with his wife, daughter, and father. As the story goes, the daughter was a strikingly beautiful girl but was rarely seen about town. There was a rumor going around about incest but it was unclear if it was the father or grandfather abusing her.

My mother would regularly hop over the creek and climb a small cliff to deliver lunch to my grandpa who plowed his field in the mesa. My grandpa would share his food with my mom and then give her a ride on the plow rig. I’ve got this very tender father-daughter image of my grandfather guiding a wooden plow pulled by these huge big-eyed oxen while my mom sits on the handles drinking half of my grandpa's Coke. There's this clear moment of parental love while downstream incest is going on.

But, anyway, my mother drinks her last sip of Coke, packs up the utensils and napkins and heads back to the house. She climbs down the short cliff and then hops over the stream. But she doesn't hear the trickling of a small river, she hears something else. It is this roaring noise, a stampede of thousands of horses. She looks around and only sees a frog and a turtle plopping into the water but the noise is like the river is overflowing and flooding the whole town. She runs home, frightened and crying, to my grandma. My grandma consoles her and tells her it was nothing, maybe a flash flood upstream, the rumble of thunder, livestock being lead to water…

Later that day, word comes that there has been a shooting at the house of the beautiful girl. The grandfather confronted his son about abusing his granddaughter and a fight ensued. There's blood on the white washed walls, on the dirt packed floors, and red absorbed by the legs of the wooden dining room set. The husband runs away, leaving his dead father behind, taking his daughter and wife and is never heard from again.

Decades later, I visited my grandparents and the stream had widened, the adobe's roof had collapsed, but I peeked in through the window and I could still see red on the wall and floor.

The story has everything: patricide, incest, scenes of the domestic agrarian life, rural landscapes, a ghost story countered by rationalist explanations, my mother with a confused premonition, nostalgia for plow rides. There are hundreds of stories like these in my family.

H: Now, they say, what is it? “Good writers borrow, great writers steal?”

H: What is something that you stole blatantly outright during the process of writing your book? It could either be in your book or something you used to actually write it, anything.

S: There was a Chris Mazza story called “Is It Sexual Harassment Yet?” and it’s written in columns with a dueling narrative between the male and the female so these two columns are always battling back and forth, and I really liked that dynamic, of these two columns talking to each other. I read that story and I thought, Why don’t more people do this? So I tried it. I kept trying it and kept trying it and it wasn’t working, and suddenly (what ends up being Chapter One in the novel) I had this kind of third person voice. This little girl and a Mexican wrestler in two different columns, and I put them together and it worked. I thought that I could have these simultaneous, complimentary voices all on one page and that was the moment where I got really excited and thought I can write a whole novel this way. That was the initial plan, but that wasn’t sustainable either. So you have these nice stops. You have a three column chapter, then you take a break and go back to more traditional formatting.

Also, I would read Vonnegut and he had those pictures that he drew and to me it was so liberating and exciting. It made me want to do what he did in terms of pictures in a book. But also, having read Marquez, I thought about how I could make it about that too, so in a way the book became this compilation of all these writers I love.


To read the interview with Salvador Plascencia in its entirety, including discussion on topics ranging from Ayn Rand to the X-Men, James Baldwin and Dalkey Archive to Denver Nuggets basketball and Smiths bootlegs, pick up a copy of Hobart #6.