An Interview with Rick Moody 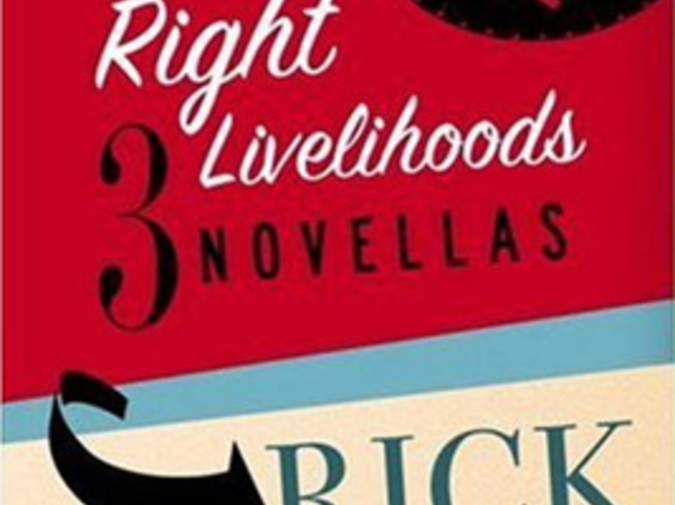 Rick Moody's not the kind of writer who needs one of these introductory paragraphs. Author of some of our most indelible recent literature, winner of big prize after big prize, National Book Award judge, you name it. Anything you don't already know about him, you'll learn by the time you've finished reading this interview, which we conducted via e-mail in July, during baseball's all-star break. My e-mail exchanges with Moody usually focus on the NL East rivalry between the Phillies and Mets. He's a big fan of the latter. That obvious character flaw aside, he strikes me as an altogether decent and charming guy. His most recent book, Right Livelihoods, consists of three novellas, which I found hilarious in spots, terrifying in others, and unmistakably revelatory throughout.

How does the Buddhist concept of Samma ajiva1 inform these novellas?

It's sort of a pun, in that each of the protagonists, to the best of his/her ability is trying to live correctly under the ascension of the political right. Thus: it's a book about fumbling, awkward, desperate lives in the creepy post-9/11 time. I don't mind the Buddhist resonances, because I am a fellow traveler with most spiritual schools, and I did, after all, call my first book of stories Ring of Brightest Angels Around Heaven, etc. The title amounts to conceptual continuity on some limited basis, therefore. All writing, meanwhile, is probably a proper observation of the right livelihood, I suspect, or the vast majority thereof.

Hasn't post-9/11 government policy essentially justified every manner of paranoia? In "The Omega Force," and I love the finality of that title, the less-than-reliable Van Deusen believes he's involved in "a conspiracy that threatened not only the island but also the very liberties we so cherish." Have the rules of fiction changed now that everything on the evening news is fiction?

I suppose to properly answer the question you would have to believe that fiction has rules in the first place. I tend to think it has inclinations, and these change based on history and ideology, but not on any complete or permanent basis. Remember, e.g., the "end of irony," so firmly declared immediately after 9/11 by people who a) didn't really know what the word meant, and b) had been hoping something would kill off the brand of fiction they didn't like anyway. They sensed an opportunity. Turns out these declarations, as in all such things, were premature. I don't feel like my rules have changed because of 9/11, but then my rules (which aren't really rules at all) are: 1) try to do something you haven't done before, 2) try to avoid aesthetic conservatism, 3) and never forget that politics hovers in the background of all art. If paranoia has made a recent comeback it's only because it never really ought to have gone away in the first place. That's why people still love those early Pynchon novels.

"K&K" is set in an insurance office, where, like Van Deusen, these people are preparing for a disaster. It ends, "[W]hat did this tell us about the way we lived in those days?" What do you suppose our contemporary literature--and perhaps Right Livelihoods in particular, if you want to go there--say about us to future readers?

In what you quote, I probably wasn't commenting on the particulars of literature, although "K&K" is quite a bit more realistic than I usually am. And that is a commentary of a sort. As a result of its naive realism, however, "K&K" is among the least effective examples of my recent work. I am just not cut out for naturalism. The idiom doesn't come easily to me. I worked on that story right up until the last hour I was able to make changes on the book, in an effort to get it to the level of the other two, and if I had it to do over now I would probably eliminate it from the book. That said, I think that the fact that the protagonist of "K&K" is a completely divided person and is unable to understand her own motivation really is saying something about the politics of this moment. A good example, this morning, is the Louisiana senator who this morning is revealed to have been a client of a Washington brothel. Vitter? Is that his name? Of course, like many good politicians, he is completely hypocritical, or so it would appear. He was a loudmouth on the subject of various ethical causes: against gay marriage, against amnesty for illegal immigrants, and so forth. (Those people broke the law!) And meanwhile he was a client at one of the Beltway's premier brothels. His story would be more interesting to me if he wasn't hypocritical so much as completely divided and in the dark, at least in part, about his own motivation. That's what I'm trying to drive at in this beleaguered story. What if there's something essentially oblivious, or delusional, about the American character after 9/11? Or, in the case of "K&K," in the weeks immediately preceding hurricane Katrina?

In the post-NYC-disaster "The Albertine Notes," you have a young writer hooked on an Ouspenskian memory drug and no longer able to clearly discern delusion from reality. I'm not sure that he's in search of lost time exactly, so what is he after? Are we as a species prone, politically and aesthetically, towards conservatism after a disaster like Katrina or 9/11 or the nuclear detonation of this novella?

Spencer Lee, the protagonist, collides with Proust, but he's not a truly Proustian guy. He's just trying to indulge in nostalgia in a very bad historical moment, with very bad results. This seems like a human impulse to me, but one that is doomed to failure. I think the longing for the halcyon days is a line that we get sold constantly these days. I figure each of the novellas deals with this question. I don't know if we're inclined toward conservatism, nor do I know, with any certainty, that we have nuclear disasters in our future. I figure the longing for the halcyon days probably appeals across the political spectrum and is more human than political charged. Literature, meanwhile, is often dealing with questions of memory. Look at Sebald, e.g. Or Andre Aciman. It's a tendency that goes with the past tense inclinations of much of nineteenth and twentieth century literature. The present-tense-obsessed and cinematically canted American fiction of the contemporary moment has perhaps a different axe to grind.

Speaking "American fiction of the contemporary moment," can you tell me anything about this Mars project you're working on? What are you going to do that you've never done before? What specific challenges have you set for yourself? Are there things you avoid writing about?

It's not a Mars project, so much as it's a book that is partly set on Mars, in the midst of a Mars shot, the very first manned Mars shot. It's actually sort of three books in one, because there's some stem cell stuff in there, and a whole long section set in the desert Southwest, and a lot of musings on technology and the human body. All very distantly indebted to a horror movie from the early sixties called "The Crawling Hand." The specific challenge is to try to sustain a futuristic setting without ever once sounding like I'm writing, uh, science fiction.

Who will win the NL East this year?


1 In What the Book Taught (Grove Press, 2nd & enlarged edition, 1974), Walpola Rahula writes, "Right Livelihood means that one should abstain from making one's living through a profession that brings harm to others, such as trading in arms and lethal weapons, intoxicating drinks, poisons, killing animals, cheating, etc., and should live by a profession which is honourable, blameless and innocent of harm to others."

Andrew Ervin is an MFA candidate in fiction at the University of Illinois at Urbana-Champaign. His short stories have appeared in Fiction International, Oxford Magazine, the Prague Literary Review, Chicago Noir (Akashic Books, 2005), and elsewhere.