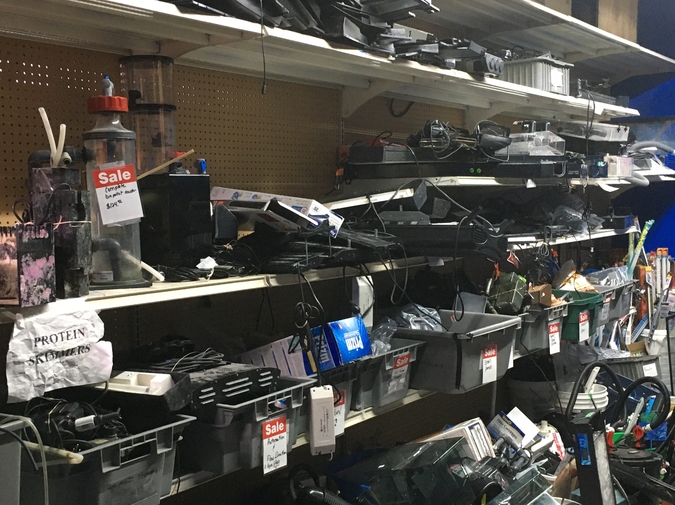 When people ask me what I do for a living, I’ll hesitate before answering because I know what’s to come. I’ll describe the work I do—I go to thrift stores, buy items of value, and resell them for profit on the internet—and they’ll typically respond by saying something like, Oh, so you’re a picker, and I’ll cringe or twitch or clear my throat and say, Well, yeah, I guess you could say that.

I have always found the term picker to be offensive, and I’ve never really understood why. Picker, in this sense, came into prominence with the success of a reality television series called American Pickers. On this show, two men—the reality TV equivalent of Jasper & Horace from 101 Dalmatians—travel the States in a white Sprinter van, ransacking old barns and sheds and crawlspaces in a tireless quest for valuable antiques. This hardly fits my job description. It is true that I pick T-shirts from clothing racks and pick knickknacks from shelves, although grab or remove would do just fine as synonyms. So am I a grabber? A remover? No. Neither has the right ring to it. Peter Piper didn’t grab a pepper.

I came from the city, was sort of swept away by the bristles of time and love and bowel-upsetting uncertainty, and I am now in a dust pan called Mora County, New Mexico. Dust pan is not derogatory; it’s a just a place where things end up. On that note, I do not believe we are all just dust in the wind, or that we came from dust. If anything, we are probably more like little seedlings, being blown around all of creation, germinating and flowering and getting snowed on and dying. In other words, I am a man whose girlfriend got a job on a wildlife refuge in another state, and in a desperate attempt to keep the romance alive I followed her to this adorable adobe house on a beautiful prairie in the middle of nowhere.

As it turns out, rural New Mexico offers little in the way of thrift stores. They are far away and require a shameful amount of emissions output to reach. Besides, neither Santa Fe nor Albuquerque compare in terms of what their thrift stores have to offer. Denver had been spoiling me rotten for over eight years.

I once picked a translucent, slime-green Xbox from ARC thrift store in Denver for $9.99 and sold it on eBay for $965 to a guy in Wyoming. It was hand-signed by Bill Gates in metallic paint-marker. Only twenty were released, one for each member of the team who championed the original console in Silicon Valley in 2001. Now one was in my shopping cart in Denver, sixteen years later.

To pick is to engage with the past in material form, to participate in a mystery of origins. Each Hooters mousepad or ceramic dragon figurine has a story. These materials sit on shelves and hang on racks, awaiting resurrection. It is my job to give these items a new story, to reintroduce them as things to be desired. This, somehow, has become a form of labor.

Picking was my passion, who knew. Without it I felt lost, useless, like a part of me was missing. Time began to slow. Whenever my girlfriend would get home from the wildlife refuge, her duck canvas Carhartts smeared with dirt and animal blood, and ask how my day was, I’d fabricate a story. Oh, you know. I had a real busy day. I got some serious writing in, a little exercise, and I’m even teaching myself how to play disc golf (this last bit was true; three consecutive lies would have been overkill).

I doubt that she bought it. She could probably sense that I was wobbling, like a windswept golf disc, into utter purposelessness. She assured me that I’d find work, but all I cared to do was to sit around and finally put some thought into what it is exactly that bothers me about the term picker.

Historically speaking, picking was a job carried out by the lower class, if not the downright poor. Gleaners, a job title of the biblical variety, were peasants who picked the leftover seeds from fields that had already been harvested by commercial farmers.

Cotton was of course first picked from fields by hand, by serfs and slaves, until the mechanical cotton picker was introduced in the early 1920s. From this line of work came the now culturally-inappropriate term “cotton-picking.”

Goodwill’s Outlet Worlds are large processing plants where leftover items from their retail stores are shipped and then compartmentalized in huge blue wheelie bins. The bins are then wheeled out and set up in lines, maybe seven or eight deep, and customers, who often wear white dust masks and heavy-duty work gloves, line up on both sides of the carts. Finally, a designated employee will yell, “Shop!” and the pickers attack the bins like hyenas ripping apart a wildebeest.

Modern picking is a working-class affair, there’s no denying that. It requires no specialized education, no certifications. You study the completed items portion of eBay and figure out what strange objects people will pay money for, and then you search for those strange objects at thrift stores and garage sales and estate sales.

Don’t get me wrong, I’m not saying there’s no skill involved. It takes time and capital to find your niche, and you have to develop an eye and learn to transcend the madness of consumer chaos. But I’m loath to accept the job title. When I’m at the stores and I see other people on their phone, on the eBay Mobile app, looking up the value of T-shirts, I roll my eyes and think, These fucking people. Then I look down and see eBay open on my phone.

I live in picker denial.

Just look at it: p i c k e r. What does it make you think of? It makes me think of tweaker. And what does tweaker make me think of? Meth.

Growing up in Ottawa, Kansas, an armpit, I developed the fear of getting stuck in Ottawa, Kansas, in an armpit, for the rest of my life. Ottawa was, is, big time into methamphetamines. As a god-fearing teenager in a small town, I spent a lot of time at Walmart, especially at night. There, I’d see those emaciated men and women with hollowed cheekbones and face-skin like an orange peel under a magnifying glass. A common side-effect of meth is excoriation disorder—or the compulsive urge to pick at your skin. Any medical term fit to follow the movie title Terminator is bad business.

I’ve never done meth, but I do have excoriation disorder. It began right after high school and it continues on into my thirty-second year. When I pick at my skin, I get lost in a timeless space. I feel free from the unremitting thoughts of existential burdens, like, for instance, not having a job. Skin-picking is a form of meditation, albeit an unhealthy one, that inevitably perpetuates my biggest insecurity, i.e. my rugged, pockmarked face.

Picking, the vocation, provides me with the same feeling of transcendence that picking at my skin does. Thrift stores are notoriously nutty, and a certain amount of mental discipline is required in order to block out the sensory overload. It has taken me years to get to this level, but I am there. When I am searching for something, I am internally at peace. I have a purpose.

The largest scar on my face comes not from picking but from a cancer scare. When I was twenty-four and in the heat of a concerning bout of hypochondria, I convinced myself that a large inflamed cyst near my nose was in fact malignant face cancer and I would die if I didn’t have it removed. It turned out to be 0% cancer but now it is 100% a scar.

With my job more or less out the window, my landlord-cum-next-door-neighbor eventually hired me to perform a few odd jobs around the property, I think out of pity. She was far too sweet and good-natured to get rid of the tent caterpillars, who’d set up their gossamers in the chokecherry trees out back, so there I was, drowning hundreds of fuzzy insects in a bucket of rainwater. Apparently, mass drowning is the most efficient form of tent caterpillar extermination. Have some? I am for hire, $10 an hour.

One morning I woke up with the word “roustabout” in my head. I looked it up. There I was.

The next morning I woke up and looked in the mirror: Terminator 9: Excoriation.

For my next job, I was to exterminate the pinyon and juniper pine trees that had begun to encroach upon the west pasture. Both trees are considered invasive to the area due to the amount of water each slurps up from the surrounding soil, leading to unwanted erosion. To combat erosion, my landlord hired me to take them out. I was now officially a rural hitman. I chopped them down with a dull hatchet and dragged them like fussy children to a nearby arroyo and tossed them in.

One day, while I was mindlessly slaughtering a baby pinyon, I noticed a yellowish glob of sap attached to the tree’s trunk. Sap in this state of matter is called resin. According to many an online source, people use pinyon resin for salves, balms, soaps, and candles. Or, the resin itself can be burned, as a kind of incense. I picked it from the tree. It smelled wonderful.

In a matter of days I had visited nearly every pinyon on the property, collecting over five pounds of resin. The search felt oddly similar to what I feel when I pick from thrift stores, the thrill of the hunt. Only, out there, in the trees, I encountered no human souls, no yowling children, no fellow pickers to remind me of my own dubious vocation. Instead, I was accompanied by the strange sounds of the high desert.

Above me, a flock of pinyon jays either argued or joked, I couldn’t tell. Their calls are akin to sinister laughter; their caws more like ha’s. Although I much prefer a minor cacophony of birdsong to the human bedlam of thrift stores, I began to feel that the cawing of the Pinyon Jays was the laugh track to the sitcom that had become my working life.

What to look for while picking: resin, pitch, dried sap.

No more lies at the dinner table. I began to take pride in my resourcefulness, my new job. When asked how my day went, I’d get serious and say something like, Those pines sure are producing this month.

People from all around the country are buying the pinyon resin that I pick from trees, I can’t believe it. New York City, Modesto, Boise, the sap is spreading. This is what survival looks like in the 21st century. I am surviving.

Seedlings, secondhand goods, pine resin, people, what’s the difference. It’s all a part of some continuous mass dispersal. We start here and end up there, relocated by the unseen hand that picks us. We are objects with stories and histories, blowing from here to there, beginning new jobs and new lives.

This is the place where I have ended up. I am growing, I am living. I am a roughneck with rough skin doing not-so-rough work. I am in the trees, totally alone, a man with a purpose. I grab, I glean, I pick. I’m barely even here.

Cameron Thomas Snyder's stories and essays have appeared in Subtropics, The Normal School, DIAGRAM, Barrelhouse, Entropy, and elsewhere. He was awarded the 2019 Emerging Writer Fellowship in Nonfiction from Lighthouse Writers Workshop and a scholarship to the Chautauqua Institution. He works on a ranch in northern New Mexico. You can find him at camerontsnyder.com.