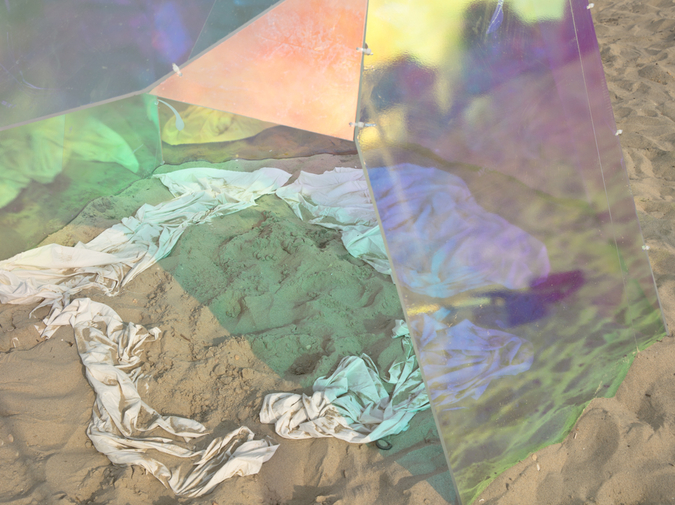 Dad’s side are all boring fucks. Mom’s side, god—all my mom’s brothers thought they were the outlaw rebel cowboys of New Jersey. Wild ones. Alcoholics. They were fun, while they lasted. All those men on the maternal side are dead, and now the woman who survive, mom’s sisters, now they are getting all their body parts cut off. Mom’s maiden name is Robin Seamen. That’s not funny. Robin Seamen was a little bit of an outlaw cowgirl herself, having famously robbed a fluffy white dog from a pet store, and having done all kinds of other minor crimes like teaching my brother and me how to litter. Dangle your hand out the car window, open your hand, let the garbage sail away. When I was five years old, I was turning into a wild man myself, in the middle of the DMV, and mom wanted to instill some good into me. So she yanked my arm and knelt down, said to me, “You better be good!” I said, “I don’t think I want to be good.” She said, “If you’re not going to be good, I’m going to kill you.” I said, “You won’t kill me, you love me.” She said, “I won’t? I killed your sisters. All three of them.” I laughed, “I don’t have sisters.” She said, “Exactly. You don’t have sisters. They were bad, they didn’t listen, so I killed them, Bud. Are you going to be good now?”

And that’s how I became good. And that’s why I’m still good. Going on thirty years now, I’ve been good. I don’t want to get killed like my sisters did, by my mother, one of the last self-identifying outlaw rebel cowgirls on the eastern seaboard of America.

Dad doesn’t drink. But legend has it, thirty seven years ago, worried about my birth, he got drunk on a night shift ‘dinner break’, visiting a bar in Perth Amboy called Moby Dick’s with the rest of the construction crew—he claims to have downed 21 vodka and cranberries. That night of drinking and its resulting sickness changed his trajectory. Blue. And shaking. And unresponsive. And oh, boy, legends also has it he woke up a better person.

The Smith side of the family doesn’t drink or do drugs. They are not exactly buttoned down people, but they are grounded in straight reality, and they are nine times out of ten, sober.

When I met Rae, she would come and sit with me in the basement and we would rediscover the records my parent’s used to listen to. Rolling Stone’s Let it Bleed. Sitting down there drinking gin and whatever. Dad seeing the bottles in the trash can and laughing. Calling me up to his room. Opening the closet. Wow. Handing me down arms full of Tanqueray. Drink up. Enjoy. And we did.

As of this writing, only one of mom’s brothers survives—Uncle John—mom’s baby brother, now in his late 50s and recovering from a stroke that froze most of his motor skills. He’d been living under the high tension power lines in tent city. Sugar sand and scrub pine. And buzzing all around. And oh no, someone call an ambulance. The other homeless people running out to the road, flagging down help.

I saw Uncle John in the home after his stroke.

My mom said, “Why do you want to go so bad? Are you going to write about it?”

“Are you going to say shitty things?”

Uncle John’s face was all cut up because he’d fallen out of his wheelchair the other night and the nurse was still mad about it, calling him stubborn and stupid, which were both not incorrect. I don’t know anybody in my family, either side, that’s not stubborn personified, and stupid personified. Uncle John couldn’t talk but he was trying to talk and was frustrated because he couldn’t. Could kind of just flail around in rightful anger, almost say — Noooo! Mom said, “Do you want cigarettes, John? Is that it? Do you want a beer? You can’t have a beer.”

I am sometimes sure I’m becoming an alcoholic. Come home and mean to pour a glass of water, and leave the kitchen with a glass of whiskey and drink it at the computer while I type. The human body is 70% whiskey and 30% blood and water, or something. That’s fun. Fun times. Samuel Johnson says, ‘He who makes a beast of himself gets rid of the pain of being a man.’ That’s just a stupid thing to say. Or, maybe I never committed enough. I’ve just been regular drunk, not beast mode drunk. I’ve always had the pain.

Meanwhile if you look up at the sky, the moon looks the same way it did 100,000 years ago. You can be scared of monsters. Some of them you pour right down your own throat.

Here’s a story about Uncle John, and his brother Jeff: When I was four, they took me camping. Uncle John was plastered and telling me, “We gotta be careful because the New Jersey Devil lives out here and he’s gonna find us and eat our gizzards.” He leaned over and said, “But I’m gonna teach you how to tie your shoes so you can run. It’s easy.” Breath like mustard gas. Slight resemblance to Burt Reynolds. He tried to kneel and fell over laughing.

Uncle Jeff wasn’t as drunk. Uncle Jeff was missing a front tooth and was fat, and looks like me. Not a movie star. He said, “It’s easy to tie your shoes. It’s like this.” He knelt down. “You make two titties. This tittie. And that tittie. And you wrap the titties together. You put one tittie over the other tittie and then you pull this other tittie up like this—and there you go, you pull, yup. Congratulations you just tied your shoes, young man.” He patted my head. I was proud and rightfully so. In life, you either find tricks, or you just stand there numb, dumb, bewildered. I knew even then, that you could leech truth out of anybody if you were patient and didn’t discard them just because they were sick. Now, I’m telling you.

Now I’m telling you, the drunks are swinging tree to tree, swooping over the jungle, swinging from a vine, swooping down to dip their hands in the river; and the drunks get flung up in the air now—back up into the trees they go. These are the very trees that the theory of evolution has said they come from, so it makes sense, it’s Saturday night in the jungle, let’s party, let’s de-evolve! Now the drunks feel so very alive in the branches, gleefully they’ll stay up there for a few minutes, admiring the views, until they’re thirsty and sad; then they’ll swing down again and again on that same weakening vine, drinking from the river, until eventually that vine snaps and they crash into the mud, laying face down, weeping—butterflies landing on top of their heads and they wouldn’t even guess it in a hundred lifetimes. People need to be reminded of how pretty the outside world is, they don’t get to see it too often, they are locked up in a personal, lightless room, that might even look to you like it’s as bright as the surface of the sun.

When we lived in the Blueberry House, I remember walking down the concrete block steps in the kitchen to the kind of dungeon that Uncle Jeff lived in below us. The place was moldy and stunk of mildew. There were silver fish everywhere. He’d be down there drinking beer. You could count on that. Creedence Clearwater playing on his 8-track machine. Just got home from Illinois, locked the front door oh boy. A dim light in the corner of the basement. I walked over and sat on his mattress that was on the floor. I said, “Is it true that my mom and dad had another kid before I was born and they made him live in the basement like you because he was bad?”

“Live in the basement because he was a bad boy.”

“Your brother is good.”

I said, “No, they said I had another brother. He was bad. He got punished. They—”

“Dad said they killed him.”

“No. They never killed anybody.”

Uncle Jeff got quiet and stared at the mattress. He asked me to shut the music off. He put his hand on his forehead and breathed heavy.

“I’m fine. I’m—” He leaned over and puked. He said, “I’m sick. Just don’t tell your mom.” He took his shirt off and threw it on the puke. He said, “She’ll kill me.” He took a swig of beer and washed the taste from his mouth.

There is a party for my parents’ 60th birthday. Cake. Hamburgers. Hot dogs. All surviving members of both sides of the family come, and that’s not many. Mom’s house. Green grass. August. Bruno Mars sings on the waterproof DeWalt construction stereo, he says: And your sex takes me to paradise and your sex takes me to paradise. The above ground pool is cold because the trees have kept growing since my youth. Everybody is there. Nobody is swimming. Even the brave children. Well, almost everyone is there—the ones that can make the travel because of money. Because of jobs. Dad’s brother, Uncle Jimmy, survivor of two heart surgeries, smiling and stoic, a genius of practical math and how to run a union construction job; his daughter Jaime, and his daughter Cindy; My mother’s sisters Elaine, and Sandy; my second cousin Lee; my second cousin Jason; my cousins Terry and Jenny, as well as their children; my brother Will, who’d just gotten his teeth fixed and was smiling again, standing tall, his beard cut a little shorter than usual. My dad, grinning and sipping his beer of the year, John Deer hat on. Mom beating her hot shot sister at corn hole. Uncle John was there, too. They’d gotten him out of the facility for the day. He had to be back by nightfall, doctor’s orders. He was still in the wheelchair and he couldn’t speak very many words yet, but yet, he’d argue with his sisters, my mom yelling at him good-natured and my aunt Elaine yelling at him good-natured, and their oldest sister, Sandy, sitting there with her severed leg, lopped off for diabetes just like my Uncle Jeff had gone through—what had killed him.

Anything on your body can get gangrene and have to be lopped off. Anything in your body can rot too. Excavated. We are only here for a little while. You can even drown in your own tears. Swallow enough down the wrong pipe—give yourself pneumonia. Here, put this powder in your tears. One day we will vanish into thin air! But they will talk about us a long time after we leave. The things we said. The things we did. Our amazing, pointless, lives and all the unending good we somehow accomplished, even amidst our fits of daily wickedness.

His sisters laughing. And his eyes bright. Mustache like a broom. Uncle John, threw his head back and yelled one of the four words he could say now, which he had relearned …

You learn. You unlearn. You learn it again. You’ll do just fine. And you’ll be good. You really will. You’ve learned the only way to survive is to be good. And if you’re not good, you know what’s gonna happen. If you’re bad, my parents will kill you.