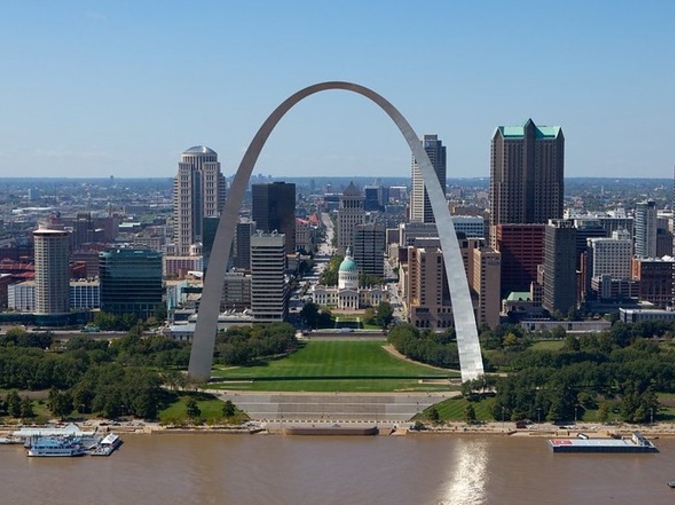 Under what circumstances do we find ourselves here? The house is a duplex — the top half a bit like staying inside a skeleton with the furniture simmered down to stock. There are no towels and the silverware is kept in a jar on the counter. The coffee maker is definitely a fire hazard.

Right, this is St. Louis everybody and those were screams last night, right? Something went knock-knock on the, what, the TV, the back of the couch? The dominant impression is that the previous owners were surely murdered, but they are still capable of sending email — arranged our stay on the app, in fact. There is a presidential type portrait of a llama and I swear its eyes follow you from the bedroom to the toilet. But the door at the bottom of the stairs locks itself so we are safe, trapped.

Breakfast is hip and then we visit the botanical gardens which are resplendent, I mean, redundant and filled with cosmos, I mean, cosplayers. It’s the Japanese Festival so there’s a sumo match amongst the bonsais and it’s so hot we’re dripping culture. Here’s your 21st century balloon animal, kid: a stressed out octopus. Here’s mine: just dread in balloon-shape.

Back on our second floor, maybe just the skull of the house, we take a breather. Weird sunset glow. The llama in the shadows minding its business. The walls are bloodless.

My wife takes a nap before dinner. Sometimes when I think she’s gone from me forever, she’ll reach out and just touch my stomach. If there were some other villain, she wouldn’t do that. I check the weather and surmise my own garden at home is dying in the heat. The carpenter bees probably sawing up the deck. Our dogs: holding it.

Where is the Arch, that gaping mouth? I want to see down its throat to a startup in California. But there is this cloud ceiling and pouring rain on the interstate. We’ll get there Sunday. In order to build suspense, I tell my son the Arch is so old, it was probably built by aliens, how else could it be done?  But no, he googles it instead, childhood magic searched away. “It sways,” he says. “Eighteen inches.”

Still, the storm, so the City Museum instead, a church in praise of American junk and tunnels. I’m not describing it right, but a kid is stuck in a tube many stories high and another is bleeding in the school bus suspended off the roof. Do you understand the place now? It smells like a lawsuit inside or like the inside of a helmet. Friends said it was a must-see.  Our kid gets lost, found, says, “Boy, was I worried.”

One of the purposes of a trip like this is to see the country. Another purpose is to bring the family closer together. My wife orders squid ink pasta, and I think, “I love this woman.” Under a placard announcing Yogi Berra’s birthplace, my son says, “Who the fuck is Yogi Berra?” He should watch his language, but I love him too. But what have I done that’s lovable?  Carried the luggage from the car into the spooky duplex? Killed the spider that had built a web across its door?

An old injury in my ankle is acting up, a surgery, all this walking. I have money problems. The job is a drag. Thirteen kids killed in this city this summer. This house is no hotel. On our last night, I can hear my heart in my ears.

Now the screaming Arch with the sun at its peak, the metal pill it swallows to get to the top and its small window. As a family, we decide panic is not worth the view. Mississippi the River, poet-killer, is blue-brown. The museum underneath is a grave for cowboys and Indians, and the gift shop is mobbed, so we’re headed back to Mississippi the State, which is green-brown. I told them the duplex locks itself.

Did we accomplish our purposes? We actually saw no ghosts as a family, and there is some regret. Speaking of haunted, I read somewhere that the deaf wonder if the sun makes noise, and are also disappointed.

Sean Ennis is the author of CHASE US: Stories (Little A) and his flash fiction has appeared in The Adroit Journal, Passages North, F(r)iction, and Queen Mob’s Tea House. More of his work can be found at seanennis.net