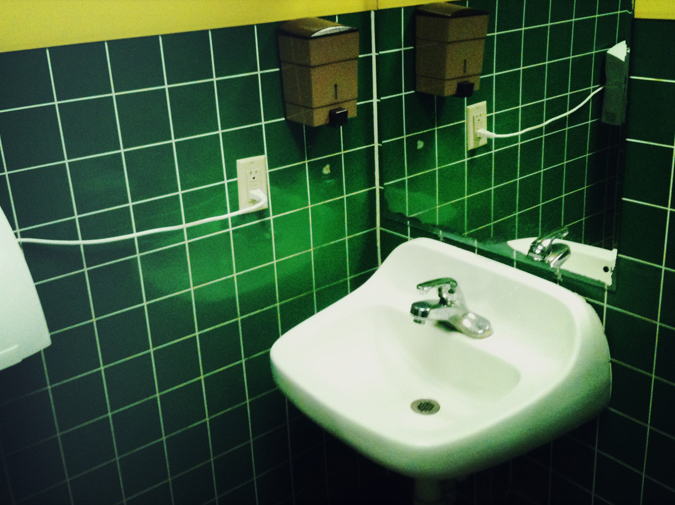 A little man in a boat paddles laps around a toilet bowl.  He is below her, waiting.  She is a normal-sized woman.  This little man and normal sized woman have an agreement.  She leans forward, lifts her bottom from the seat, reaches back and gently pulls out a tampon.

She used to complain that the bloody water would splash up and touch her.   This blood made her more nervous than any other kind of blood.  Then the little man appeared and offered his services.

The little man uses a net.  He extends his arms as high as he can and waves the net in the air.  It’s heavy, as tall as he is, nearly as long as his boat.  In the beginning the woman worried the man wanted what other men wanted, so she told him “no” the way she told other men.  But he kept coming back and he was so little, and he was willing to give her a free trial week because she seemed like a nice woman who wouldn’t take advantage of his size, and though she’d never heard of such a service it made good sense to her, so she took him up on the free trial in which he remained small and gentle, and then she hired him for five days a month.

The phone rings, but the woman stays near the toilet.  She has been ignoring calls from an old friend.  The friend leaves messages to remind her they’re both turning thirty-five this year and they should go through with their agreement, even if they initially agreed it was a joke.  He’s willing to relocate, and at this point children are totally optional.

The little man eases the tampon into the boat and starts to paddle away.  The woman doesn’t know where he goes.  She assumes he goes down the pipes and into the sewers and then up the pipes of the next client. But she never sticks around for his exit.  The woman tells the little man to stop paddling.  He always does exactly what she says except the time she asked him if her red dress would send a man the wrong message on a first date and the little man refused to comment.  The little man agrees to wait but points out that the phone is ringing.  The woman says it’s just another sales pitch.

The woman thinks of her dinner last night with a tall man she didn’t know and how her blouse and jeans, what it said to her date, what he thought it said to him, made the man ornery.  Or maybe that was just his way of relating to women. Some men are always mean to women.  Even his handshake was ornery.  The woman then asks the little man if she can shake his hand.  She feels strange that they hadn’t done so already. They are seven months into their contract, longer than she’d been with any other man.  The little man says of course but reminds her to be careful of the water.  I haven’t had a chance to clean it yet, he says.  The woman reaches into the toilet and shakes the little man’s hand.  Despite his small, delicate fingers, she is impressed by his strength.  She nearly tells him so but she doesn’t want to insult him or send him the wrong message.

The phone rings again.  The answering machine beeps, and a woman’s voice starts up.  It’s the woman’s mom.  She wants to know how her daughter’s date went; her eagerness is one part hope and one part worry.  It’s already the afternoon, her mother says, then breathes into the receiver for a couple seconds before hanging up.

The little man tells the woman she better go call her mom.  He can imagine what it’s like to be a parent with all the things that can happen or not happen or sort of happen.  The woman says it’s no big deal, that her mom just wants to find out if the strange man from last night had potential to be The One.  The woman says she would like to talk to the little man a little longer and for this she will pay him overtime.  She wants to know how big she looks to him, and he replies that she is an average-size woman.  She then asks what’s it like to get so close to so many vaginas? I bet sometimes you want to hit them or jab them with the handle of your net, the woman says.  The man says it’s just work, but I can recognize that they’re beautiful, though if I’m not careful I could find myself inside one.  But I’m very careful, the man says.  I understand what it means to be professional.  To be at someone else’s mercy.  But of course this can be very confusing to my clients.   The woman leans down and looks very closely at the little man. She sees specks of red on his yellow gloves and white T-shirt.  Even though it could be any woman’s blood, it doesn’t make her nervous seeing it on a little man.  The little man steadies the boat so it stays still and quiet.  He’s waiting for the woman to ask another question or give a command.  The woman is used to being the smaller one. She’s used to being afraid.  She’s used to walking away, to being ready to run, to running.

The woman reaches into the bowl, flings aside the bloody net, scoops up the little man, and in her palm takes him to the couch where once a man of nearly three hundred pounds tried to lay on top of her.