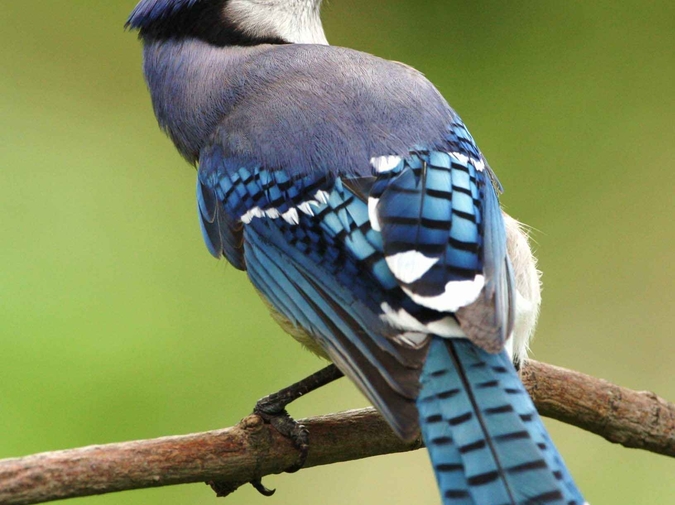 There was a single blue jay perched in the lemon tree outside my window. He knew that, soon, the fruit would turn from green to yellow, and he was waiting.

On my computer screen there was a photo of man, unfamiliar to me. He was wearing a tuxedo vest with an undone black bowtie, no jacket. His face was flush, like he’d been caught in the middle of a laugh or, maybe, he’d been drinking.

All morning, that image sat with me.

At the bottom of the page, it said: In lieu of flowers, the family asks that donations be made in Stephen’s name. There was a link to a charity, which helped young people struggling with addiction.

I went into the bedroom, got dressed. Then found my car keys and drove to the hardware store. They had a selection of birdfeeders. The most expensive was a replica of an old Sear’s Craftsman. The kind they use to sell in the catalogue. It had two stories, a bay window and a wraparound porch. There was even a fake plume of smoke rising out of the miniature chimney.

I put it in my cart, along with a five pound bag of black sunflower seeds, coated in a natural oil, which, according to the packaging, attracted a wide variety of birds.

Stephen’s mother was a nurse. She helped deliver my youngest sister. That was just before her diagnosis. When we moved from Jersey to Florida, she needed a cane, but was not yet in a wheelchair.

My clearest memory of her is after a blizzard hit the neighborhood and she told my older sister, if she kept shoveling snow into her driveway, she was going to go into her closet and get her shotgun.

The guy at the hardware store convinced me to buy a bag of concrete mix. He said, spending so much on a birdfeeder, I might as well install it properly.

When I got home, I picked a spot near the lemon tree. There’s an old oak tree on the edge of my property, its roots webbed under my yard. To dig a hole, I needed a pick axe.

I stuck the birdfeeder in the hole, poured in the concrete mix and soaked it with the hose.

While it set, I walked around the tree, checking to see if any of the lemons had begun to ripen. It was important to get them off the tree as soon as they turned yellow. Otherwise, the birds would peck holes in them, creating passageways for the bugs.

I opened the bag of sunflower seeds and tasted one. It had no flavor. I didn’t see how they were going to compete with the lemons. The sugary lemons on that tree, they are hard to resist.

I went back to the birdfeeder and felt the concrete. It was solid. I covered it with a layer of topsoil. As I was shoveling the dirt, it occurred to me that the birdfeeder looked a lot like a bungalow my wife and I used to rent.

Michael Cuglietta is the author of the forthcoming short fiction collection, The Feast of Jupiter (Little Island Press, 2019). His work has appeared in NOON, The Gettysburg Review, Egress, and elsewhere. He is also the author of the chapbook Clams in White Wine, which can be purchased here: https://mcuglietta.bigcartel.com/