Brad Listi talks psychedelics, quitting Twitter, and his novel, Be Brief and Tell Them Everything 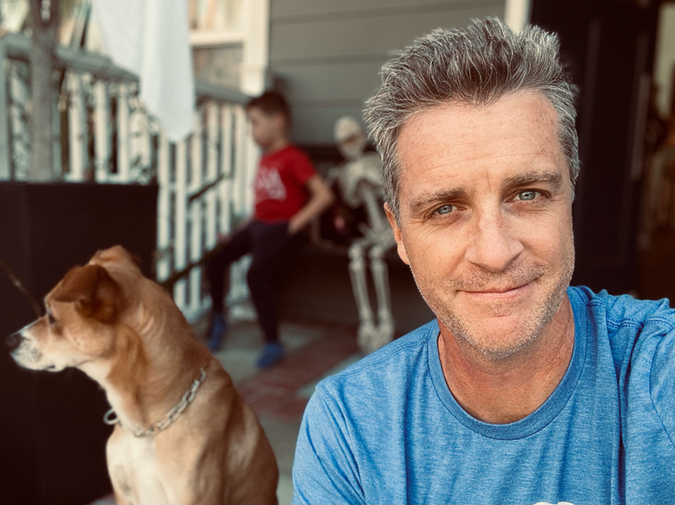 I think I met Brad Listi in 2009 or 2010. He and his wife came to a reading I had at Book Soup in LA. Since then, I’ve enjoyed listening to probably 200+ hours of his literary podcast. I’ve also been on his podcast many times, emailed with him around a hundred times, and met his daughter and dog. Brad’s second novel, Be Brief and Tell Them Everything, is a funny, entertaining, moving, serious, tender, and contemplative book that, in my view, lives up to its title. I interviewed Brad by email.

How does it feel having your second novel come out 16 years after your first novel?

It feels a lot of different ways. It feels good. It feels like a relief. It feels overdue. It feels embarrassing that it took so long. It feels somewhat unnerving, as the book is pretty personal and leaves me pretty vulnerable on the page. It feels like a meaningful personal achievement, considering how hard it was to write and how much I failed along the way, and how much difficulty there was to endure in the midst of its creation.

To me, it seems original and interesting to have a large gap between one's first and second books. Since your new novel is very autobiographical, you were able to put everything in that gap into your book. If your novel was titled Tell Them Everything it could've been more than a thousand pages. Instead it's—much preferably, in my view, as an appreciator of shorter books—a tight 220 pages. What was the process like of deciding how long your book should be?

A lot of it was intuitive. Some of it was a matter of taste—I also appreciate shorter books and really revere compression in literature. The rest came down to trial and error. In earlier iterations—and there were several—I would often go too long. The writing would be fine, but I’d overdo it. Particularly in a book like this, where trauma is a part of the narrative, I found that it was better to be judicious. If you carry on too much, it can become exhausting for the reader. You think you’ve painted some big magical sad scene, but really you’re just bludgeoning people.

One of your ways to condense was to select, for example you wrote about 4 out of 500 episodes of the narrator's podcast—episodes with Lynne Tillman, Tim O'Brien, Brad Phillips, Matthew Zapruder—and one out of the narrator's wife's five miscarriages. What were some things that were hard to decide to include or not?

The health-related stuff was probably the most difficult. This book is a work of autofiction and draws on my personal life pretty heavily. I had to make judgment calls about how much to include when it came to things like miscarriages, health situations, and so on. I tried to be as truthful as possible without getting exploitative. But really I didn’t withhold too much. In the end, it’s a novel. You have to give yourself some license. And at its core, it’s a book about candor and creation and intimacy and talking about things that often go unsaid. It’s a confessional narrative. I was trying to write with urgency and make myself vulnerable on the page.

And here I should underscore, again, how long I lived with this material, how many failed drafts there were. By the time I got to the endgame, it was almost all intuition—what to put in, what to leave out. I didn’t have to think too much about it. By that point I had a pretty clear sense of where things should be.

Your novel ends with a carefully planned psilocybin trip, in which your narrator uses psilocybin alone in a house, blindfolded. Oprah Winfrey appears during it, and later your narrator goes on a walk with his dog, noticing "how garish and alien" everything seems. I liked these thoughts he has: "A few blinks ago, I had been a boy in Milwaukee, ice-skating on a frozen creek, playing hockey, wandering through the woods with my buddies, in search of arrowheads. And soon enough, with some luck, I would be a tired old man, mottled and wheezing, careening toward infinity, wondering what the hell had happened to age 42. I could expect no less." I know of other books that end with psilocybin trips, including my novel Taipei. Do you know of any others?

That’s a good question.  Off the top of my head, I can’t think of one. But surely there are plenty. Most of the psychedelic experiences that I’ve read about in works of literature tend to be referenced in passing or treated as jokes. A person will eat mushrooms at a party and think that she’s a koala bear or something. The trip that I was trying to describe was more complex than that, much more emotional and involved. Maybe it’s because it was at a higher dose. Maybe I’m just middle-aged. I don’t know.

I guess I’m of two minds when it comes to psilocybin endings. On the one hand, it can seem like a natural thing to do. The experience is so shocking and strange. Inherently dramatic. It leaves a deep impression. On the other hand, psychedelic trips are notoriously hard to language. Maybe this is why we don’t see more of it in literature. The psilocybin section of my book was definitely the most challenging part to write. Very technical, very slow-going. Trying to render it clearly and authentically while also making it palatable to readers who might have no frame of reference. It felt like fraught territory, an easy place to screw things up.

At any rate, I’m glad that my book shares this in common with Taipei, which I’ve read and really enjoyed. Surely it was instructive to me in some way. I’m also now wondering about these other books that you’ve read that end with psilocybin trips.

An unpublished nonfiction novel by Alan Rossi—Our Last Year—ends with Alan using psilocybin with his wife, and I heard that Chelsea Martin's Tell Me I'm An Artist has a psilocybin trip near the end, or at least a draft of it from ~1.5 years ago did. Your psilocybin trip was different because you used Johns Hopkins University's template for psilocybin research. At Johns Hopkins people were dosed in comfortable settings with sleep masks on for the duration of the trip. This puts the focus on visions and on the non-material world. "As the experience continued to materialize, my mind space began to morph into something more visually sophisticated, taking on a distinct three-dimensional quality," you write. The psilocybin trip was one of my favorite parts of your book. Did Terence McKenna have any influence on it?

Yes, absolutely. I was exposed to McKenna a bit in college in the mid-1990s in Boulder, where he had an enthusiastic public, but I didn’t really delve into his work until, I think, 2010 or 2011? It could be a year or two in either direction. I’m bad with dates. I do remember noticing at the time that you were listening to him, too. I want to say I wrote to you back then and said as much. It felt like a strange synchronicity.

McKenna was such a wonderful, lucid talker—so learned and funny and literate, so radically insightful. He helped me to bridge the divide between the more ungrounded, haphazard psychedelic experiences of my youth and the more considered, high-dose trip that I describe in my book.  He got me to take psychedelics more seriously. I listened to dozens of hours of his lectures or watched him on YouTube. I read several of his books—Food of the Gods, True Hallucinations, The Archaic Revival. I remember reading your excellent series on his work for Vice, your book Trip, books by Michael Pollan, Daniel Pinchbeck, and others. I watched several documentaries, listened to a lot of podcasts, read a ton of stuff online. All of it helped to give me a foundation, deepening my interest level and understanding, and so on.

Another of my favorite parts of your book were the pages on quitting Twitter. "For ten solid years, I had willingly participated in what amounted to a massive, unregulated psychological experiment, the safety of which was far from clear. I couldn't help but believe that it had done some damage." I remember when you quit. I heard you discuss it a bit on your podcast. How long ago did you quit, and how has it been since?

I quit Facebook about ten years ago and then left Twitter about four years ago, I think. I'd been toying with the idea for a while. I had a lot of bad feelings about social media. I knew that I was addicted, and it didn’t sit well. It was making me scattered and agitated, and so on. And I was tortured by the idea that I was working seven days a week creating and curating content for this corporation, for zero money. I had essentially made myself a willing slave. It seemed crazy. Twitter owns the rights to all tweets in their terms of service, I think. Not to mention I was handing over my data, free of charge. And so finally I got fed up with it—got fed up with myself—and quit. And I feel like I’m better off as a result. It lowered my stress levels. I’m able to concentrate better. It’s no accident that I finished my novel after pulling the plug. And I now read a lot more books than I used to, which feels like a real benefit.

I should emphasize, too, that I’m only speaking for myself. A lot of people seem to be able to manage social media just fine. They use it twice a week or whatever, making jokes with their friends, taking photos of their brunch. That wasn’t me. I was on Twitter constantly, hourly, compulsively, probably fifty times a day or more. It was obnoxious lab rat behavior.

These days, I still read Twitter a bit. To me it can function as “the internet.” I'll go to it and scan various lists and so on, keeping up with the news, in the way that I might have surfed the web many years ago. But I don’t tweet. I don’t create content. I don’t have a personal account. My podcast has social media feeds, but my friend Joseph Grantham does most of the posting for me. I try to stay out of it. It’s a better arrangement, and it helps keep me focused on more meaningful things.

That sounds good. I hope your book inspires more people to use social media less. What are some more meaningful behaviors you’ve been enjoying lately?

Doing nothing is good. Just sitting there. Lying on the couch. Resting. Ideally taking a nap. This is underrated, and it’s not as easy to do as it should be. Part of my problem, I think, was that I was too busy all the time. And I was busy with tedious, unnecessary things.

And then aside from that, there is, as I mentioned, the increased reading and writing, which are meaningful to me. I hang out with my family. I talk on the telephone more than I used to—extended conversations with friends, which I used to do all the time, back in the day, and then stopped doing for many years after smartphones took over and everything moved to text, and people, myself included, got “scared” of talking on the phone, which seems ridiculous in retrospect. I hike a lot with my dog, or take her on long walks in the city. I ride my bike around. And when the weather is warm, I go boogie boarding. I also meditate a fair amount and listen to a lot of Buddhism-related podcasts.

Tao Lin is the author of Leave Society (Vintage, 2021) and nine other books. He edits Muumuu House. Find him online at www.taolin.us.