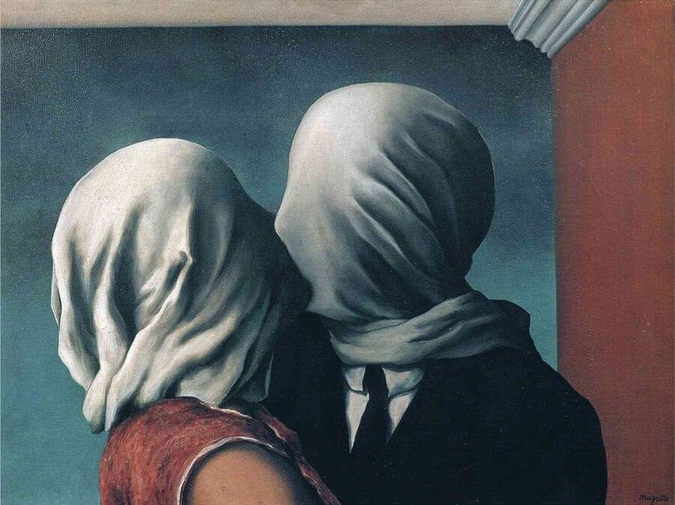 When he saw Charlotte’s smile in his mind’s eye, Dudley lost his head, like a hat a young fellow takes off and tosses to the hat-rack with the head still in it. He stopped the thought of her just before her black lips drooped down and covered her teeth again. She’d stay right where she was, upside down or right side up, in her brown flowered pinafore, sweetly swinging on her swing. He still had work to do. But

clack. Clack. He couldn’t concentrate. He watched his own reflection in the five-ball bang-parade pendulating on his desk. Newton’s Cradle mirroring his hair, perfectly in place, and his shirt collar gleaming nice and white. Now there was a fellow who could get a girl. He watched the convex men, all five of them, who would call her as soon he got home. He opened his briefcase, looked at its empty leather innards, clicked it shut, and hurried home.

He called loudly into his empty house, “I’m home” for any would-be burglars lurking. He took off his blazer and fit his kitchen chair into its shoulders, nice and neat. He poured himself a gin martini and filled the Mr. Peanut lid with salted nuts. He dialed his green telephone, which hung on the wall, and listened to it ring. Saw her smile in the silence. He wound his finger in its cord. When she answered, her voice sounded like a yellow tulip.

“Hello, Charlotte.” He matched her tone.

She replied, “Who’s this?” her tenor drooped to darkness. He knew she wore thick, blackened eyebrows.

“Oh…” Dudley simply said. His siren started and he saw his kaleidoscope, sight and sound, piano pounding, lamps and fans and lightbulb chandeliers. A young fellow he had known popped up, and possibly a parrot, squawking.

“Who’s this?” She demanded. Her eyes completely black. She threw her straw hat across the room and it stuck right to the wall, beribboned, rather festive. Dudley felt a new word bubble up, but it got stuck. He watched her warble in and out, ebb and flow, one clacking metal ball against the next. Organ music swelled, urging him to talk to her, but as always, he had so much going on. He imagined her looking down her phone line, coil after coil, finally seeing only Dudley’s chin and earhole. He felt like an interloper in her hall.

“Oh,” he said again. The moon came out, riding on a motorbike, his head hatted, silver-blue, attached. And leather boots. It pumped its glow upon them both.

“I’m going to hang up now,” Charlotte said, “unless you tell me who this is…”

Dudley’s heart a pendulum, lub-dub-up, lub-dub-down. He’d eaten all the peanuts. He cleared his throat and stuttered, “D-don’t you know my voice?”

She was silent for a second. And then, “Will you take me to the oil rig?”

“We’ll drink wine and watch it work. Have you ever sat inside a spinning top?”

“No…” He clinked more peanuts into his metal lid.

Her xylophone eyes went striped and wild for a second, and then fell dark and peasant heavy. Sack of flour on her shoulder, climbing old stone stairs. “Dudley, I implore you, come over here and take me now.” She panted, hauling flour up the stairs. The stairs. This would be her heavy life.

He popped a peanut in his mouth, his fistful held aloft, his fingers working to release another.

She said, “Come now. Ride a leather bridle.” Her voice was velvet honey buttercups. She had become much more than he had wished. A nymph. A harp ... A poison dart harpoon.

“Drums and cymbals. Ladles. Pans. I’m wearing flowered garters. I have many legs. I … I took off my hat.”

He poured another lid of nuts.

“I snap back, my body is connected. You’ll smell me in the school bell. Hurry, on the trot.”

He heard her deep inhale and suppressed his sense of ending long enough to let his smile rise. He returned his telephone receiver to its avocado cradle. Refilled his drink to settle in, quiet once again, and alone.

An American-Brit in Switzerland, Nancy Freund is always hard at work on a novel, but she also loves flash. She has published pieces at Largehearted Boy, Necessary Fiction, and BloodLotus Journal in the US, and journals in six other countries. She has Creative Writing degrees from UCLA and Cambridge. She’s on twitter @nancyfreund.