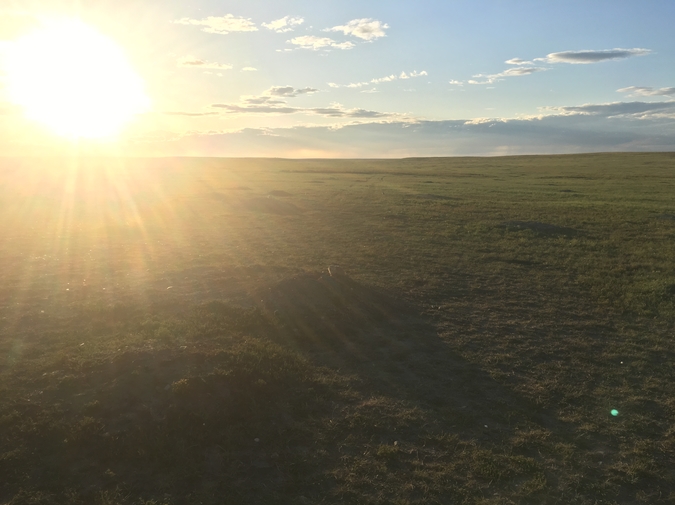 I creaked down the stairs of my Victorian row home at the crack of noon to ask Xander—a Canadian poet and e-friend who’s been crashing on my couch—if they wanted to go to the beach. They waggled a green coif of hair as their head, shoulders, and knees bounced in agreement. We crammed everything we needed into a single backpack—water, a Nikon with a Canon lens cap, notebooks and sketchbooks, an unused red inhaler—and nothing we didn’t—towels, sandals, sunscreen, or a single thing to eat.

We piled into my car—two pretentious artist types with asymmetrical haircuts, each in our own liminal spaces, of a sort. Xander began testosterone injections back in June, and is now adjusting to the cracks in their voice and sweat on their upper lip. I am at almost two years on estrogen, crossing from the excitement of possibility to the daily mundane. I drove ignoring the orange “Maintenance Needed” glowing on my dash. They rode shotgun, describing the scenery. According to Xander, the trees were green, the marshes were green, and the highway-side grass, infested with ticks, was green. I shot them a look and pressed the gas breaking the speed limit toward unseen wilds, or at least the kind New Jersey has to offer.

On the trail from parking lot to Higbee Beach we crested a duney hillock lined with spindly bushes taller than myself. At the peak, the forested lower half of sky split on itself, revealing the coast like an inverse funnel—sea growing wider, the path straightening, the funnel terminating in a glimpse of sand as we loped, shoeless, toward the water. I had a moment. You know the kind—one of those Wordsworthian bits of navel gazing transcendence. Higbee Beach, whose achromatic waters stretch away to a disappearing point where, like a 2000s era love song, the North Atlantic and Delaware Bay collide, is a liminal space. It is not a threshold, but the blurring of one. It is enmeshment—different spaces, thoughts, feelings, people, universal truths and the like becoming indivisible. It is naked process. It is where a forest, bulleted by copse-topped dunes, trades a pine floor for the seafloor, and I am getting hungry. Separation does not occur in a liminal space. Where feldspar and volcanic rock are still being ground to sand, they fringe rolling breakers, which inch up an already thin strip of shoreline.

We spent most of the day hunting rocks— some smooth, tumbled by undercurrents, others gnarled like the head of a molar. When Xander called me over I thought they had found another composite of black and red layers mixed with something artificial, like concrete. Instead they found a mottled-brown husk, which once belonged to a horseshoe crab. We plucked six barbs from its tail, and turned around to a pile of bodies sun-baking under trees turning autumn in odd patches—more crabs. We sat in a moment of silent mourning. A bird chirping out upslurred notes and insect stridulation grinding out music blurred into an undersong so different from the grid-laid city’s. That night I’d learn horseshoe crabs have no concept of a graveyard. What we had found were only discarded shells.

My mother reminded me often as a child that I can be dramatic and prone to anxiety, always assuming the worst. “Why are you so paranoid? You always think I’m out to get you,” she once said, in a hot SUV with hot saline dripping down her chin. The week before Xander arrived I had read a bit of Douglas Adams’s and John Levitt’s The Meaning of Liff, so I spent most of our rock hunt worried about collecting a glassel. A glassel, Levitt and Adams write, is “a seaside pebble which was shiny and interesting when wet, and which is now a lump of rock, but which children nevertheless insist on filling their suitcases with after a holiday.” On that previous trip with my mother, I had collected no glassel.

Or maybe I did. I grew up two hours from the Jersey Shore, and my memory has burned away like so much self-medication. My family took monthly summer drives to Belmar, Ocean City, Seaside Heights, and nameless patches of bare coastline sand—anywhere to safely avoid each other. A story doesn’t need accuracy to be true, and if I had known the word back then, maybe I would remember. I didn’t, so glassel didn’t exist.

In the same way that memory becomes material through storytelling, objects can become real (or at least seen) by their naming. Before I had the word, my internal world and part of the external world existed at an uncrossable threshold, which is now bridged by glassel.There must be more gaps like this, and like grains of sand, they are uncountable. It’s uncomfortable, knowing my world will always be incomplete, with the real world and mineboth overlapping and intertwining just outside my range of perception.

Humans, dependent on intelligence and tool mastery for survival, do not tend to leave the unknown be. This is both our strength and the burden we carry. We persist to solve problems across generations and finely limn the boundaries of existence with our speech, but we are always playing catch-up with nature. There is a universe of existence we have no words for, and maybe that is why we sequester ourselves in naturally quarantined cities: fear of the unknown and unintelligible. We don’t stop to wonder if we are intelligible to the rest of nature. We believeourselves the only beings capable of language, but trees communicate using scent, electrical impulses, and even sound.

In The Hidden Life of Trees, Peter Wohlleben argues that trees not only communicate, but do so purposefully. In almost every case he presents, tree communication is tied to some need such as food or safety. If we want to relearn a natural communication, this is an example to follow. That is, we address our needs as a species in a way that addresses the needs of the planet. We care for nature so that we can trust it to care for us. In the war against climate threats, oil is not the enemy, but those who extract it are, and I am still hungry.

The sky over Higbee is now as gray as the water. I don’t know where either really begins. Xander is pulling on their socks as my stomach grumbles, and I search online for something to eat. I am pickier than a twelve-year-old, and I’m looking for the cheapest, most generic, most American diner possible. I am aware of my hypocrisy. I am not apart from humanity and am afraid of the Unknown. I, too, have grown used to the idea that humanity is separate from nature. To reconcile society and wilderness is to redefine what makes us human, and to reorder ourselves entirely. We are hindered by our discomfort with liminality: that which is either/or, both, and neither, and which is not just unknown, but unknowable. Google tells me Point Diner is three miles away, and it looks perfect.

Xander and I slide into opposite sides of a vinyl-cushioned booth. I order a hamburger—no toppings, medium well. Xander gets cheese ravioli with tomato sauce. Having only brought two water bottles for our trip, we down cup after cup of turbid water in spite of its metallic tang. They’re telling me a story about the future (their future, that is), but I only hear white noise. The GPS says we’re about an hour from home, and I look toward the bathroom alcove, contemplating the stick figure on either door.

Katbug is a nonbinary trans woman studying creative writing in Philadelphia. Through poetry, she explores the spaces where mental illness and trauma meet the body, and how to find agency within them. She is the 2019 recipient of the William Van Wert award, a Diamond Teaching Fellow, and owns five swords. Find more of her work at Bedfellows, Voicemail Poems, Theta Wave, YesPoetry, and elsewhere.