A Favor for The Dude 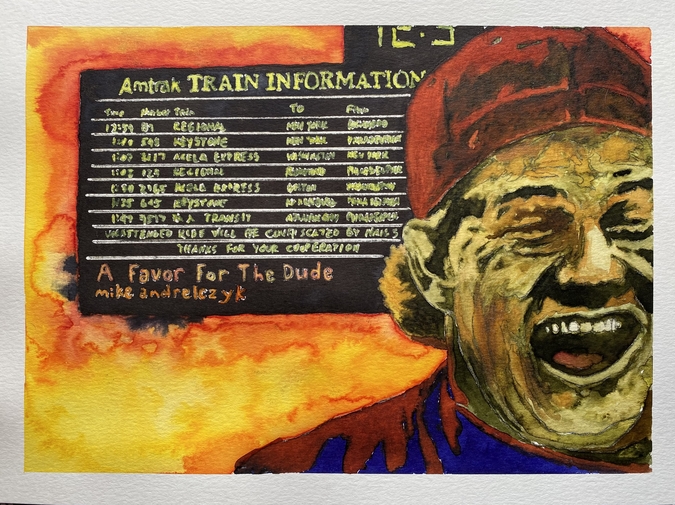 My brother and I were standing outside of the 30th street station in Philadelphia.

I forget how old we were but we were old enough that our mom let us take the train alone from Lancaster to Philadelphia and catch another train from Philadelphia to Wilmington to meet our aunt.

She let us do it but she was also pretty nervous about it.

There was some time between trains and we went outside most likely because my mom specifically said we were not to leave the station.

At the time, our big vice was stealing the tire valve caps off luxury vehicles and putting them on our bikes. We called the caps chromies.

BMWs were good for this because the caps were made of metal and had the BMW logo on them and they looked cool on our bikes.

We made it a game. We’d go out at night and run around our neighborhood and see who could collect the most chromies.

The car tires were all stripped for blocks around our house.

So we were out in front of the 30th st. station scanning for BMWs to steal the caps off of while we waited for the train to Wilmington.

We saw a silver BMW pull up and park in like a sort of temporary pick-up zone. We both saw it at the same time.

A short, but athletic-looking man wearing a pink button-up shirt and jeans came out of the car.

“I think that’s Lenny Dykstra,” I said to my brother.

We watched him walk into the station.

“We should steal a chromie from his car,” I said.

My brother acted as lookout and I walked up to the side of the BMW and pretended to tie my shoe. I looked at my brother.

I unscrewed the cap and pocketed it.

This cap automatically became the crown jewel of our collection. The chromie from the car of the centerfielder of the Philadelphia Phillies. Ripped straight from The Dude’s BMW.

We walked quickly back into the station. Savoring the fleeing-the-scene-of-the-crime moment. Then equally enjoying the blending-into-the-crowd-of-anonymous-travelers part. We had successfully pulled off the biggest caper of our criminal careers.

Eventually the thrill wore off. We sat on a bench and waited for our train. There was not much to do but look at the other people. My brother played Tetris on his Gameboy.

I got up and walked over to the arrival / departure board to check on our train.

Someone came up beside me.

It was Dykstra. The Dude. Nails.

He was looking at the board. Like he was puzzling whether the next pitch would be a slider or a fastball.

“Are you Lenny Dykstra?” I said.

I looked at him for a second. He somehow lost his baseball star glow in that moment.

“Well, you just look at the Washington column and go to the 11 row and follow it over and there it says the platform.”

What a dumbass, I thought to myself. I reached in my pocket and felt the tiny weight of the piece of his luxury car I’d stolen.

Then I went back to the bench and my brother and I put our backpacks on and headed to our platform.

I told my brother how I helped Lenny Dykstra find his train. My brother laughed.

“Haha, what a fucking idiot,” he said.

“Who’s your favorite player on the Phillies?” I asked.

We stood on the platform for a while eating some M&M’s and then we boarded the train to Wilmington.

Mike Andrelczyk is the author of Gateway 2000 & Other Poems (Ghost City Press, 2020). He tweets at @MikeAndrelczyk and posts his paintings on Instagram at @mike_andrelczyk. He is a Phillies fan.