A Comprehensive History Of Me In Terms Of Dancing 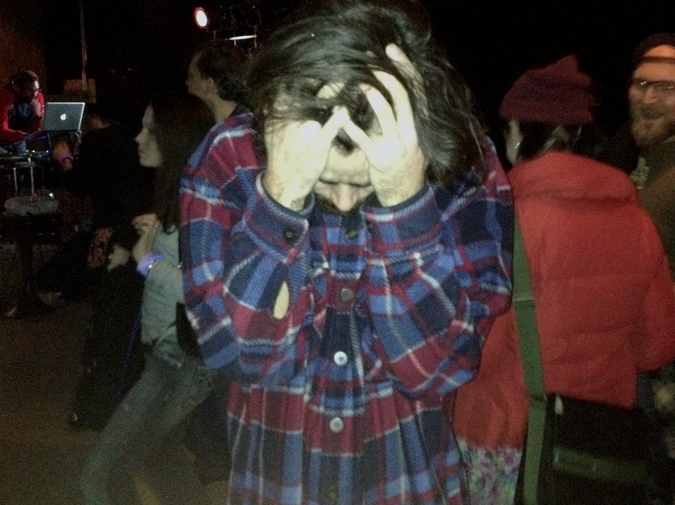 Ages 0-8: Probably danced, or something like danced, a number of times, but have no memory of this.

Age 10: Wrote an essay for school about how I wanted to be a rapper when I grew up. When I got home and told my dad about it he said "Rap for me" then lay in my bed while I rapped "Lose Yourself" by Eminem for him. When I finished he told me I needed to "get into it more, not just stand there with [my] hands in my pockets."

Ages 12-13: Attended Bar/Bat Mitzvahs and 13-year-old birthday parties where there was music  - oftentimes via "Rock The House," a bleak-seeming family-friendly entertainment company in Cleveland - and where people danced. I remember being at a party at a country club and watching people "grind" and telling my friend Jake that I didn't "get" grinding. I remember being at a party in the banquet room of a fancy hotel and watching "Baker 3" on my friend's iPod while people danced then taking part in a "food fight" where people threw silverware and food at each other then destroyed a bathroom. I remember stealing envelopes from a table with gifts on it with a friend at a birthday party while people danced to a band that we were using as our distraction then using all the money we stole to buy eggs and pay his sister to drive us around while we egged the houses of people we disliked.

Ages 14-17: Started playing music in a punk band called Positive. While playing, I'd sometimes dance by moving my head in a less-extreme version of "headbanging" and moving my body in a flailing motion, sometimes jumping. I remember a choreographed "move" we did when we were ~14 that involved me and the two guitar players lining up so that our instruments were pointed at the audience then moving them to the right then left, repeatedly, in unison. That and once when I pretended to "butt fuck" the guitar player with my bass guitar are the only times I can concretely remember dancing in any manner that wasn't the aforementioned headbanging/flailing.

I also started going to a lot of house shows where people, including myself, generally danced by hitting one of their hands against their chest and moving their heads in rhythm with the music.

Ages 18-20: Vaguely remember dancing once or twice in friends' apartments, however I mostly remember feeling a steadily growing aversion toward dancing. I remember going places where there was dancing and doing and/or selling drugs while sitting or standing. I remember having a negative perception of males who danced due to listening to gangster rap where males who danced were used as examples of "softness," I think, and also as a means of protecting myself emotionally against my fear of dancing. Dancing began to seem increasingly insane and belligerent to me. I said things like "I don't dance" to people who asked me why I wasn't dancing.

Ages 21-[Now]: Began going to "Secret Soul Club" - a dance party thing in a room in a shitty bar on the east end of Lakewood that happens on the last Friday of every month - with friends. The DJ - a scrawny middle-aged white man with "wild" hair and a vaguely classic rock aesthetic (ripped blue jeans, a band t-shirt with the sleeves cut off) - played "classic 60's soul" style music while ~60 predominately white hipsters danced in a manner that seemed, and still seems, "innovative" and "damaged," to me, in the context of other types of dancing, via [I want to say something re "whiteness"] and "insanity."

The first few times I went to Secret Soul Club can be pretty much summed up by this tweet, which I tweeted the first time I went there.

I started feeling less insane after trying different mental "tricks" - viewing myself as a caricature of a white 20-something who was dancing, viewing dancing as a small goal in terms of the larger goal of my girlfriend to continuing to like me, viewing everything as arbitrary and dancing as a way of embracing that arbitrariness, viewing dancing as a way to gain experiential value, etc. - but ultimately couldn't sustain any feelings of normalcy for any length of time.

I had fun in the small, ego-deflating moments when I wasn't thinking about how or why I was different from the people around me and was moving my body in ways I would usually view as "insane." I enjoyed seeing my girlfriend and friends dance. I liked, however detachedly and fleetingly, feeling more a part of my surroundings than usual, and by the end of the night felt bummed that I didn't have longer to get acclimated to dancing.