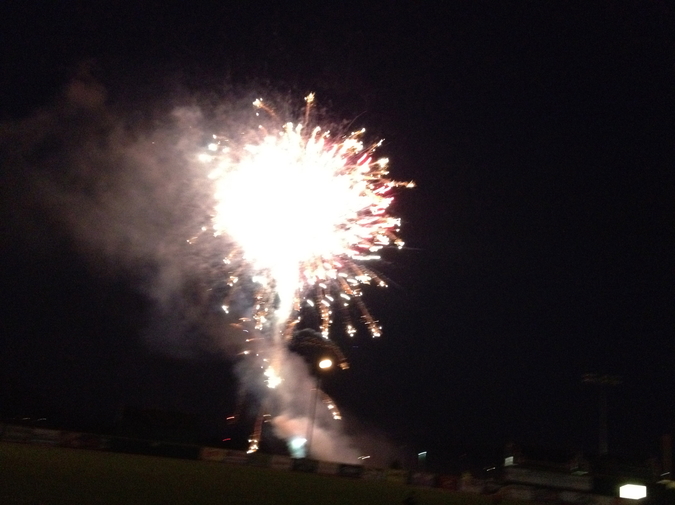 Someone overturned
the cooler and the dogs
licked and chewed
the ice. Oh it was so hot

under all that fur
and their tongues and teeth
ached with the cold. In the dark

the matches flared,
the sulfur curled itself
into everyone’s clothes.

A swarm of mosquitoes
and our skins bloomed

with bites. We sent the dogs
inside for barking
too loudly at the noise, but oh

to bark too, the air
wet hot
moon exploding
above my head
my body humming
a sudden chill—

I left work
and walked down Prospect
past the Long John Silver’s,
the Mexican place, the Jiffy
Lube, the gas station, the liquor store
where, in the parking lot, a man
held his woman by the wrist
and steered her into the frigid
bounty of the shop. She could
barely stand. She sprawled,
belly down on the counter, laughing.
At the light a man rode up
on a bike and looked me up
then down. Baby my car’s
in the shop, but if it wasn’t
I would take you anywhere
you wanted to go. I thought
of the gas station, the cold
of it, the fluorescent donuts
in their case, the rows
of colorful flavored gums
with heavenly names.
I once walked in there
to buy a pack of gum
and stayed for an hour.
The impossible choice.
The mango pineapple oasis,
the waterberry splash.
The cool mint melondream
breeze. So I jumped on the handlebars.
Down Prospect, the fast food
joints just fast rainbows now,
I could see the way cumulus
clouds of fry grease hung above
the places like the threat of a storm.
Faster and faster now the trees whipping
by in a fury of green. The city,
the highway, the exhale of farms.
Orange sun setting like a sick egg.
And into another state altogether.
No one knows us here he said,
and I held him tighter (I was on
the pegs now), while we ghosted
slowly through humid neighborhoods,
warped houses that teemed
with dead cars, with guinea pig
colonies, with wan families
and their mashed potato dinners.
We set up home. We made Wednesday
night spaghetti night. He rode
his bike for pay and in the mornings
out back I tended to the guinea pigs,
their bodies moved through
the high grass like tiny housecats
stalking their prey. They were untame,
majestic. They were a horde of mouths
under the house. At dawn I saw them
teeming the ceiling. They’d scatter
like bugs when I got a glass of water
in the kitchen. They were dear to me.
And then one day the wind came
in the house. Nothing stayed put.
The papers, the pigs, the furniture began
to beat at me. Tornadoes in the kitchen,
tornadoes of fur and plates.
We have to leave I said. The wind
is in the house. The wind is
the house. Everything is wild
and cruel. So he got his bike.
Past the grey houses, the cold lawns,
the dead cars, the wan little girls chalking
up the street. The pigs fanned out
behind us, a furry retinue. But in the end
they flagged. Short legs.
Past the city limits, the moneyed suburbs,
the miles and miles of inedible corn.
Where are we going now he said. Nowhere
I said. They’re still behind us I said.
Keep going I said Faster, faster
It’s going to be great. It’s going to be
like nothing you’ve ever seen.

Why they are Hungry

They are on one of their dusk walks again,
the weird sky not-mountain, not-cloud, everything purple,
and the cool night chilling the concrete.
The windows of every house are bright and buttery
and open to them from the dark street.
They catch the colors and horrors of everyone’s
lives, the town’s curtainless evenings. In the night,
they become unpersoned, slip from themselves
in the shadows and silence and ghost
the blocks together, holding hands or single file
or serpentining to avoid the shout of a dark dog,
a root shifting the tectonic plates of someone’s
front walk. The sharp windows framing the life
of a home in a perfect, rectangular glow:
a slack man, eating popcorn, watching the jewel
of a T.V. Tube-socked feet sunk into lakes
of plush carpeting. A window seat with obese pillows.
The tongue of a dog. Beyond the man, the shadowed
kitchen: waxed and at rest, poised. They walk to the end
of the sidewalk. The road gone into a confusion of grass,
the town bordered by the scream of the highway.
They turn. Look, she says, and they stare. It is a house,
but the wall inside is alive, blue. A swath of stained glass red
like a glimpsed cardinal in a bush. Large, fragrant
plants populate the yard, grow round and protective.
They cannot see who lives within. They have to leave
the sidewalk to continue. In their own apartment,
the dinner dishes crust and a fine layer of hair rings
the bathroom sink, as if the sink has suddenly grown
the ability to cultivate a beard. Out here they are children still,
stopping at each house with their open, empty hands.

Katie Schmid is a graduate of the University of Wyoming’s MFA program. Her work has appeared in Quarterly West, Hot Metal Bridge, MOJO literary magazine, Best New Poets 2009 and online at The Missouri Review. She lives in Illinois.

Shadows on a River is an band from Illinois founded by David Henson. Their recordings are available at Shadowsonariver.com.

"Nowhere" was previously published in Issue 4 of MOJO.