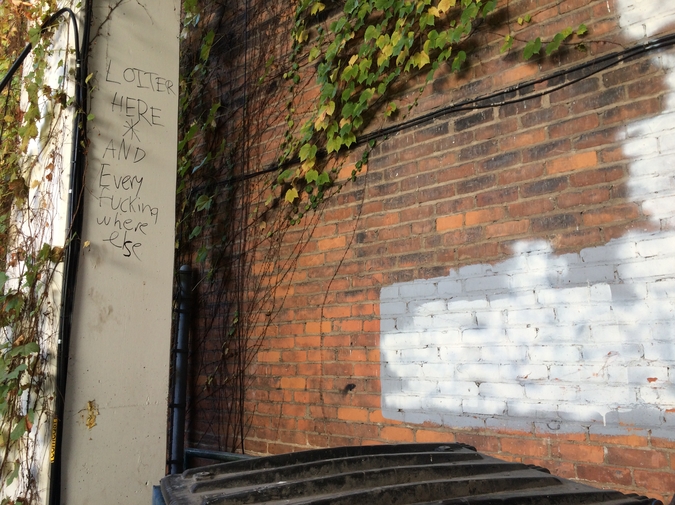 Place the palms of your hands side by side on this wine glass. After a short time, raise your hands and place your eyes at the same level as your palms.

Notice the possible and coincidental one of many ways your life slows down in situations in which Google’s self-driving car cannot or will not.

Let me talk about my ideas. An occurrence or part of an occurrence is recorded and played back. Do and/or don’t do something universally with your hands. Announce that fucking me took place on my period. I sit down on your face from 7pm until 8:03pm and think about all the people in the world who may be doing this.

Games to Play on My iPhone I

Two persons are situated in a room. One of them pronounces the letter ‘A’. ‘A’ is for Apple. Not the fruit, but the corporation. The person who started with the sound ‘A’ is only allowed to pronounce the sound ‘B’. ‘B’ is for Beyonce. Not the singer, but the French national motto: Liberty, Egalitie, Beyonce. The other person (me) is only allowed to pronounce the sound ‘C’. ‘C’ is for Escape. Not the yacht inside which we have met twice, but The Wide Sargasso Sea, The Wine-Dark Sea, The Old Man and The Sea, The Sea, The Sea, my home by the sea.

Janey Smith is the writer of two chapbooks: The Snow Poems (NAP, 2012) and Animals (Plain Wrap Press, 2011). An editor at Metazen, his work appears in Bookforum, Frieze, The Fanzine, HTMLGIANT, and in the anthology 40 Likely to Die Before 40: An Introduction to Alt Lit (Civil Coping Mechanisms, 2014). He hosts Live at 851, a reading series. He lives in San Francisco, California.