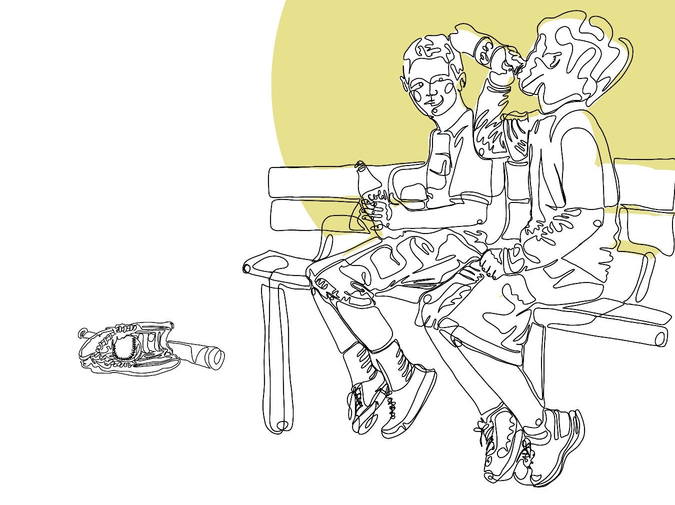 The Last Ballplayer Leaves The Field

What’s a fence anyway? & a line between here & there?
& what of a cork wrapped in yarn until it becomes a ball?

on a door you once left open — what if the sound itself
was real? Wasn’t it? & what of the time, on bring-your-pet-day,

dart between the players like someone who knew better
than them how to play a game? A game, they always said,

& what of that? & what of all the times you said I just missed
& sorry I missed that & it slipped past & I wished I had

another chance? What of longing, if longing is a game?
& what of love? & what of the dimensions of a place,

& how it changes you, the way one field’s warning track
was another’s home run, the way you knew how many steps

it took to get from your childhood bed into your father’s arms,
which are empty now, like a field after the lights have turned off,

the grass no longer green, no longer anything, just a borderless
plain upon which the stars go out for dinner, a place as wide

for a short time because nothing lasts forever? & what of
how it seemed when you were a child, & the point of a game

was the introduction of sense into the world, like the night
you woke up shivering & your father said it’s just a dream,

& the way that meant something, to have a name for fear,
even if fear felt as aimless as growing old without knowing

how to wash your clothes? & what of how a man can seem
as invincible as a forest until it is burnt alive? & what of

the tenderness of an embrace that feels as close-to-gone
as dirt overflowing a palm & running between your fingers?

& what of how your father took you out the next day
under the same sun as today, which is so many years from then

& how you guessed, & how he swung, & how the ball went farther
than you guessed — so far, you thought, it disappeared?

After The Inning Ended, The Kids Gathered By The Fence, Arms Reaching Into The Night, Asking For A Game-Used Ball

It’s the rushing & the way the rushing
ends. It’s the suddenness of it — first the crack
of bat on ball, & then the realizing, the eyes up & out,
waiting to be on the receiving end.
It’s the disappointment, the softened lingering
after the ball goes to someone else or doesn’t
go anywhere at all. You spend your life
waiting for a moment that might offer a moment
that might offer a way toward light,
something brief — dust lodged in a windowsill,
the baseball’s seams caught & rising with dirt.
You want to know a thing is used before you love
it with all your love can allow. Always the child
who saves the caught thing in a case of glass.
Always the child who, later & older, having run out
of the cheap ones, breaks the case open
& takes the worthy thing back to light again.

The Minor League Catcher Is An Amateur Physicist

There is a way the grass looks when cut
around a curve of dirt that makes it seem an ocean
has advanced & then halted. & there is the sound
a ball makes when it is caught after being thrown
90 miles an hour across a garden of fine lines
that sounds like a zipper zipping back up a jacket.
For a long time, I grew up feeling nothing,
& then I felt something, & I had no words for it.
Newton’s Second Law of Motion states
that a body’s change in momentum relates directly
to the amount of force applied to it, like a bat
impacting a ball thrown from the mound,
& the way the ball springs backward faster & then
even further — over the grass, the fence, the rusted ad
for the Owl Diner on Appleton Street in Lowell, Massachusetts —
until where it came from means less than where it went.
I have always thought the point of dreams was chasing them,
but then I stood barefoot, watching the lights above
an empty field burn out until it was only the memory of light
that kept me from seeing the dark. & then I saw it,
& could’ve sworn my name was not my name.
I knew a man, older, who was afraid to cry.
After a game had ended, he stood alone
on the pitcher’s mound, waiting for each teammate
to descend into the earth, & cried the lonely cry
of someone pretending they had a cold.
When a bat strikes a ball, the ball leaves the bat
at a higher velocity than it left the pitcher’s hand.
When I was younger, my father whipped me
but I wouldn’t budge. This is why sorrow is a long day
ending without dusk. A sun dropping off a cliff
into a cold, dark sea. In the end, humans are the air
between things & not the things themselves.
When change is happening — the ball off the bat —
we are moved or not moved, the wind rushing
around the change or the dead air underneath.
Either way, there is a fence & a field, & beyond
that fence, another field. In order to move,
I need to be struck by a dream that moves me.

Devin Kelly is the author of In This Quiet Church of Night, I Say Amen (Civil Coping Mechanisms) and the co-host of the Dead Rabbits Reading Series. He is the winner of a Best of the Net Prize, and his writing has appeared or is forthcoming in Longreads, The Guardian, LitHub, Catapult, DIAGRAM, Redivider, and more. He lives and teaches high school in New York City.

Jordan Cooley (she/her) is a Houstonian transplant growing in Austin, TX. Currently, she is the co-founder of The Friction, a teaching artist for Austin Bat Cave, a writer, and an artist. Her work often focuses on how trauma lives in her body, as well as all matters of family. She also slings drinks behind a bar and can make you a mean cappuccino at Better Half. You can find more about her life on her personal Instagram and Twitter and more of her work at her website, www.jrcooley.com.